Anthony Bourdain was a ‘Bad Boy’ who was always learning, and trying to make the world just a little better 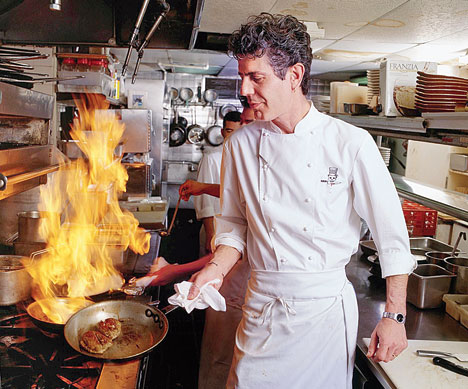 When Anthony Bourdain visited the San Francisco Bay Area in 2015 for his CNN show Anthony Bourdain: Parts Unknown, he made a point of sitting down for a meal with one of the founders of the Black Panther Party, Bobby Seale. And he didn’t just talk about the food. He provided viewers an astute history of the group, its important role in the black freedom movement and the African-American community, and its suppression by the government.

I first watched that episode while at an airport waiting to board a flight, at a time when the Black Lives Matter movement had only recently entered public consciousness. Bourdain — Tony to his friends — coolly narrated that the Black Panthers’ demands were “shockingly moderate: equality in education, housing, employment and basic civil rights”, an accurate statement but one that contradicts the misguided public perception of that unfairly demonised organisation. I looked around at the group of mostly white Americans sharing my television screen, awed by how casually radical Bourdain’s commentary was.

Friday morning, when I heard of his death in France at age 61, I immediately rewatched that episode. I thought of how the world has lost more than a talented chef, writer and media personality. We also lost a man who brilliantly and bravely wove political education into food culture in a way that provided the kind of historical context and compassion for the oppressed that Americans need now more than ever.

In an era in which “woke” has morphed, for some, into a derisive term for those who are too earnest about injustice, Bourdain delivered this kind of insight effortlessly and without repentance. It was a secret ingredient baked into his every episode, and served to viewers whether they’d ordered it or not.

Throughout his career, Bourdain called for respect for immigrants, without whom, he never let us forget, the restaurant and agricultural industries in the United States would screech to a halt. During the presidential campaign, Bourdain did not shrink from assailing Donald Trump’s proposed wall at the Mexican border as “ludicrous and ugly”, and declaring we should be “honest about who is working in America now and who has been working in America for some time”. He argued for recognition of the value, creativity and labour of non-white and immigrant chefs, noting that it “is frankly a racist assumption that Mexican food or Indian food should be cheap”.

On both Parts Unknown and his earlier Travel Channel show No Reservations, he treated the people of the places he visited with compassion, modelling how to respect other cultures without exoticising them. In Vietnam, a place he called one of his favourites, he offered a lesson on colonialism, war and American intervention. Likewise during episodes focused on Colombia, Iran, Cambodia and Sri Lanka, he would marvel at the beauty, the food, the literature and the generosity of the people. Then in the next breath, he’d contextualise stereotypes Americans might have about these cultures with lessons on Western imperialism, political violence and dictatorial regimes.

He also scrutinised inequality at home. He pondered the uniquely American history of Detroit, with insights about race, migration and gentrification. He exuded genuine respect for all of the people touched by these issues, discussing their history not with pity, but with nuance. Perhaps most remarkably, he did all this while also making us laugh.

His work represented a beautiful merging of love of food with an earnest effort to listen to others, especially marginalised people. After he visited Gaza, he openly criticised what he saw as the dehumanising representation of Palestinians in the media, and proclaimed that the world was “robbing them of their basic humanity”.

Bourdain didn’t limit this inclusive and compassionate worldview to his television shows. He aligned himself with the rights of LGBT people, starring in an ad in support of marriage equality for the Human Rights Campaign and signing an amicus brief by a group of food industry professionals supporting the gay couple at the centre of the Masterpiece Cakeshop case. He became an outspoken advocate of the #MeToo movement, and an ally to women who experienced harassment and assault, forthrightly labelling Harvey Weinstein a “rapist” and sardonically calling out other powerful A-listers who remained silent on these issues. Here, he was doing the public messy work of tackling toxic masculinity, homophobia and misogyny, which he admitted had shaped his own life and actions.

Bourdain was not just curious about food and the world. He was aware that injustice and inequality are systemic issues, and he never shied away from pointing that out. He regularly humbled himself before people very unlike him, he asked careful questions, and he listened. Before our eyes, he was always learning, and trying to make the world just a little better.

We live in a time when the simplest protests against racial injustice by athletes and celebrities are considered divisive, and when admitting imperfection while striving for righteousness and truth makes you a rebel. Perhaps that partly explains why people called the curious and empathetic Bourdain a “bad boy.” If that’s the case, let’s have more like him. May his compassion and indignation live on.