Advertisement
Home / Culture / To give the dead their rightful due

To give the dead their rightful due

Of course, but amid their memories life must go on 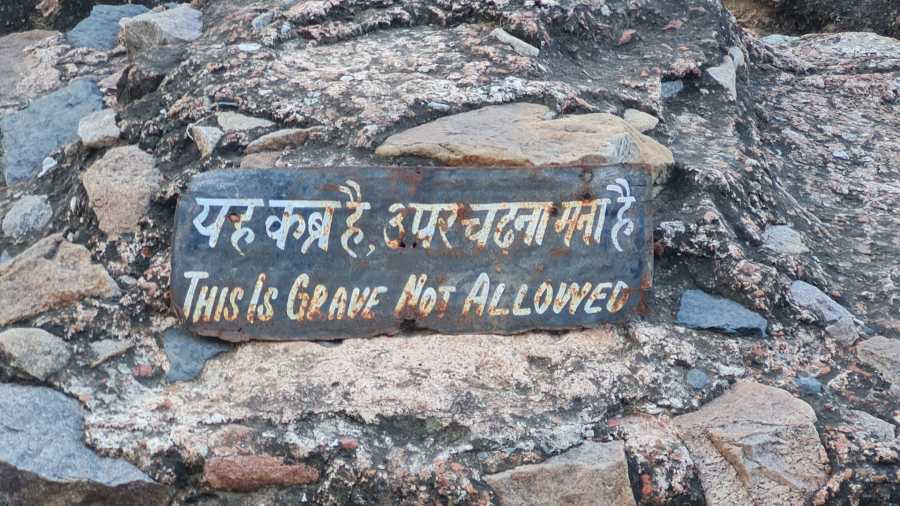 A rather grave notice may greet the wandering eyes of those strolling across Delhi’s Lodi Garden. Curt, almost icy in tone, the notice stuck on what they say is the grave of an amir during Sikandar Lodi’s reign reads: “This is grave Not Allowed”. Whispers in the garden say a miffed regal spirit may have, indeed, spoken through the missive. But why exactly are the occupants of the twilight world at Lodi Garden indignant?

Could it be because graves are losing their gravitas?

Well, Lodi Garden is a bit of a cheerful spot. On a recent spring evening, with the light turning golden and the weather deliciously Mediterranean — neither too cold nor too hot — the Bada Gumbad complex had been taken over by those in high spirits. Young lovers pouted into their mobile phone cameras and shot selfies. The ones who appeared to have taken their bond a notch higher — the Tribe of the Betrothed — were sashaying past memorial stones — the cameras of wedding planners following them like hounds — to get their steps right for the imminent pheras by the fire. A pair of fitness freaks, who had, evidently, been there and done that had radically merged the lines between the private and the public — the man had his partner balanced on his raised legs: after he had finished with his heaving, the woman — laughing — began her exercises, her husband serving as the weights.

For a moment, the mausoleum, unlike the world outside, had become a welcoming gender-equal space.

The joie de vivre had got to Lodi’s other occupants as well. Rotund mongrels ran amok among the happy-go-lucky humans, their tongues lolling and eyes glinting with joy, earning a biscuit here or some potato wedges there for their dog tricks.

The kites, solemn creatures during foggy winter evenings, seemed content too, as they perched themselves on that signature, solitary dead tree. You could almost spot a grinning beak or two as the birds watched over a park full of shiny happy people.

Meanwhile, about three kilometres away from Lodi Garden, on another evening, another mausoleum, Humayun’s Tomb — several Mughal emperors, their wives and other nobles are resting here — was awash with a different, quieter kind of delight. A group of birders prowled the premises noiselessly, watching with wonder the noisy parakeets, a shrill brain fever bird, some melodious spotted doves. Two old men — shatranjis — sat in the emerald shade of the garden, their gaze away from the emperor and towards their chess board. Near the wilder, unkempt stretch, past the Kotla Isa Khan Niazi, three visitors stood enchanted by the sight of light leaking through the darkening leaves.

Of course, this is not to suggest that every graveyard is filled with gaiety. The Nicholson Cemetery, established in 1857 near the Kashmere Gate, lined with gravestones, is a solemn space. As is Kohima’s War Cemetery, where, if one were to stand during the inky hour of dusk, one can apparently hear the sighs of soldiers who had fallen on Garrison Hill during World War II.

Jharkhand’s McCluskieganj, that broken town guarding the broken dream of a novel Anglo-Indian settlement, is pockmarked with smaller, unmarked, unadorned graves of people who lived — and died — searching for a home away from home.

Neither does Delhi have a monopoly over cheerful cemeteries. The Calcutta of the mid-1990s had a graveyard that was a rather gay spot: the South Park Street Cemetery. Many a recess hour at school was spent among the ornate tombstones devouring not just the details of the lives and deaths of Henry Derozio, Elijah Impey and William Jones but also savouring the first heady rush of juvenile romances — adolescent boys and girls dreaming of a life ahead amidst death, empty liquor bottles and the occasional syringe left behind by drug addicts.

Are the lovebirds at the Park Cemetery or, for that matter, today’s merry men and women at Lodi Garden encroachers? Does their happiness desecrate the dignity of the dead?

There is perhaps another way of looking at joyous lives among the dead. Their pursuit of pleasure and happiness among synagogues of sorrow could well be a courageous, but ultimately futile, defiance of looming mortality. By meeting, loving, sharing — living — life among the departed, they are, in effect, acknowledging all that is fleeting, beautiful yet broken in our lives. That takes some spirit.

That spectral, sullen amir from the time of Sikandar Lodi should perhaps rest in peace.