Saying goodbye to the Volkswagen Beetle

The Beetle will bow out of the Volkswagen portfolio in 2019. Here is a zip through its 80-year run 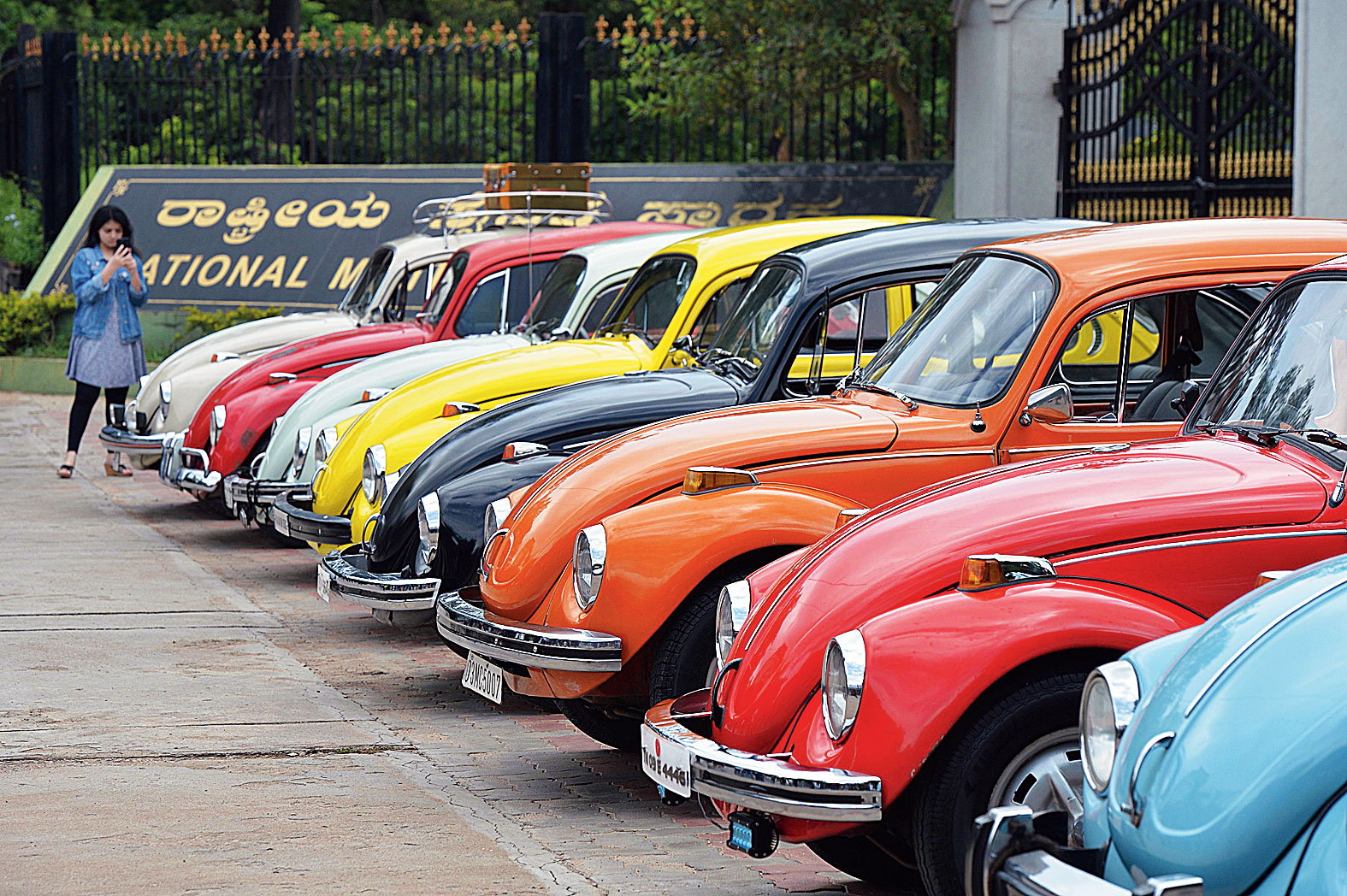 In this file photo taken on June 24, 2018 vintage Volkswagen Beetle cars are parked in a row during a rally held as part of the 23rd anniversary of "World Wide VW Beetle Day", in Bangalore.
Manjunath Kiran
Abhijit Mitra   |   Published 13.10.18, 04:00 PM

The body-on-chassis construction of the Beetle with its flat floor pan allowed for different body styles to be built. A lot of DIY-ers, especially in the US (typically California), built beach buggies on the underpinnings.
Agencies

The 1999 iteration of the Beetle harked back to the original shape, and had a little vase on the dashboard for a flower as a throwback to its glory days as a flower power vehicle with psychedelic blooms painted on it. But purists have never accepted it as a real successor to the original for a variety of reasons, not least of which was the water-cooled front engine and the car’s VW Golf underpinnings.
Agencies

Old Volkswagen Beetle cars lined up in a large yard for impounded cars in Mexico City. Mexico was the last country in the world where Beetles of the original shape — with changes over the years — were manufactured
Omar Torres/AFP

On September 13, 2018, Volkswagen of Germany announced that it will discontinue its ‘Beetle’ line of cars, the first of which had been made in 1938. Ironically, the conceptualisation of this much-loved icon was steered by one of the world’s most hated men — Adolf Hitler. He wanted the Beetle to do for personal transport in Germany what the Ford Model T had done in the US.

Ferdinand Porsche had designed the Beetle to be a five-passenger car which would be cheap to buy and run. That it would eventually be, but first it would be used to make military vehicles during World War II, and it’s flat-four, air-cooled engine would make it ultra-reliable. After the war, it was the British who put the car into production for civilian use. And the man responsible for doing so was Major Ivan Hirst.

It’s not very clear why the Beetle became so popular across continents, but its production spread to the Americas, Africa and Australia. The original ‘Bug’, as it lovingly came to be called, went through small changes in look and equipment over its 50-plus-year run in Europe before it was replaced in 1998 by the New Beetle. But production of the original model continued in Mexico for five more years.

In a decade, the new model would change shape once more, which would remain till the end of the run for the moniker next year.

It would also be adapted as the Schwimmwagen, or the swimming car, an amphibious vehicle that used a propeller to cross water bodies like a boat
Bundesarchiv

The Beetle Dune that was introduced in 2015 tried to evoke the heritage with a further change of shape as well as a name that was reminiscent of the original’s days on the beach. But it wasn’t exactly either. Two more special editions are on their way before the curtain finally comes down on the name next year.
Reuters

German chancellor Adolf Hitler inspects the new Volkswagen ‘people’s car’ at the Fallersleben car factory on May 27, 1938. On the right is the car’s designer Ferdinand Porsche
Agencies

The Volkswagen Beetle was the basis for military vehicles during World War II. The Type 62, which resembles the Beetle most closely, was the prototype for a light go-anywhere vehicle
Agencies

British army Major Ivan Hirst drives the 1,000th Beetle off the production line in Wolfsburg, Germany. Little did he think that the car would pick up a name that would continue for another 70 years!
Agencies

With the changes demanded by the German army, it became the Type 82 Kubelwagen, or ‘bucket car’ that the chief of the Afrika Corps Erwin Rommel would go on to say had saved his life since it could ride over landmines without setting them off
Thinkstock

At the other end of the spectrum were the Karmann Ghia coupe and convertibles, which were designed by Italian auto design studio Ghia and fabricated by German company Karmann. Since they too used the small Beetle engine, the cars weren’t quite as fast as they looked.
Agencies

One of the ways the Beetle got into popular culture was through the movies. Herbie, a Beetle that sported the number 53 (top), was the star in a number of movies made between 1968 and 2005. It had a mind of its own and did things impossible for any Beetle to do in real life. In the 1968 film Bullitt (below), a green Beetle keeps appearing throughout a high-speed car chase involving Steve McQueen in a Ford Mustang and the bad guys in the Dodge Charger. The Beetle appears at least three times in different places and has now become as famous as the muscle cars that are at the centre of the scene.