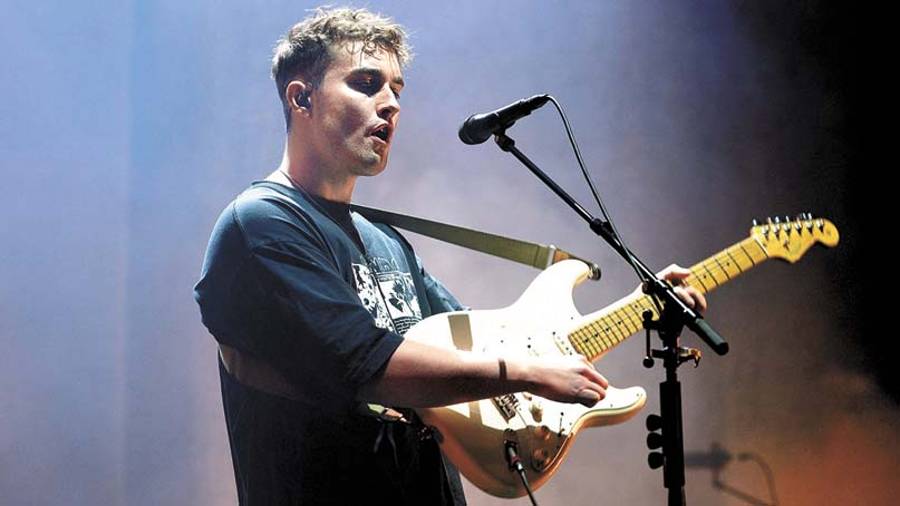 Sam Fender, a singer-songwriter often labeled Britain’s answer to Bruce Springsteen, realised his life had changed for good on Halloween.

This year he bought “eight massive boxes” of chocolate for any children who might knock on his door in North Shields, a working class town that sits on the banks of the River Tyne in northeast England.

Fender expected the stash to last all night, but it went almost instantly.

“Everyone in the neighbourhood was, like, ‘That’s Sam Fender’s house, let’s go knock!’” the musician recalled in a recent interview at his studio a short walk from the town centre, in a nondescript building surrounded by car mechanics’ workshops. The trick or treaters’ parents were more keen on getting selfies with the star than candy, whether they knew his music or not. “That scared us a bit,” he said. “It was just nuts.”

Over the past year, Fender, 27, has become one of Britain’s biggest music stars, but said he still doesn’t want to be “that guy” who is too famous to answer his door on Halloween — a position that touches on a tension running through his newfound success: how to be a star while remaining part of the local community that defines his songwriting.

His second album of anthemic pop-rock, Seventeen Going Under, released in October, quickly hit the top of the British charts, just like his debut did, and since then he’s sold out arenas, announced a 45,000-capacity outdoor show in London and charmed the British public by appearing hung over on morning TV.

For a few weeks this fall, the album’s title track sparked a TikTok trend because of lyrics — I was far too scared to hit him, but I would hit him in a heartbeat now — that speak to suffering at the hands of bullies and domestic abusers.

All that success had been built on the back of North Shields, a depressed town of some 30,000 people in a region where 34 per cent of children live in poverty, but is also home, Fender said, to some of “the funniest, most loving, caring people you’ve ever met”.

Fender sets most of his songs in the town, often referencing local pubs or fist fights on the nearby chilly beaches, and sings about his and his friends’ experiences, including troubled childhoods, male suicides and widespread political alienation.

Owain Davies, Fender’s manager who was also born locally, said Fender’s songs were “emotive and powerful,” but their subject matter allows them to “speak for a lot of people up here — a lot of us”.

Now Fender is in a sort of limbo, unable to have a normal life in North Shields or Newcastle, the nearest city, as he tries to navigate fame, even as he desperately wants to. “I’m bouncing between two complete opposites and I’m in a stage now where I don’t feel I belong in either of them,” Fender said, breaking eye contact only for bites of a chicken burger with copious mayonnaise he’d ordered from his local pub.

The thought of leaving home was difficult for an artist in the northeast in a way it wouldn’t necessarily be for someone from London, he explained: “We’re tribal. Anything from Newcastle that does good belongs to Newcastle.”

At a time when many British music stars attended performing arts schools and arrive primed for success, Fender’s route to fame is more illustrative of the barriers class can still present. Class has long animated music here, as a topic for songs and a badge of honour: The Clash made supporting workers’ rights part of its mission and the Sex Pistols sneered at the Queen; the Britpop battles of the 1990s pitted the middle-class Blur against the working-class Oasis, as the arty Pulp sang about posh outsiders slumming it with common people.

After initially growing up on a middle class street in North Shields, things became difficult, Fender said, after his parents divorced when he was eight. As a teenager, he lived with his mother, a nurse who had to stop work because she suffered from fibromyalgia, a condition that causes pain and fatigue.

“We were always having to beg, borrow and steal off anyone who could help her,” Fender said.

At 18, Fender was working in a local pub to support them both when Davies, the manager, came in. At his boss’s encouragement, Fender played the Beatles song Get Back followed by one of his own tracks.

Davies, recalling that moment in a telephone interview, said he’d drunk several pints of beer by that point but was still “totally struck by this incredible voice”. He immediately got on the phone to book Fender some proper shows.

“It feels like a Disney story when you tell it,” Fender said, adding, “Davies saved my life.”

What followed was far from a fairy tale of overnight success, though. For the next few years, Fender kept playing gigs and writing songs, “trying to figure out who I was,” he said.

Then, age 20, he became seriously ill (he won’t discuss the condition’s specifics) and sat in the hospital thinking, “If I’m going to die young, I want to make sure I’ve wrote something worth listening to.” Soon, he was writing songs about his life in North Shields.

This local focus has won him fans far from Britain. Steven Van Zandt, a veteran member of Bruce Springsteen’s E Street Band who regularly plays Fender’s music on his radio show in the United States, said in a telephone interview that Fender “could have taken the easy route” thanks to his voice and looks. Instead, Fender chose to sing “these intensely personal songs of working class life that had no guarantee of success,” Van Zandt said, calling that decision “courageous”.

Fender seemed overjoyed some of his heroes, who include Springsteen, loved his music, but in an hour-long interview, he returned to talking about his hometown again and again. At one point, he mentioned a campaign he led last year to stop the local council from charging people money for calling its emergency help lines for the homeless. After Fender took to social media to complain about the problem, the council promised to make the lines free.

“I sometimes feel like, ‘Am I really doing anything that good?’” Fender said. That was a rare moment when he felt he was, he said.

Fender insisted he would never leave North Shields behind and became visibly anxious when talking about the possibility. But Halloween night and other similar experiences had shown him it might be time to try living somewhere else for at least a few months. Somewhere that doesn’t feel like a “goldfish bowl,” he said, maybe New York, maybe London, somewhere that is “the opposite of where I’m from.” The only thing for certain was his songs wouldn’t change.

“You can take a lad out of Shields,” he said, “but you can’t take Shields out of the lad.”

Considered to be: In the same mould as Bruce Springsteen

Early life: He was educated at Whitley Bay High School and picked up the guitar when he was just 10

Spotted at: In 2013, Fender was spotted performing in the pub where he worked by Ben Howard’s manager Owain Davies

His other passion: He loves football and is a fan of Newcastle United

In his bag: Critics Choice Award at the 2019 Brits

Hits: Will We Talk?, Hypersonic Missiles, All Is On My Side, Saturday, Play God, Leave Fast, The Borders and Dead Boys