Rumble in the jungle

The striped stars stayed out of sight at Bandhavgarh and Kanha till the very last moment, says Supriya Newar 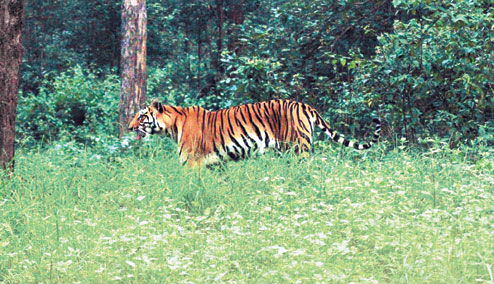 When the recommended cocktail for the evening is called Tiger’s Paw, the art gallery next door has a room dedicated to tiger art, and the stillness all around is broken only by the  call of a leopard, you are unmistakably in wild cat land! A four-hour drive from Jabalpur gets me to Bandhavgarh, one of the most popular national parks in the Umaria district of Madhya Pradesh, known for its high density of tigers as well as its rich biodiversity.

On the first day, I just ease myself into the surroundings. The sun is about to set as I take the wooden stairs, cut out of the branches of a large tendu tree atop which lies my room; my first remarkable experience of staying at a tree house. The tendu tree grows in abundance in the area and its leaves are used by the locals to roll beedis.

We meet early morning in pitch darkness at the reception for a cup of tea, rules and introductions. The dawn is yet to break as I get into an open-hooded Gypsy jeep for a four-hour-long game drive in Taala, the First Zone of Bandhavgarh National Park.

My driver and guide, Chowbeyji, has spent most of his life in the forests and starts a friendly chatter, just like the many forest babblers, kingfishers and drongos who soon come out chattering, announcing a new day. Just as we head out of the resort, we spot a wild boar family scampering away with its piglets, a supposedly good omen for sighting the big cat.

The forests of Bandhavgarh are lush green, having opened after the monsoons only a few days ago. The primary vegetation consists of bamboo and sal trees, the former serving as a great camouflage for the tigers and the latter known for its durable wood. “Sau baras khade, sau baras gadhe, phir bhi na sade (Standing tall and well-grounded for a 100 years without decay)”, expounds Chowbeyji, on the durability of sal wood.

Within the first few minutes of our drive, a barking deer gives out an alarm call. The Gypsy slows down and the guide explains that the barking deer calls out only if there is a leopard in the vicinity, and leopards are tough to sight because they tend to stay more on the cliff edges, away from tiger territory.

We continue to move on and frequently sight the spotted deer, a shy lot who mostly hang around in herds and dart off at the slightest movement. They are great friends with the many long-tailed, black-faced langoors that are an edgy lot; climbing trees, shaking leaves off branches that the deer chomp at.

Then, we also sight the largest of the deer family, the sambar, which likes to remain around the tall grass area. Only the males have antlers that they use both to attract the females as well as for protection during a fight. The guide also points out a sambar whose antlers are small and still growing with a velvety coat to them, providing it blood flow and oxygen for necessary growth.

The forest is an absolute maze of lanes and bylanes, often broken by natural water-bodies and tapering into sharp bends, rises and slopes. A Gypsy stops when it meets another to swap notes on each other’s sightings and any tip-offs on a tiger.

We are directed onto a pathway by another Gypsy, where we spot clear pugmarks only a day old. Disembarking from the jeep at any point is a strict no-no and the penalty for doing so is fierce. As Chowbeyji says, “It’s their home. We are the guests and we must behave properly.” The drive in Taala comes to an end with none of the 20 jeeps in the forest having had any tiger sighting.

After a much-needed bath, nap and a sumptuous lunch, we head out again in the afternoon. This time, we enter Magadhi, Zone Two of Bandhavgarh. As our jeep negotiates tall elephant grass, I’m told that the chances of sighting a tiger are far better in the summers, when the forest dries up and the cats have to necessarily come to the watering holes to drink. We’ve not had a ‘sighting’ till now but Chowbeyji remains optimistic. He tells me that I’m sure to see one as I’m visiting during the auspicious days of Navratri! As we exit the park, a large signboard with a grinning tiger reads, “Even if you haven’t seen me, I have seen you.”

My next stop is Mowgli’s Land or Kanha, the national park that was the inspiration for Kipling’s Jungle Book. Once again, I take it easy on the first day after the five-hour drive from Bandhavgarh, treating myself only to a leisurely evening walk in the villages, watching the sun come down and hundreds of cows with tinkling bells return home.

The morning air in Kanha is quite chilly and thoughtfully enough, our jeep comes armed with a light blanket which I put to use. This time, I’m accompanied by a young, studious naturalist named Samrat, who sets the game drive afoot by saying, “We will try for a tiger.”

The Mukki zone of the Kanha National Park terrain turns out to be much flatter than Bandhavgarh, with several large meadows of open grassland, a favourite for some deer. It is here that we spot the stunning hard ground swamp deer, or the barasingha, sitting quietly, its majestic antlers merging with the grass. Samrat says that this deer had almost become
extinct until some stringent conservation programmes were adopted for its protection. We also sight the Indian Bison or gaur, the world’s largest wild cattle, peacefully grazing.

My final safari is slated in the Kisli area of Kanha and, so far, though I’ve had lovely drives, chased pugmarks and alarm calls, enjoyed the rejuvenating air and greenery of the forests, the yellow stripes have remained elusive. After sighting a striking turquoise solitary Indian roller, nodding owlets and some wild peacocks that strut around, we start driving towards the exit point of Kisli as the park gates shut at 5:30pm. Samrat looks crestfallen for we are returning without having seen a tiger in a park that’s called Kanha Tiger Reserve.

Just then, at some distance we sense an animal close to a tree. We go a few steps further and, lo and behold, out of nowhere, we are gazing at the inimitable stripes of a full-grown five-year-old tigress. Immediately our driver stops the jeep and we hold our breath.

The tigress remains completely unperturbed, hardly noticing us. She appears to be relaxed, ambling around until she stops at a point to answer’s nature’s call — an extremely rare sight. In a hushed murmur, Samrat explains that by doing so, she has marked her territory to let other cats know that this area is hers. Her job done, she now focuses on her immediate environs, spots us and begins to catwalk towards our jeep, barely 15ft away. But not once has she snarled or given us a menacing look, and she gracefully turns left and merges into the tall grass, disappearing as effortlessly as she was sighted.

We all continue to remain dazed for a bit until the driver starts the jeep. The entire episode has lasted for only four minutes, but the memory of the tiger shining bright is sure to last a lifetime!

• How to get there: Fly from Calcutta to Jabalpur via Delhi on Air India or Spicejet. Bandhavgarh is a four-hour drive from Jabalpur and Kanha five hours from there.

• Where to stay: The Treehouse Hideaway in Bandhavgarh has  cabins atop tendu trees. Kanha Earth Lodge is a good option. Both are run by Pugdundee Safaris.

• What to do: Go in search of the big cat at the national parks.

Photographs by the author

If it’s winter it’s time for Beverly Hills to deck up. From November to January it celebrates holiday season. Store fronts and hotel lobbies are decorated and there’s live music too. The festivities kick off with the annual Beverly Hills Holiday Lighting Celebration on Rodeo Drive that’s often accompanied by faux snowfall.

This year’s attractions include Santa at The Paley and The Jolly Trolley. Mrs Claus will also give scenic tours of historic Beverly Hills sites and landmarks starting from the corner of Rodeo Drive and Dayton Way. On December 13, at Doheny Greystone Mansion, the Christmas Matters Holiday Carolers will sing carols in a capella quartet dressed in Dickens costumes. For information, visit lovebeverlyhills.com

Thai high Head away from the bustle of the city to Thailand’s quiet Hua Hin and a stay at the luxurious Amari Hua Hin. There’s a gamut of natural attractions nearby such as the Khao Sam Roi Yot National Park and the Phraya Nakhon Cave.

Amari’s Great Escape Package at Rs 35,200 (approx.) for two includes three nights stay in the Deluxe King room, airport transfers, a cooking class with an award-winning chef, and a 20 per cent discount at the Breeze Spa. For more information, visit www.amari.com/huahin