Advertisement
Home / Culture / Before the fall

What the Red Road used to be 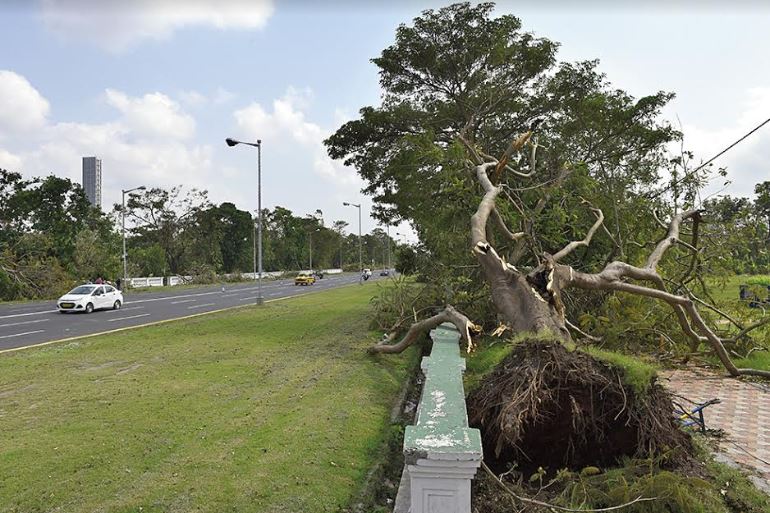 The Red Road is actually grey. It begins where it does, at the Raj Bhavan in Dalhousie, and runs for two kilometres or so, slicing through heaps of scenic green till Fort William looms into view.

Some called it Secretary’s Walk in the latter half of the 19th century, but since it came into being in 1820, the name Red Road stuck.

Today, there is very little documentation available to suggest the exact reason behind the nomenclature, but there are theories. According to historian Soumitra Sreemani, the road got its name from the red dust that would rise when vehicles sped down its length. He says, “Till 1912, the then lieutenant-governor’s residence was in Belvedere House and his office was in the Writers’ Buildings. The road was used to provide him an easy passage. It was meant for white men only.”

As history turned corners, so did the road’s fortunes. And today, it is most remembered for the metamorphosis it underwent in the war years.

On the midnight of December 20, 1942, Calcutta was shaken up when the Japanese air force dropped bombs. The city turned into a battleground.

As Calcutta became a war base, Red Road served as a landing strip for fighter aircraft. Sreemani says, “To facilitate easy access of the air force, a temporary airstrip was laid on the main road. For that purpose, the tram line on Kidderpore Road was diverted. The airstrip was used for roughly three years between 1941 and 1945.” One might say that for those years and many that followed, Red Road came to live its name. It turned a deeper red in empathy with war victims and still deeper from the outrage that burnt in the hearts of the survivors.

As an airstrip, however, it was far from perfect. “For one thing, the smoke and haze that habitually hung over the city often made it difficult to locate. Not only was it narrower than a regular runway, it was also lined on both sides with marble balustrades and, like any well-engineered road, it crowned in the middle,” writes Robert H. Farquharson in the book, For Your Tomorrow: Canadians and the Burma Campaign, 1941-1945. Imperfect perhaps, but still red. Farquharson adds with wry humour, “There was a high building at the north end of the strip and pilots taking off toward it could wave to the office girls as they flew past.”

Jayantilal Mehta, a Calcutta-based businessman in his late 80s, remembers going to the Maidan secretly to watch these airplanes; the city and its people had never before witnessed something like this. It is a story he tells his grandchildren to date every time they cross Red Road.

And then, post all the mayhem, the airstrip turned road again. Reads an article from December 1945 in the US daily, The Victoria Advocate, “A strong link in the wartime defence network of Calcutta — a fighter plane strip located in the heart of the city’s downtown section — has been returned to public use. Sixty-foot wide Red Road served as an RAF landing field during the dark days of the war. Calcutta residents became accustomed to speedy fighter planes coming in at tree top level over Old Court House Street and skimming the tops of the Great Eastern Hotel and the governor’s mansion. When the Japanese threat to Calcutta subsided, the road was used as a storage area for military vehicles and supplies.”

The Red Road journeyed on as a road.

At some point in the 1980s, it officially lost its old name and was renamed after Indira Gandhi. But to the people of the city it remained dear Red.

There is something to be said about the versatility of the Red Road. During Republic Day celebrations every year, it takes on the colours of patriotism — it hosts the ceremonial march by the armed forces. This is also the same stretch where thousands read the namaz on Id-ul-Fitr. The last few years, the Durga Puja carnival is held here. In May 2016, when Mamata Banerjee took oath as chief minister of Bengal for the second time, the Red Road was closed for a week for the first time since the war to facilitate preparation for the swearing-in.

Quite the variegated existence for a grey road with a red name.

Our march down Red Road in Calcutta