Bean-to-bar chocolate-makers are looking to woo chocoholics away from mass-produced creations with their tantalising handmade offerings, says Aarti Dua 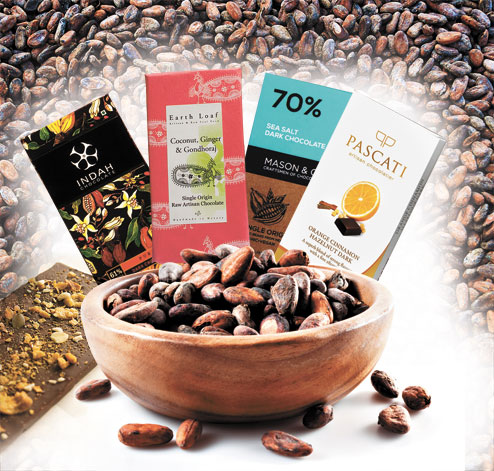 When Jane Mason first learnt to make chocolates while working as a raw food chef in Bali in 2010, little did she imagine that she’d be chasing her chocolate-coated dreams in India, which, unlike Indonesia, is hardly known as a cacao- or cocoa-bean nation. Jane moved to India in 2011 to live in Auroville with her husband, Fabien, who’s a sound engineer and who grew up there. But she never expected to find cacao trees — or to bring the international craze for bean-to-bar chocolates — here.

“I missed chocolates as I couldn’t find a single one that I could eat in India, either because it had milk and I’m vegan or because it was full of preservatives,” she says. So she began researching on cacao in India and soon, Fabien and she were visiting farms to source beans and make chocolate at home “as a hobby”.

After many trials and tastings — and much urging from friends — the Masons decided to raise the bar for chocolates in India by selling their hand-made 75% Dark and 75% Dark Zesty Orange bars from their home in Auroville in February 2014. The response was so huge that they quickly set up a factory and launched their Mason & Co bean-to-bar organic and vegan chocolates by July that year.

Around the same time in Mysore, alternative healing therapists David Belo and Angelique had also turned their home experiments of making chocolates — in an idli maker no less — into a grand passion for making small-batch bean-to-bar chocolates by hand, leading to the launch of their organic Earth Loaf chocolates in May 2014.

The couple had first moved from London to Mysore, where Angelique had learnt Yoga, in 2011 because of the “better weather” and the “attractive economics” for Belo to pursue the various projects “that I wanted to incubate”. Belo, who’s South African by origin, had worked in cocktail bars in London since he was 16 before becoming an artisanal bread-maker in 2010.

“Once I started making breads, I got curious about chocolate.  But it wasn’t until we moved to India and discovered there was cacao growing here that we looked at making bean-to-bar chocolate,” says Belo. He adds: “We fell in love with the lifestyle here first and chocolates just came to us.”

Now, two years after Earth Loaf and Mason introduced bean-to-bar chocolates in India, the movement has grown sweeter. New players like Luvin Paryani’s Indah in Pune and Devansh Ashar’s Pascati in Mumbai joined the party last year. Then, there are several local bean-to-bar makers like Pristine Chocolate in cacao-growing Kerala, who’re wooing chocolate lovers away from mass-produced chocolates. Even Austrian bean-to-bar major Zotter has a Labooko 62% India made from cacao beans from Kerala.

And in September, certified chocolate taster Nitin Chordia, who has been promoting artisanal Indian chocolates through his Cocoatrait platform for chocolate lovers, will open his Cocoashala chocolate school in Chennai. Apart from offering the UK-based International Institute of Chocolate Tasting’s certification courses for chocolate tasting, Chordia will launch India’s first bean-to-bar chocolate making course with certification from the same institute from January. He has even tied up with equipment majors Capco from UK and Chocolate World from Belgium to set up a lab-sized bean-to-bar chocolate making unit here.

“The bean-to-bar market in India may be small currently but it’s expected to show phenomenal growth,” says Chordia, who recently showcased the Mason, Earth Loaf and Pascati brands at the Chocoa Trade Fair in Amsterdam. “People were amazed to hear that the chocolates had been made in India,” says Chordia, who also distributes these brands in Tamil Nadu.

Globally, bean-to-bar chocolates have become a huge craze in the last 10 years with brands like Mast Brothers in the US and Duffy’s Chocolates in the UK acquiring a cult following. They’re called so because unlike other artisanal makers who work with available bulk chocolate, these chocolate-makers work from the raw cacao beans stage all the way up to roasting, grinding, tempering and moulding one-of-a-kind hand-made artisanal chocolates.

The idea is to bring out the flavours of cacao beans arising from a terroir, much like with wine grapes, and to retain its superfood health benefits, which get killed in commercial chocolates. The result is sinfully healthy, dark and bitter chocolate made in small batches.

So how about biting into an 85% Intense Dark bar from Mason & Co? Or, you can nibble at an exotic Coconut, Ginger & Gondhoraj bar or even a Chocolate Laddoo from Earth Loaf. Both Mason and Earth Loaf make organic and vegan chocolate. And, if you’d like something classic, how about tasting Indah’s 61% Dark Chocolate-Orange, or even Pascati’s Mint Dark?

Now, India’s barely a blip on the chocolate-making map — even if the British brought cacao trees here from Indonesia in the 18th century. But that isn’t deterring the players.

Take new entrant Indah’s Paryani, 24, who graduated from Ecole Hoteliere in Lavasa in 2012. “Most chocolates made in India are sub-standard and I saw a future in making chocolates,” he says.

So, in 2013, he went off to intern at craft chocolate-maker Big Tree Farms in Bali for five months. He spent the following year travelling to cacao farms in India and doing trial runs before launching his Indah brand — it means beautiful in Indonesian — in June 2015 in Pune with an investment of Rs 25 lakh.

“The response was overwhelming,” he says. Now he’s present in 25 stores in Pune and will launch in Mumbai soon. Meanwhile, Ashar, who launched Pascati — he named it after the Sanskrit term for a sweet meal, pascat pariveshya — in Mumbai, only got interested in chocolates in 2013. “I always wanted to open a restaurant,” he says. So, he first graduated in hotel management from California in 2009 and then worked with hotels like Taj Falaknuma Palace.

In 2013, shortly after joining his family’s copper wire insulation business, he got intrigued by “a piece of pure chocolate” that he ate. So, by May 2014, he got some cacao nibs (bits of roasted cacao beans) and made some “pala-table chocolate” in a modified idli grinder. It enthused him enough to consider a venture. “Like any Gujarati, I ran the numbers and figured you could make money from it,” he says.

So, Ashar did an online course from Ecole Chocolat and, in December 2014, he set up a small chocolate unit at his family’s factory in Daman. After successful samplings at farmer’s markets, he expanded it in May 2015, and launched Pascati in November.

Now, his variants like the Orange Cinnamon Hazelnut Dark are hits. He’s currently selling in clubs and hotels and also on Amazon. But he’s hoping to enter retail outlets soon.

Of course, the going hasn’t always been sweet. Jane and Belo recall how they struggled to get quality beans from Indian farmers who were used to selling poorly fermented beans to commercial brands. The Masons spent a year finding an organic farmer and then another year working with him on bean quality even before launching their chocolates.

And Belo even created his own machines. “My kitchen was full of PVC pipes and blowers. Then, I discovered that an idli grinder mechanically is the same device as a chocolate grinder from the 18th century,” he says. He sampled his chocolates with the international Yoga community in Mysore for 18 months before launching them.

Now, Earth Loaf and Mason are constantly working with farmers and experimenting. Over the last year, they’ve expanded their operations and added new flavours. They’re both selling in nearly 15 cities from Kochi to Calcutta today. Belo’s also exporting to Portugal and plans to target the UK next.

“We could be larger than we are but we’re focusing on quality all the way to the farm level,” says Jane. Her new variants include the bestselling Peanut Butter and Peppermint & Sweet Nibs bars. In March, the Masons also opened a café, Bread & Chocolates, in Auroville, where they’re serving even more variants like diabetic-friendly bars. Plus, they have just launched an organic drinking chocolate and a range of chocolate peanut butters.

Meanwhile, Belo, who’s always exploring Indian ingredients, has got new bestsellers in the Himalayan Fruit & Nut bars. And by Diwali, he’ll launch a single-origin bar made from cacao beans from Kerala.

Indah and Pascati are also expanding their menus. So Paryani will add chocolate-coated nuts shortly and Ashar, a cocoa powder.

Chordia expects the Indian bean-to-bar chocolates market to grow rapidly as consumers take to artisanal chocolates and as more makers come in. Already, he says, a growing number of Indians are interning at bean-to-bar majors like Dandelion in the US and Marou in Vietnam, besides taking courses in Belgium, France and Italy.

“Bean-to-bar is very serious chocolate making. So, for people to opt for such courses means that they’re serious. We’re opening Cocoashala to cater to just these people who’re already eager to learn,” he says. Cocoashala will have a production unit. “So, people can make a batch of chocolates themselves from bean to bar,” he adds.

Jane says: “Earlier, it was accepted that quality chocolate must be impor-ted chocolate. But now, consumers and stores are eager to promote the Indian chocolate movement.” Clearly, the chocolate-makers are confident that Indian consumers will take a bigger bite of the global trend and dig into dark, artisanal chocolate made from bean to bar.