Things to do as a responsible citizen while exploring Rabindra Sarovar 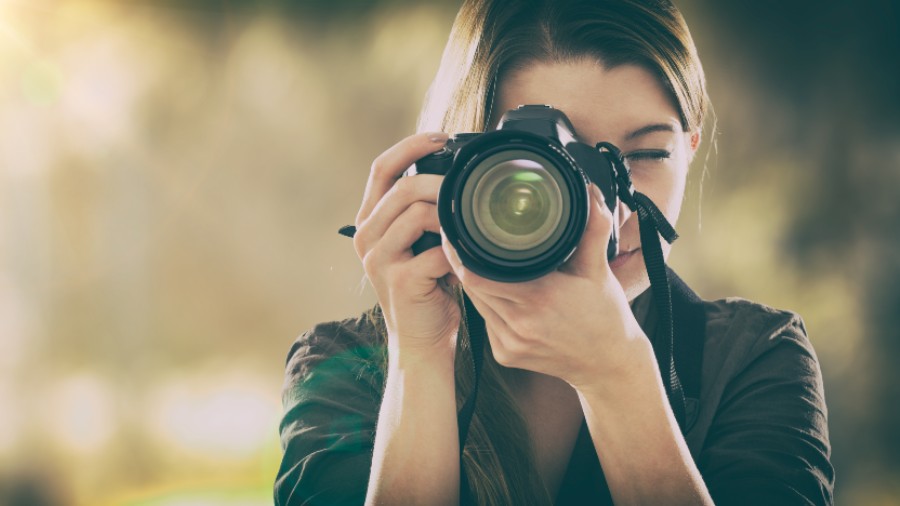 As soon as I had spotted the flycatcher, I sat on the nearest bench and took out my camera. I kept looking for the tiny bird through the view finder. Suddenly I heard deep breathing and the sound of a zipper. Walker or jogger, I wondered. Curiosity got the better of me. I took a quick glance to see a frail, bespectacled, middle-aged  gentleman with a friendly smile and a well-thumbed copy of Salim Ali’s The Book Of Indian Birds.

“Good morning, I’m Ghosh. What you are looking for is called a Taiga flycatcher. A long-distance migrant, a trans-Himalayan flier. It’s easier to find if you follow its call,” he said. One of the members of a group of morning walkers passing by called out: “Ki Ghosh babu, notun murgi?” (“New quarry, Ghosh babu?”) Having got my shot of the flycatcher, I decided to start my photo walk.

“Did you know this is an artificial lake spread over 192 acres of which only 38 per cent or 73 acres is occupied by water bodies? It was excavated around 1920 under the leadership of Cecil Henry Bompass and was initially called Bompass Lake. Then, for some time, it was called Dhakuria Lake and, in May 1958, it was officially named Rabindra Sarobar. Interestingly, this area used to be a malarious marshy jungle which was transformed to encourage people to shift towards the south of Calcutta. Hard to believe now, isn’t it?” Though I wanted to concentrate on things around me I realised that this gent was a source of nuggets of interesting information.

A swarm of dragonflies caught my eye and I leaned over the edge to get a better picture. “Be careful. Though this misguided beautification of the lakes has improved aesthetics, I am not in favour of concretisation of the riparian zone. It has affected the lives of snails , frogs, snakes and so many other creatures. It will disturb the web of life. The ecological balance.”

My bewildered look promptly led Ghosh babu to continue, “Oh, riparian zone is the area where the bank meets the water.” Without stopping he continued, “I am not happy with the system of bank protection. Ha, ha, not those banks. I would have suggested bamboo piling for shoreline protection. By the way, do you know that 13 different species of dragonflies have been recorded at the lakes? And the one you just photographed is called a common picture wing.

While the laughing club exercised their bellies, the state bird, the white-throated kingfisher, joined them in what seemed like a hilarious chorus. Nice start to my walk. The brilliant blue stood out against the nice green background. I was happy with the picture. “Though called a kingfisher, this bird feeds on a wide range of prey that includes small reptiles, amphibians, crabs, small rodents and even birds. Ah, birds! Did you know the Sarobar attracts more than 107 different species of birds of which 23 are long-distance migratory birds and 14 local migrants. Sixty-nine species are resident and we have one summer visitor. You will find out which one, won’t you?”

After some time I found the constant barrage of information quite distracting, but a part of me was getting used to it. I dare say I even enjoyed these sessions of verbal diarrhoea. So on he went. “Even though the Sorobar acts as the lungs of this part of the city and soaks in the carbon dioxide, over the years this ecosystem has become fragile. The dumping of kitchen waste has led to the increase of phenol levels in the water as has the levels of pathogenic bacteria because of the human and animal waste being dumped into the water. Do you know the squatters used the lake water for years for washing, bathing and cleaning of utensils. I hope you understand the difference between the BOD level and COD levels of water.” I made a quick mental note to Google it.

I had spotted a blue-throated blue flycatcher and had literally run away from the constant stream of information, most of which I didn’t understand, at least not totally. Thankfully, the flycatcher showed me some mercy and sat quietly while I tried my best to take a picture.

“Initially, I thought water hyacinth would be helpful. But left unattended it spreads very fast and becomes the dominant hydrophyte. But I sincerely believe bioremediation using continuous laminar flow inversion and oxygenation may be a viable solution.” At this point a dull throbbing had started at my temples.

But, somehow, Ghosh babu was proving lucky for me. I spotted a small family of six mongoose. But they seemed scared and moved around very fast. I decided to quicken my pace and trained the camera on the family of six, which now moved in a single file, one behind the other almost like a train.

From somewhere in the distance Ghosh babu’s voice followed me: “And did you know that they had introduced a toy train in 1985? It was operational till 1989. And the 10th International Film Festival was the reason that the OAT (Open Air Theatre) was converted into what is now known as Nazrul Mancha, a covered auditorium.” Apparently something to do with noise pollution he said.

And suddenly a pair of common hawk cuckoos got all romantic and noisy. Ghosh babu had caught up with me: “The hawk cuckoo is also called fever bird.” And a few butterflies. “That’s a common jezebel, one of the 57 species found here,” he said with a smile. “And the yellow-and-black one you just beautifully clicked is called a plain tiger. And while you were concentrating on the butterflies I’m sure you didn’t notice the Hariyals (yellow-footed green pigeons), that have just perched on the tree to your left.” I was starting to like this man. “Or the coppersmith barbets gorging on the figs.” For a middle-aged man he sure had great eyesight.

The day got better as he spotted a blue-throated barbet while I was engrossed by a palm squirrel collecting used masks, probably to make its nest. I then got a little greedy. “Could you spot a few owls for me Ghosh babu?” I almost pleaded. And sure enough, within five minutes he was pointing to a spotted owlet high up in a tree. It seemed to be sleeping. A woman’s singsong voice then said: “But you’re not sleeping.” Immediately, the owl was wide awake. Strange.

Almost on cue Ghosh babu continued: “Do you know that the three islands in the middle of the lake were formed out of the earth that was excavated while creating the lake. The highest point is 21m above sea level, which apparently is the third island from the stadium side. But the trees of the islands have got denuded by the guano excreted by the roosting birds.” Thankfully, I could focus on a mother cormorant feeding its hungry chicks. “Birders are rather strange. They fall in love frequently. This love affair is scary, an obsession that is not swayed by commitments, time, the weather, the virus, or what have you. It is all-consuming, focused but temporary.”

And suddenly out of nowhere the Indian paradise flycatcher came and perched close by. Its long ribbon-like tail creating magical patterns behind it. I had been closely following this bird for months now, mesmerised by its transformation. Ghosh babu continued: “Tell me you got a shot of the brown-breasted flycatcher as it caught the common jay butterfly.” My smile said it all. A lizard basked in the sun nearby and I quickly took a few shots. If you stand close to the mulberry tree or the ficus tree, the birds will surely come to feed. And sure enough, before he could complete his sentence, a few noisy chestnut-tailed starlings flew in to gorge on the ripe mulberries.

Up ahead, a large number of photographers huddled close together, jostling for space in the quest for the perfect shot. “Quick, we must move fast. I bet they’ve spotted the elusive and shy Indian pitta. While we were rushing towards the group I notice something slithering nearby among the dead leaves. A rat snake. Thankfully non-venomous. Ghosh babu had spotted it too. “Do you know the difference between venom and poison?” Another mental note to Google it when I reach home.

By now a fairly large crowd had gathered, mainly photographers but the number of curious bystanders too with mobile phones in hand. Suddenly, they all moved towards the entrance to the toilets bordering the Safari Park. I decided to follow them. Ghosh babu held me back. “The pitta will come back to this spot.” I chose a good spot and set up my camera. Suddenly a group approached us. “Hi, I’m Pushpendra. That’s Pankaj, Bobby, Rajesh, Rahul, Roop and Nilanjan. We are regulars. What exactly are you trying to photograph?” Ghosh babu explained how the pitta visits Rabindra Sarobar at this time of the year for a brief period before returning to its cooler home at a higher altitude. It stays for a few days only, hence the excitement and everyone trying to seize the opportunity to get a picture. The group couldn’t quite comprehend what was so important about that one particular bird and moved on.

“Have you photographed the rose-ringed parakeets?” enquired Ghosh babu. Actually I had. They are one of my favourites, always up to something. You just need to patiently wait. They will surely oblige. The fruit of the Manila tamarind or Madras thorn were ripe red. They attracted a small flock of parakeets which quickly proceeded to devour the delicious fruit. I watched as a male carried some to a female sitting close by.

“Do you recognise that call?” asked Ghosh Babu. Hill mynas, I had heard them while parking the car this morning. Apparently, a couple feeds them idlis of all things. They seem to enjoy them. Their range of calls is quite extraordinary — screams, squeaks, chirps and whistles. Sadly their numbers are threatened by the cage bird trade. While I was busy observing and photographing the fascinating biodiversity of Rabindra Sarobar, Ghosh babu had filled his jute bag with trash that had been carelessly and irresponsibly scattered on the premises. “The guards are trying their best but the citizens need to be more responsible,” he said.

While I walked back to the car I thought of all the stuff that Ghosh babu had mentioned — cleaning the premises, planting more trees, improving the quality of the water of the lake and responsible photography. Once inside, I looked for my pencil to make a note of these things. Now where was my pencil? Did I give it to someone? Age, it was catching up fast. Real fast. I couldn’t help but smile at what Ghosh babu said just as I was about to leave — “You should sit in nature for 20 minutes a day unless you’re busy, then you should sit for an hour.” True. Very true. 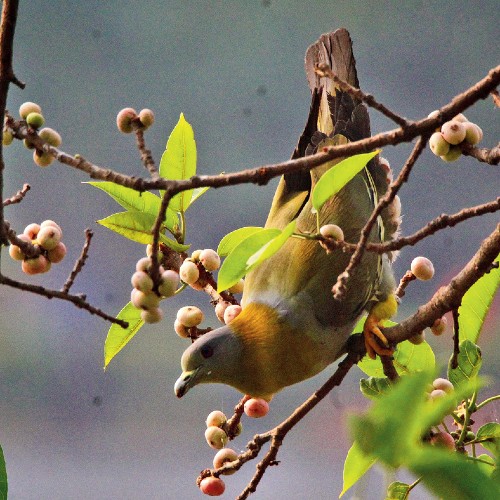 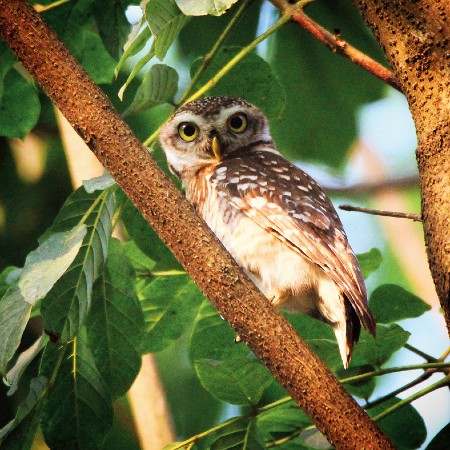 Spotted owlet woken up by the sing song voice 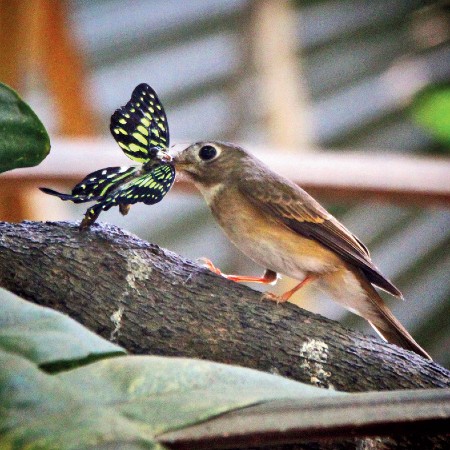 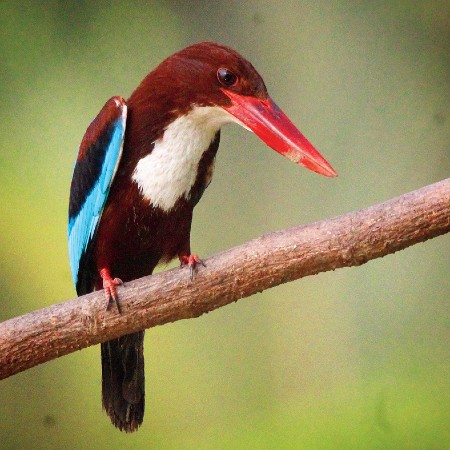 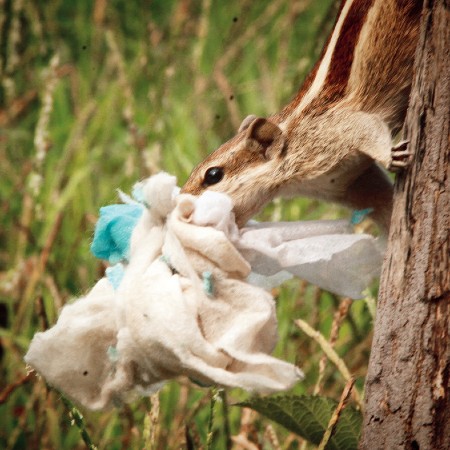 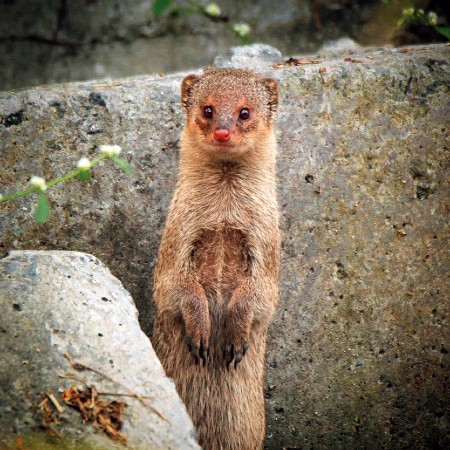 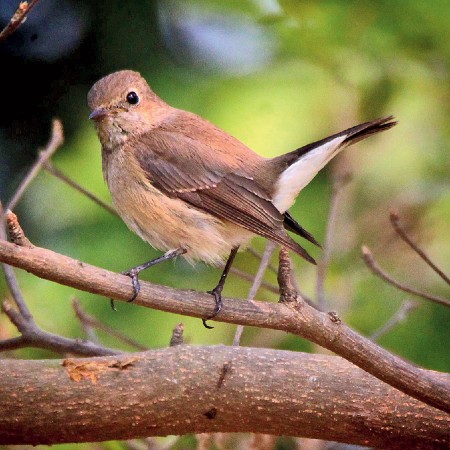 A cute Taiga flycatcher poses for me 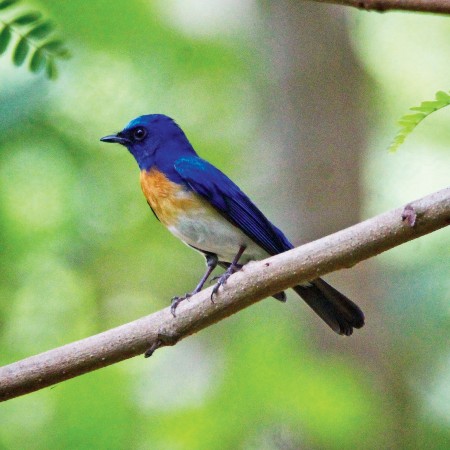 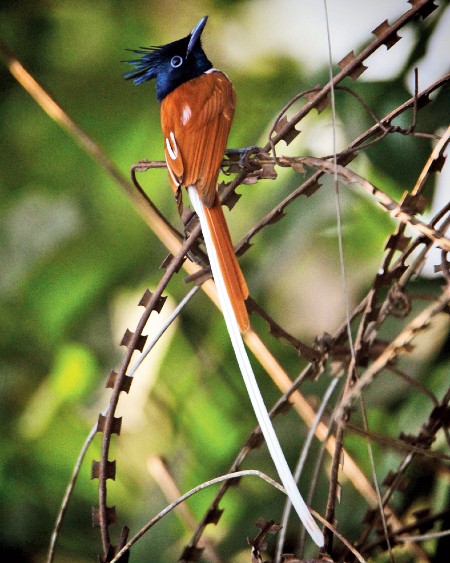 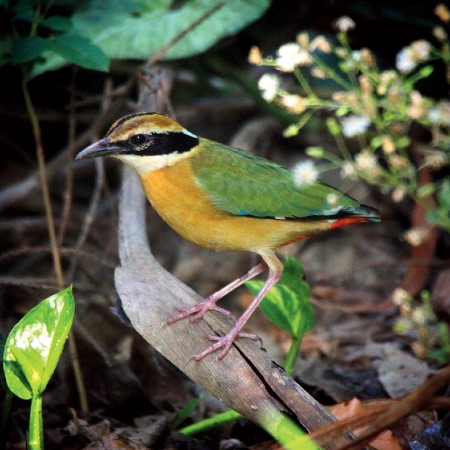 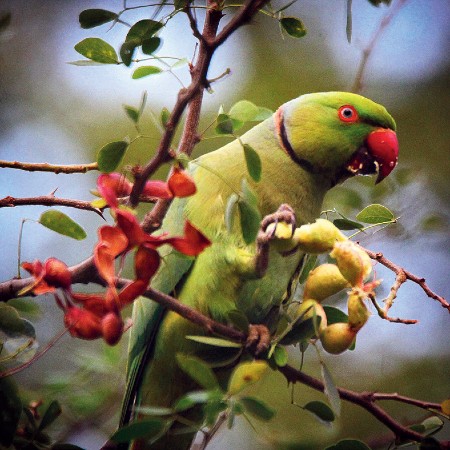 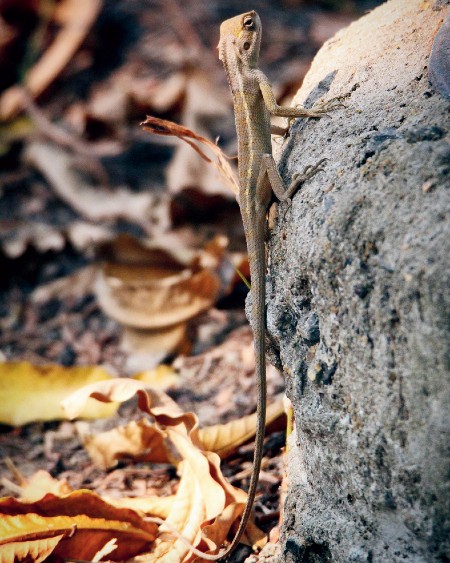 A lizard catches the first rays of the morning sun 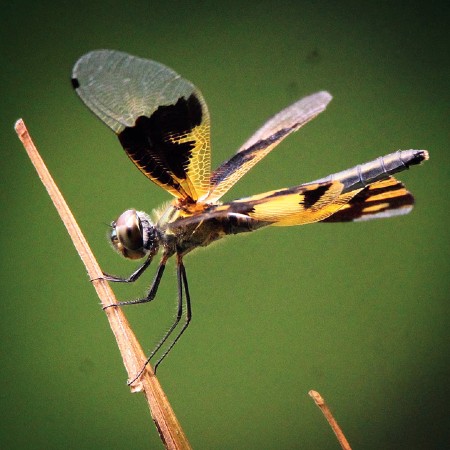 The author visited the Rabindra Sarobar Lakes before the lockdown. The Lakes have been shut for visitors since end-April