An old and popular form of entertainment with new strings attached 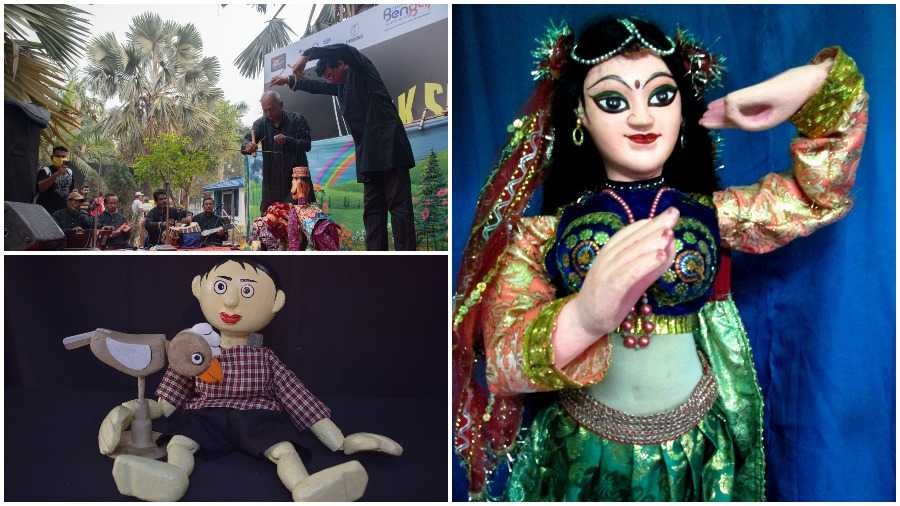 DILLY DOLLY: (Clockwise from above) A puppet circus show by Ranjan Ray; a dancer from Nirapada Mondal’s collection; a character from the play Chi Chi Land by Sudip Gupta
Sourced by The Telegraph
Moumita Chaudhuri   |   Published 29.08.21, 02:42 AM

Ganesh Ghorai is a puppeteer from Nandakumar in East Midnapore. He was barely seven years old when he started out in the profession. Says Ghorai, “I am in my fifties. I do not have a birth certificate but that is what my Voter Identity Card says. The last 40 years I have lived with my puppets. I have 12 of them, beni putul or shadow puppets.”

Glove puppets, according to Ghorai, are versatile. “You can carry one of these in a bag, take it out on the road and stage a show when you feel like it. People respond enthusiastically.”

There are four kinds of puppets in India — rod, string, glove and shadow puppets. Of these, the first three are common in Bengal. Midnapore is famous for beni putul, Joynagar in south Bengal for dang putul (rod puppet) and Krishnagar in Nadia district is known for tarer putul (string puppet).

Puppetry in its initial avatar was one of many rustic arts used to entertain. But Ghorai’s father used to be involved in jatra or folk theatre. Says Ghorai, “As a boy, I would accompany my father and I would dress up as a girl and dance. And then my father died and my life changed.”

Ghorai became an apprentice to a puppeteer. He learnt to sing and handle the glove puppets. But just as he was going to strike out as a professional, his guru left the profession. He says, “The Radha-Krishna puppets were made by him. He handed them over to me and asked me to go on earning whatever little I could from the two puppets.”

In a two-day festival organised earlier this year at Calcutta’s Madhusudan Mancha, puppeteers from all over Bengal came together to celebrate World Puppetry Day. Nirapada Mondal, 55, a puppeteer from the Mayahowri area in Joynagar, was among the participants.

Mondal is a third-generation puppeteer. His daughter Swarnashree, a second-year student of Calcutta’s Government Art College, is also learning the art form. Says Mondal, who is a college dropout, “Dang putul is one of the oldest forms of puppetry. From what I have heard from village elders, it is 500-600 years old.” Most likely, the concept of rod puppets came from scarecrows.

He continues, “My forefathers used to stay in remote villages. Those days it was the puppeteers who would entertain people and pass on social messages. They took recourse to mythical stories to talk about morals and social mores.” But with time, the dependence on mythology has apparently reduced. When Mondal started out as a puppeteer, he adapted stories of Alibaba and the Forty Thieves, Mowgli and so on and so forth. These days, he picks issues related to community health, family planning. Recently, he did a show based on Kanyashree — a state government initiative for the education of the girl child.

It is clearly a trend. Ranjan Ray, a string puppeteer from Hanskhali in Nadia district, uses his shows to address issues such as child marriage, forest preservation and human trafficking.

Alongside the stories, the craftsmanship behind the puppets has also changed. As a child, Ghorai could barely handle the heavy clay puppets. “The heads of my dolls would tilt,” he sniggers. Now he uses paper to make the heads; the hands are fashioned from wood. Mondal’s dang putul has colourful dresses. Ray’s string puppets are now completed with shola.

According to Ray, earlier there were doll-makers who would come home and make the puppets. But as these artisans moved on to other, better paying trades, he started making his own puppets. As for lighting, paraffin lamps were used in the old days. He says, “It was bright but monotonous. Now we can use different kinds of lights.”

At the puppet festival in Calcutta, puppeteer and festival organiser Sudip Gupta presented Chi Chi Land, a show of string puppets. Gupta tells The Telegraph, “Earlier, we did not go for stories with direct political references.” His 2016 production Shakuntala was about environmental pollution. It portrayed Maharaja Dushyant as the person who comes to the abode of Shakuntala and destroys the nature that Shakuntala has nurtured with her own hands.

Chi Chi Land, however, had to do with the State, brotherhood and communalism. Gupta says, “For over 200 years, puppeteers have used their art to comment on contemporary issues and this is an issue that needs to be addressed now, not later.”