Advertisement
Home / Culture / Oh please, give me a mouthful now

Oh please, give me a mouthful now

From Panchali’s kitchen, the singular pleasures of a snack so plural 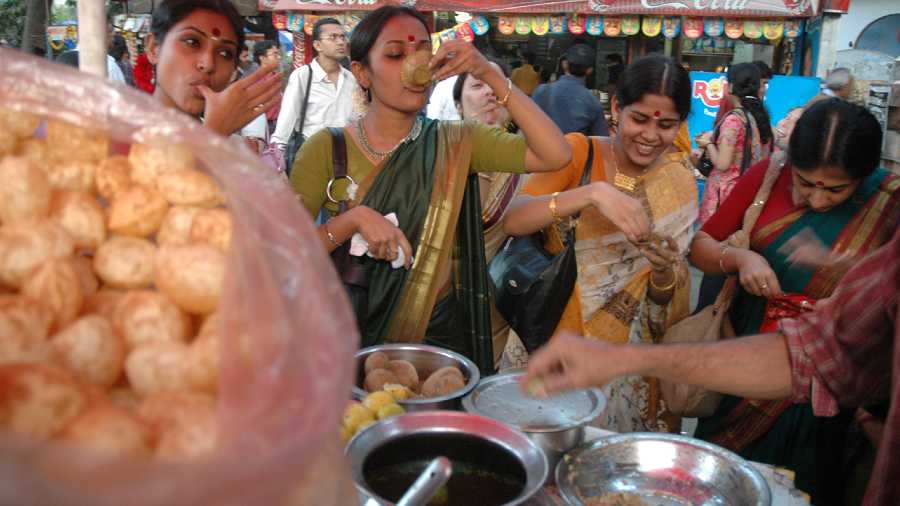 For the phuchka is your archetypal schizophrenic in the street food family, changing taste and form as you journey east, north and west.
Bishwarup Dutta
Uddalak Mukherjee   |   Published 25.07.21, 12:10 AM

Of late, I have been dreaming of Joguda. He visits me on nearly every solitary, sultry night.

That gifted interpreter of dreams may prick up his ears on hearing this confession, but I can assure the Father of Psychoanalysis that the Unconscious has nothing to do with these nightly visions. My Joguda Dreams have to do with a perfectly conscious craving.

For Joguda, Herr Freud, used to make the best phuchka in the Calcutta that I grew up in. And now, thanks to that speck of a virus, I have been forced to socially distance myself from my Soul Snack — those round, deep-fried puffs, filled with a dash of mashed potatoes, motor, chhola, and spiced up with a myriad masalas, to be gulped down with generous doses of tnetul jol, the tangy nectar of the gods. The do gaz ki doori between my beloved and me began this month last year. So this piece is my humble ode to a rather (un)happy anniversary.

Little wonder then that Joguda is haunting me in my dreams.

A wiry man with a handlebar, Joguda — he hailed from Purnea in Bihar — would perpetually be dressed in a fraying, fading, half-sleeved kurta and an equally unremarkable dhoti. As in real life, a life that now unfolds as memory, he is busy during these nocturnal visitations — expertly chopping chillies, sprinkling masalas on that yummy mound of starch, stirring the tamarind water kept in an earthen pot with a clean brass spoon. And then, his snake-like hands would slip into the wicker basket-cum-treasure trove covered with a red cloth and fish out a phuchka. He would use his thumb to gently break the top of the snack, add that mix of aloo, motor, dhonepata and whatnot in it, dip it into that ocean of liquid tamarind and drop it expertly into my eager, shaalpata-bearing hands.

I have no idea why I wake up before I manage to pop that blessed pill into my mouth. Freud, unfortunately, did not write about interpreting dreams that featured the phuchka.

That could be because the fiery phuchka has enough masala power to set fire to the Teutonic constitution. But it is also possible that Freud would have been addicted to the phuchka for a different — cerebral — reason. For the phuchka is your archetypal schizophrenic in the street food family, changing taste and form as you journey east, north and west.

Take a ride on the Kanchenjunga Express and Bengal’s and Bihar’s phuchka, you would notice, drops the “ch”, transforming into the phuska in Assam. Take another train and trundle through the east and then the Indian heartland and you will see phuchka at its schizophrenic best: gup chup in Odisha; fulki in Madhya Pradesh; pani ke batashe in Uttar Pradesh; golgappa in Delhi; pani patashi in neighbouring Haryana; pakodi in Gujarat and, finally — phew — paanipuri in Maharashtra. With each change in its form, the humble phuchka embodies the dizzying diversity of India’s culinary and cultural landscape.

New India, though, has unleashed newer varieties that can shock and awe the sensibilities of those who want Old India to return. Surfing through one menu on a popular food-delivery app, I was astounded to discover the following new-age phuchka avatars: “Corn Cheese Phuchka”; “Mushroom Corn Cheese Phuchka” and — hold your breath! — “Paneer Tikka Phuchka”.

As always, a thin line separates dreams from nightmares.

Apparently, the original phuchka, as has always been the case in the history of human civilisation, began with a woman with magical hands. Legend has it that one day, as the five famished Pandava brothers were enduring yet another day in exile, their mother, Kunti, asked Draupadi to cook up something with the meagre resources at her disposal and that ingenious woman responded by inventing the phuchka. An impressed mother-in-law blessed it with immortality.

Incidentally, in a curious intersection between myth and history, the mythical Panchala, the place of Draupadi’s birth, is believed to be located in northern India, which, food historians agree, is where the paanipuri originated.

Every Indian has his or her favourite phuchka story, and I am no exception. Years ago, on my way back after covering a hunger death in Jharkhand, I spotted a solitary man setting up a wicker basket covered in a red cloth under a giant, shady tree in a village square. Children were gathering around him with expectant faces while a cow watched the excited group with faint interest. We sped by that spectral figure who stood silhouetted in the failing crimson evening light. I couldn’t quite spot his face.

But I like to believe that the man had a wiry frame, a handlebar, and thin, quick hands with which he prepares, to this day, Draupadi’s immortal snack.