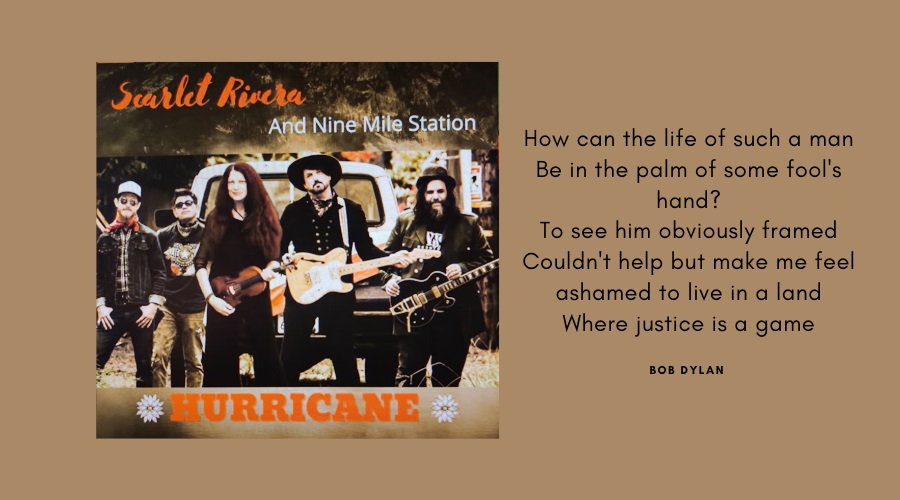 This new version, with Scarlet and her violin collaborating with Will Hawkins and Fernando Perdomo of Nine Mile Station, is at once reverential to the original yet unbounded in its musical prowess and outreach.
The Telegraph Online
Shantanu Datta   |   Published 05.06.21, 05:29 PM

Today, she plays some of the exact same notes she played 45 years ago while performing alongside Bob Dylan on Hurricane, the first song of his 1975 album Desire. Yet, Scarlet Rivera manages to somehow surpass the electrifying energy of the past while accompanying Los Angeles band Nine Mile Station for an igniting rerun of the track to commemorate 80 years of the singer-songwriter.

She calls it a “powerful” and “stunning” version, but the 2021 take of this song about racial injustice has turned out even better than that. “I have performed Hurricane many times live but have never recorded it with anyone else since the Original with Bob Dylan, till now,” she says in a Facebook post tagged to a preview of the track.

The song as we all know is about Rubin “Hurricane” Carter, a champion boxer in prison convicted of a 1966 triple murder in New Jersey. He proclaimed his innocence, but his subsequent conviction seemed to be racially motivated, based as it was on “false evidence”. But Rubin’s conviction was finally overturned in 1998 after he had been found guilty once again in a second trial in 1976.

This new version, with Scarlet and her violin collaborating with Will Hawkins and Fernando Perdomo of Nine Mile Station, is at once reverential to the original yet unbounded in its musical prowess and outreach. As if surmounting the insurmountable, the band flies above clouds that are too high in the sky for us to even see.

“This electric intensity she summons with an acoustic violin merges ancient strains of klezmer and gypsy street music, forever wedding darkness and light, the deep sorrow of the ages against the new promise of joy in every sunrise and birdsong,” writes Paul Zollo in American Songwriter.

Couldn’t agree more. The evidence of that rare magic is in the playing and singing; the tantalisingly brief guitar-violin interplay towards the end _ brilliant _ and the manner in which Hawkins’s ragged but free-flowing vocals add emphatic texture to the lyrics ensures that every word pierces the heart and mind. All over again.

I am reminded of what Scarlet told me months ago on her recording experience with Dylan, particularly about playing alongside, and over, his harmonica. “At one point I was playing his song, and he started to play harmonica, and I stopped playing. And he stopped the song and said, ‘I actually want you to play over my harmonica and see what happens’. I also found out later that many people have tried to play over his harmonica but that didn’t work. I guess, I am one of the few people that has successfully played while he’s playing at the same time,” she said.

This year is the first time ever Scarlet has recorded the song since the original with Dylan. “The story of Hurricane and its message of racial injustice and police corruption sadly continues to be as relevant today as it was in 1975. As always, art conveys truth and opens minds and hearts,” she notes. Yet another song of our times. Sing it. Sing it out loud.

The song was recorded during Covid lockdown with Scarlet and the members of Nine Mile Station had isolate during recording sessions. NMS are Will Hawkins: lead and backing vocals, Fernando Perdomo: lead guitar, keys; Brendan Vasquez: bass, Nick Moran: drums

Songs of our time