On World Music Day, a selection of songs to keep you feeling good

The TelegraphOnline invites musicians from across the country to perform some of their favourites. Listen in 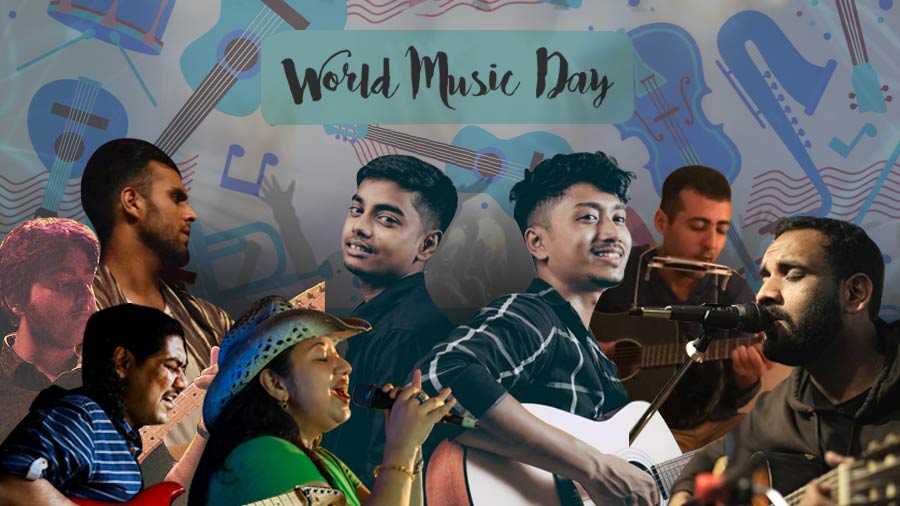 Like every year, World Music Day is being celebrated across the globe today (June 21), the idea being to encourage musicians to sing their songs. Music Day originated in France, where it is called “Fete de la Musique” or ‘Music Festival'.

We at The TelegraphOnline invited young musicians from across the country to celebrate the day with our readers. Many have sent in performance videos which we started showcasing since last week.

Here is a selection of songs that is bound to spread joy, hope and make you feel good and ensure you stay on the sunny side of the street.

(The TelegraphOnline would like to thank all the musicians who so willingly shared their music with us. We would also like to pay our gratitude to Babi Mitra, music evangelist and curator of the ever popular FB page India Rocks, for helping us reach out to the performers.)

‘Feelin’ Good’ was written by Anthony Newley and Leslie Bricusse for the musical, ‘The Roar of the Greasepaint- The Smell of the Crowd’.  In 1965, Nina Simone recorded it for her album ‘I Put a Spell on You’. “In the last two years, I have learnt to count my blessings. Every single one of them. Each morning has started with a conscious decision to seize the day, whatever it may bring, and give it the very best of me.  Every morning I am given a chance to appreciate all that is right and good and beautiful about my life, and make music. This song is an affirmation of that exact feeling,” says Sucheta.

An original composition, ‘Bucket of Pain’ is a song in Jaimin’s debut album, ‘Cutting Loose’, that is being unveiled _ tantalisingly, one song at a time_ in August. Here, he is doing an acoustic version of the song. “It’s a song about how fickle chance is, and how writing has salvaged me in times of despair. Happy summer solstice,” says Jaimin.

“‘Yesterday’ by The Beatles is a song I grew up with,” says Subharaj. “Recently, a student of mine wanted to work on this timeless classic. While teaching him the melody, I ended up writing a solo guitar arrangement for it. Then my good friend Jaimin suggested I play this version for World Music Day. So, I thought to myself, ‘why not?’”

"I can't seem to remember exactly when I wrote 'Metro-r Gaan'," says Bhibhubrata. "It must have been three-four years ago when I wrote it. I had boarded the Metro at Rabindra Sadan with a friend. On the train, I noticed a fellow passenger, a woman in a blue and white saree. I sensed apathy in her look and decided to pen a poem. I wrote it during the commute. Later that night, I added a melody to the poem. That's how the song was born."

R. Gore: Roses in My Hand

This song, an original composition, is, in its most basic form, a story of a boy pledging his undying love only to be left with roses in his hands. “I will be the better man and admit that this song has proved to be autobiographical from time to time,” says R, who is in Delhi. “Despite the dispiritedness that the words may bring on, it is one of my favorite songs to play live. And that makes music such a therapeutic thing to me, in the way it alleviates the most dreadful things about the human experience by means of words attached to a melody. On World Music Day, I urge everyone to pause, reflect and appreciate all forms of music out there, i.e. whistling of the wind, tweeting of the birds, the rustling of the leaves, or whatever there is to swoon, jam or hum to.”

Nsmusicgram, the band, is from Agartala, comprising Nilanjan De and Samuel Debbarma, the duo often sharing writing and composing duties. This is their fourth original with lyrics penned by Nilanjan. The music has been arranged by Samuel. ‘Waade’ also features Harshadeep Debbarma on drums and Rhythm Debbarma on vocals.

“The song is about unrealised aspirations, of dreams waiting to be fulfilled. These thoughts are then left alone in a world of thoughts,” says Samuel. “I composed the melody of the song in 2020, but had no idea of the lyrics. Ultimately, Nilanjan wrote the lyrics to fit the melody. Then I arranged the music and now it’s ready.”

Amithav Gautam: On the Sunny Side of the Street

“This song was written in 1930 by Jimmy Mchugh and Dorothy Fields. Written at the height of the Great Depression, it was meant to be a message of hope. It is one of my favourite jazz standards. Its bright melody always brings a smile to my face. This song has a timeless quality to it. It continues to be relevant to this day in our troubled times,” says Amithav, who is from Chennai.

Thelonius Monk is considered one of the most significant pioneers of modern jazz because of his unique signature playing style (improvisational, playful, percussive), skillful technique."We wanted to recreate this tune with a blend of Gypsy into it. It gives it a different vibe to this beautiful tune," says Soham.