Advertisement
Home / Culture / Music / From Around the World: ‘Jokerman’ in Rajasthani

From Around the World: ‘Jokerman’ in Rajasthani

A Bob Dylan tribute like no other, the album by producer Alain Weber features musicians from across the globe; our very own Purna Das Baul and Gazi Khan are in it 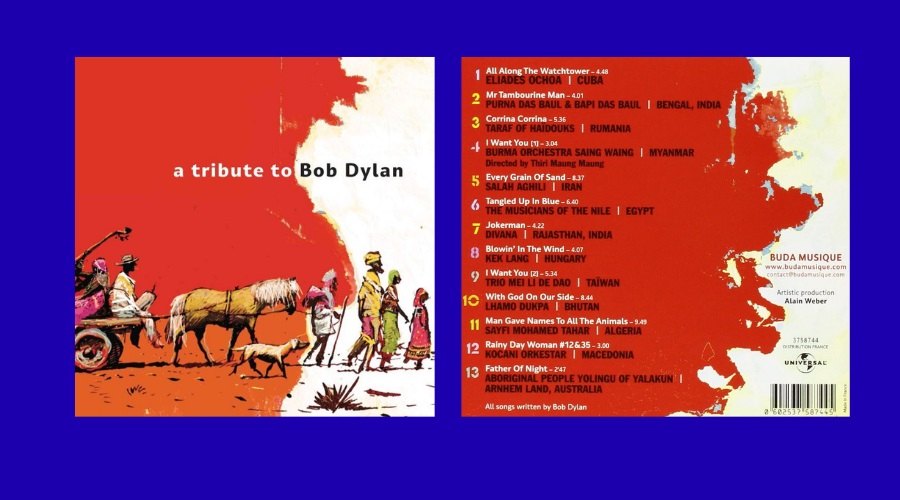 Perhaps one of the boldest tribute albums of all times is the one curated by French producer Alain Weber in which he has musicians from across the globe sing their own versions of Bob Dylan songs. Released by Buda Musique sometime in early 2014, From Around the World has a few of our own.

Purna Das Baul, who as we all know played with Dylan for the John Wesley Harding album of 1968 and is also featured on its cover, teams up with his son to take a shot at Tambourine Man, as does Gazi Khan Barna of Rajasthan who performs a version of Jokerman with Anwar Khan Manganiyar that, save the title, is all new!

There is a reworking of All Along the Watchtower by Eliades Ochoa, the guitar wiz from Bueno Vista Social Club who makes a Cuban standard out of it, and many other musicians who innovate audaciously _ make a Romanian lament out of Corrina Corrina, infuse Sufi lyrics to Every Grain of Sand and put out a wailing Tangled up in Blue.

The central idea of the project was that Dylan’s work reached well beyond America, explains Weber. “I wanted people who were like Dylan. People with the same spirit, poets in their own culture,” he told American Songwriter. “Some knew his music, others didn’t. We translated lyrics. It was vital they could identify with the words, to feel the image and meanings.”

Filmmaker singer-songwriter Jaimin Rajani has his own story how he and friend cinematographer/editor Vineet Arora _ the duo behind “If Not For You”, a documentary that celebrates Calcutta’s emotional connect with Bob Dylan _ discovered the album accidentally and then reached out to Alain and Gazi Khan and made a short film in which the international star of the Rajasthani folk world narrates his experience of performing a Dylan song in his native tongue.

“The artists have made these songs their own by reinventing them for their native style,” says Jaimin in a conversation with The TelegraphOnline. Excerpts

How did you hear about Gazi Khan?

While listening to Purna Das Baul’s Mr Tambourine Man in Alain's Dylan tribute album soon after its release, I spotted Divana, credited against the song Jokerman. Divana sounded Indian but I had never heard of the name before. So out of curiosity, that's the next song I played and was amazed to hear a beautiful Rajasthani rendition of my favourite song from Infidels.

What gave you the idea to make a film on him?

Initially, I was under the impression that Divana was the stage name of one man. For a year I searched for Divana's real identity with no luck. Then in 2018, during a visit to Jaipur, I made acquaintance with volunteers of Rajasthan Studio and Jaipur Virasat Foundation, two initiatives that aim to promote Rajasthani folk music. Someone from the foundation was kind enough to put me in touch with Gazi Khan and that's when I learnt Divana was the name of his entourage. Khan then introduced me to Alain, who I bonded with over our mutual admiration for Dylan.

When did you manage to shoot the short?

Earlier this year, Gazi Khan happened to be in Calcutta for a concert and invited me over to the guest house he was putting up in. That's when I recorded him.

Jaimin and Vineet’s short film on Gazi Khan Barna and his association with the Dylan tribute album, From Around the World, featuring Anwar Khan Manganiyar and Alain Weber.

Gazi Khan would have fitted well in ‘If Not For You’, your documentary on Dylan.

Yes, that was indeed the initial plan. However, that never worked out because we had very little time on our hands. While Vineet and I were working in Calcutta, Gazi Khan was touring with his group across Rajasthan, and our schedules didn't permit us to travel. While Calcutta's and Shillong's affinity for Dylan is widely known, the Rajasthan connection would have added a unique flavour to the documentary and perhaps been a revelation for many.

The song, Jokerman, is not recognizable except when they sing his name. Why do you think it works?

That's what makes the album so interesting and creative. The artists have made these songs their own by reinventing them in their native style. They aren’t mere covers. Each interpretation is unique and original. In fact, this is what even Dylan is doing with his own songs - changing their melodies and tempo in order to suit his present vocal texture and limitations, not making it sound anything like the studio versions we're familiar with.

Yes, Anwar has an amazing voice, natural and limitless. In fact, I would like to share with you a performance of the song, Jokerman, recorded by him and his troupe.