Here are a few of our favourites 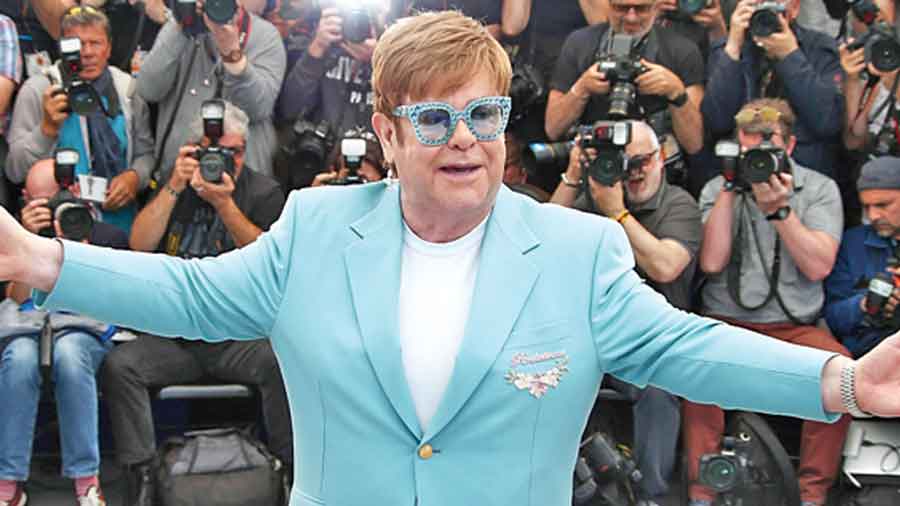 Elton John lyrics are hard to “decipher” and Tiny Dancer spawned an unforgettable Friends moment in 1996 during the episode The One with the Princess Leia Fantasy. The characters of Phoebe (Lisa Kudrow), Ross (David Schwimmer) and Rachel (Jennifer Aniston) are seated around the kitchen table in Monica’s (Courteney Cox) apartment. Rachel said Barbra Streisand’s The Way We Were was the most romantic song ever. Phoebe disagreed and said it was “that one that Elton John wrote for that guy on Who’s the Boss”. She went on to incorrectly quote the lyrics of Tiny Dancer as Hold me close young Tony Danza.

Misheard: ’Scuse me while I kiss this guy

Correct: ’Scuse me, while I kiss the sky

This is a popular track on Spotify and the 1967 classic features a chorus break where the guitar god sings: ’Scuse me, while I kiss the sky. But many heard this as ’Scuse me while I kiss this guy. Hendrix was aware of this and even jokingly sang the song with the incorrect lyrics at a live concert, and followed it up with a big smile.

Misheard: I’m gonna take my horse to the hotel room

Soon after Lil Nas X went to the top of Billboard’s Hot Country chart, the company removed the track because it thought there were no country “elements” in it. Anyway, country legend Billy Ray Cyrus came to rescue and collaborated on the track with the young artiste. And it was a big, big hit. But somehow, everyone hears the line Take my horse to the old town road as Take my horse to a hotel room.

Misheard: Got a lot of Starbucks lovers / they’ll tell you I’m insane

Correct: Got a long list of ex-lovers / they’ll tell you I’m insane

Apparently, a huge section of listeners heard the “Starbucks” bit and even Taylor Swift’s mother, something Swift had acknowledged in a tweet: “Hahah it really does sound like Starbucks Lovers…. My mom just now who is supposed to be on my side. Smh.” Starbucks responded: “Wait, it’s not?”

Good for You by Selena Gomez

BBC Radio 1’s Scott Mills went to the point of asking the singer to clarify the lyrics. “A lot of our listeners think the first line is: ‘I’m farting carrots’” The singer laughed and replied: “Well, wouldn’t that just start the tone really sexy? And like that’s what you wanna hear a girl say! It’s also because you guys have the accent, so it does kind of sound like that, for sure.”

Livin’ On A Prayer by Bon Jovi

Correct: Woah, we’re halfway there / Woah-oh, livin’ on a prayer

Perhaps a creation of Bon Jovi haters, Squidward is a popular character from the show SpongeBob SquarePants, which aired in 1999. Bon Jovi’s song was released in 1986. So, no, this song cannot be a tribute to the animated character. Some even said the line Livin’ on a prayer sounds like “Lizard on a chair” and “Lemon and a pear”.

Empire State of Mind by Jay Z and Alicia Keys

Correct: In New York, concrete jungle where dreams are made

We are really unsure about how the line can be confused to read “Concrete jungle, wet dream, tomato” but we are not alone. Musician Ed Sheeran apparently said in 2018 that even he was one of many who misheard this line.

Misheard: I’ve got shoes, they’re made of plywood

The song comes towards the end of the musical film, Grease and some are not singing along to the correct lyrics: I’ve got shoes, they’re made of plywood instead of I’ve got chills, they’re multiplying.

According to NPR, a British poll revealed that this particular line from Dancing Queen was the most-commonly misheard lyric in 2014.

We Built This City by Starship

Misheard: We built this city on sausage rolls

Correct: We built this city on rock and roll

The misheard lyrics are so popular that it has inspired a parody song from YouTuber LadBaby (Mark Hoyle) and it ranked on the UK singles charts during the 2018 holiday season for his cover about pork-stuffed pastries.

Don’t tell me you haven’t got this wrong?! In 1995, TLC won the MTV Video Music Award for Video of the Year for their popular track, Waterfalls. However, that hasn’t stopped “Jason Waterfalls” from making it to the Urban Dictionary.

Misheard: Here we are now in containers

Correct: Here we are now, entertain us

The grunge anthem has the line Here we are now, entertain us, which was a catchphrase of Kurt Cobain. “That came from something I used to say every time I used to walk into a party to break the ice,” he had said. Of course, some listeners had to get something or the other wrong about a song with a title inspired by Teen Spirit Pit Stick deodorant.

We Will Rock You by Queen

Misheard: Kicking your cat all over the place

Correct: Kicking your can all over the place

Freddie Mercury loved cats and filled up all the rooms in his palatial house with his furry friends. So, no he didn’t mean to disrespect cats at all… some listeners did!

The Beatles.
The Telegraph

I Want to Hold Your Hand by The Beatles

Misheard: I want to hold your ham

Correct: I want to hold your hand

Let Bob Dylan have some fun. A music industry story goes that even Bob Dylan misunderstood a line in the song and thought “I can’t hide” was “I get high.” Anyway, the group definitely didn’t sing about marijuana and we don’t how anybody could mistake “hand” for “ham”.

Misheard: Like a virgin, touched for the 31st time

Correct: Live a virgin, touched for the very first time

It’s a racy song with a racy misheard bit. We don’t know what Madonna thinks about the misheard lyrics but it has become a part of “misheard folklore”.

We Didn’t Start the Fire by Billy Joel

Misheard: We didn’t start the fire, it was always burning, said the worst attorney

Correct: We didn’t start the fire, it was always burning, since the world’s been turning

One of Billy Joel’s big hits but the singer didn’t always enjoying siging it and at times he had trouble remembering all the lyrics. We are still waiting for him to sing the misheard line on stage!

Sweet Dreams (Are Made of This) by The Eurythmics

Misheard: I travel the world in generic jeans

Correct: I travel the world and the seven seas

In the 2013 film I Give It A Year there is a joke about the misheard bit with Rafe Spall’s character Josh says, “Do you think Annie Lennox is singing about whether she happened to travel the world in Levi’s or Wranglers?”

Losing My Religion by R.E.M.

This is good fun and according to KissThisGuy, it is better than the original lyrics. In case you want to get a list of “misheard lyrics”, this is the website to visit.

O Fortuna is a part of Carmina Burana by Carl Orff

Misheard: I love goat cheese. Bring me cookies. They give you Gonorrhea.

In 1935–36, O Fortuna was set to music by German composer Carl Orff as a part of Fortuna Imperatrix Mundi and first staged by the Frankfurt Opera in 1937. Last year, a parody of the song appeared and it has ensured that we don’t listen to O Fortuna the same way again.