Bergamo, near Milan is an ancient town perched on the edge of the Alps with beautiful domes, campaniles, palaces and towers, says Arundhati Basu 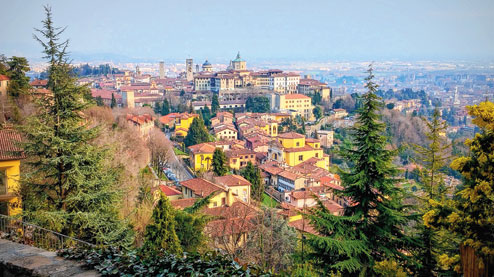 It’s a medieval walled city just a stone’s throw from Milan, in Italy’s luscious Lombardy region. But Bergamo’s often overlooked in the rush to discover northern Italy’s other gems. Bergamo’s perched at the edge of the Alps, from where it looks down upon vales and mountains and it’s an idyllic place to while away time.

My visit to Bergamo was by chance. I had landed at the airport near the city and taken the bus to Milan. It wound through the beautifully lit-up city at night and left me wanting to see more. So, on a fine spring morning, a swift train ride from Milan took me back to Bergamo.

I found myself in a two-tiered city, the name of which was derived from the word ‘berg-heim’ meaning hill town. Julius Caesar’s said to have granted it the status of Municipium (Latin for town or city) in 49BC and Bergamo was home to Roman military forces for a considerable period.

But Bergamo’s Roman town plan was overridden by the Venetians when they made it a part of the Venetian State in 1428. For over three centuries, Bergamo was a part of the Serenissima (Most Serene) Republic of Venice. The Venetians left behind a legacy that till today gives Bergamo an ancient feel. They constructed the Cinta Muraria di Bergamo — megalithic walls — in the 16th century to defend the city, yet the walls were never used for military purposes.

A easy funicular ride links the lower and upper parts of Bergamo during summer. But I had arrived at the fag end of winter and I had to make my way to Città Alta (that means Upper City and ‘città’ is pronounced as cheetah with an emphasis on the ‘t’) on foot along the winding Viale Vittorio Emanuele II. The king was a familiar figure to me. I had spotted his moustachioed figure of all over northern Italy — he was the first king of a united Italy since the sixth century.

While still in Città Bassa (Lower City), I passed the Porta Nuova (New Gate). If it had been the old days and I had been carrying goods, there would have been a tax to pay before the city’s iron gates would have opened up for me.

Ahead of me lay a charming tableau from a postcard — a hill crowned by domes, campaniles, palaces and towers. In the early 20th century, an architect had intentionally kept the height of the buildings in Città Bassa low. The Città Alta had to stand tall proudly above.

Walking along the Venetian walls, I entered Città Alta through one of its four Venetian gates, the Porta di Sant’Agostino. From atop it, a winged lion known as the Lion of St Mark and carved in sandstone, proclaimed that the Venetians had been here. The road unfolded a town below nestling in a valley networked with sloping velvet greens, orchards and a gaggle of villas. In the backdrop were the Bergamasque Alps or the Orobian Alps which are part of the Central Eastern Alps.

In the heart of medieval Bergamo, I got conned by my rumbling stomach into an expensive lunch of soup at a café. Thereafter, all kinds of delectable, baked goodies and polenta sweets mocked at me from bakery windows. I was rueing my rushed lunch when I found myself in the Piazza Mercato delle Scarpe (Shoe Market Square), an old square that was supposed to be the city’s market during Roman times. Through it ran Via Gombito, the main road in the centre of the upper city.

A tall tower, that you can climb in a matter of 180 steps — the 12th-13th century Torre del Gombito/Gombito Tower — stood by Via Gombito. During the medieval ages such towers implied power. But the Torre del Gombito is not the only spot where you can get a bird’s eye view of the city. The Torre Civica (Civic Tower) and a castle too promise spectaculars views.

I wasn’t feeling particularly well (if I had been in my element, I would have climbed all three), but I managed to drag myself up the steep ascent to the castle. The Funicolare San Vigilio takes you to straight to the Castello di San
Vigilio, but it was not in operation. Yet when I stood atop the ruins of the castle — the views of the vineyards, villas clinging to the hills, a golden statue on a grey dome down in Città Alta glinting in the evening rays of the sun — it drove away all other cares from my mind.

Now, the nerve centre of Bergamo is Piazza Vecchia. In pre-Venetian days, the piazza used to host a grain and
fodder market but the Venetians brought down the medieval structures and supplanted them with their own architectural vision.

Piazzas always overwhelm me, in terms of the fact that I never can decide which building should receive the first sigh of appreciation. The Piazza Vecchia is, however, dominated by the Torre Civica which snags the onlooker’s attention by the virtue of its campanile — the enchanting Italian word for bell tower.

At the centre of the square stood a fountain donated to the city by a podestà (senior officials in Italian cities from the late Middle Ages onwards) in 1780. Next to the campanile was the 12th century Palazzo della Ragione, the city’s seat of administration in times past. On the palazzo’s façade, I met our old winged friend, the Lion of St Mark, all over again, but this was only a 20th century replica of the original 15th century carving which was destroyed when Napoleon invaded the city.

Directly opposite stood the white porticos of the Palazzo Nuovo/Biblioteca Angelo Mai, which was a town hall in earlier times and a library since the 1870s. And northwest of the square was an impressive frescoed building, the Palazzo del Podestà, home traditionally to the Venetian Podestà.

But my vote went to a chapel, the red and white Italian marble façade of which seemed to have almost a woven texture. To my fascinated eyes, the Cappella Colleoni (Colleoni Chapel) deserved to be deemed a masterwork of Renaissance architecture. It has the tombs of the condottiere Bartolomeo Colleoni, captain-general of the Republic of Venice in the 1400s, and his daughter Medea. I decided I’d forgive Colleoni for bringing down the sacristy that had stood at the spot where he built his mausoleum.

I was enchanted by the network of Bergamo’s narrow alleys flanked by houses with slatted windows, at the end of which always stood out the dome of the Basilica Santa Maria Maggiore. After my wanderings in Città Alta, I climbed higher above Bergamo to a village with a cluster of beautiful old villas and a church at the end of the road.

A day of exploring the ancient walled town demanded a rich chocolate pastry and tea, after which I made my way back to lower Bergamo, past the old Roman aqueduct, the area around which has many caves, secret passages and underground cisterns. A bit of mystery and romance was added to it all when I heard locals speak of the possibility of stashes of the Venetians’ treasure buried somewhere in the caves. Perhaps I should have stuck around to play sleuth and find the hidden riches.

♦ How to get there: Milan is a one-stop flight away from Calcutta on Qatar Airways, Etihad Airways, Air India and Emirates. From Milan airport, Terravision, a shuttle service, goes to the heart of Bergamo.

♦ Where to stay: The Gombit Hotel (gombithotel.it/en) next to the Torre del Gombito is a boutique hotel with an old soul but modern facilities.

♦ What to do: Visit the caves near the Roman aqueduct with walking tour companies like Nottole (nottole.it).