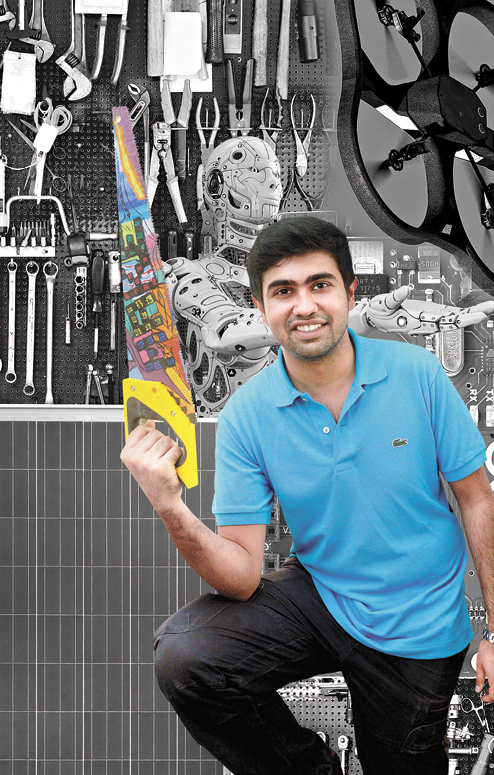 For engineer-turned-do-it-yourself honcho, Vaibhav Chhabra, it all started the day when the ceiling literally fell in and buried the Mumbai office of his company, EyeNetra. Chhabra, 27, took a radical and unusual decision: instead of buying new furniture for the office, he decided he would build it himself — with a bit of help.

So, Chhabra, who had just moved from Boston to head the eye diagnostics firm’s engineering team in Mumbai, quickly gathered “six random people” through a Facebook meet-up, and they began making tables and chairs over weekends. In no time at all, Chhabra and his band of hobbyists had moved on to making all kinds of other things including Minions and LED light cubes.

Before he knew it, Chhabra had gathered a growing community of makers — or tinkerers, designers and serious inventors — and moved to a tiny garage to launch Maker’s Asylum, Mumbai’s first ever maker space. “People have lots of ideas but nobody is ready to support them,” says Chhabra.

Now, three years — and three address changes — later, Maker’s Asylum’s buzzing 7,000sqft space in Mumbai’s Marol industrial zone is at the vanguard of the emerging maker movement in India that’s trying to get Indians to get their hands dirty and make and learn and innovate things. Indeed, everywhere you cast an eye — from Kochi to Bangalore to Ahmedabad to Calcutta and even rural India — maker spaces are springing up as the newest hubs of creativity and innovation.

These maker spaces are equipped with all kinds of fabrication equipment from 3D printers and laser cutters to carpentry tools. And they’re drawing everyone from artists creating movie props to hobbyists making furniture and youngsters building everything from satellite ground stations to drones and robots.

Globally, the maker movement is huge with maker spaces being regar-ded as the future of manufacturing and with proliferating show-and-tell Maker Faires drawing hordes of makers. It covers just about everyone from computer hackers to traditional artisans, from designers and inventors to do-it-yourself (DIY) tinkerers. And now it’s making its way to India.
Cut to Bangalore’s Halasuru Metro Station, where art historian Anupama Gowda and design consultant Pavan Kumar are incubating a whole new world of makers at Workbench Projects. They too began in a garage in March 2014 before moving last year to the sprawling 5,000sqft space that’s attracting home-schoolers making solar chargers for cellphones, gardeners growing herbs, serious inventors et al. It’s part-maker space, part-digital fabrication lab (fablab), and a co-working space too.

“Maker spaces breed innovation and allow different stakeholders, be it an artist or engineer, to give and take in a community effort. We felt there was no space that allowed these things in Bangalore,” says Pavan. The two knew first-hand the difficulty of building things when they made an educational product, Numbers Nagar, earlier. Now, they’ve invested Rs 1 crore in Workbench Projects.

Or take a look at Meghna Bhutoria’s MakersLoft in Ballygunge, Calcutta, which opened in September. When Bhutoria quit her job in the US to come home to nurse her ailing mother last year, she hadn’t thought about what else she would do. But what began as an idea to make her own furniture turned into a 2,000sqft platform for an emerging maker community. “It’s the very first maker space in East India,” says Bhutoria, who’s working hard to spread the concept in Calcutta by wooing everyone from artists to students.

She adds: “The idea is for people to do things together. I feel innovation happens when people who have no reason to talk to each other, like an artist and a techie, come together and co-create.”

The maker movement’s still in its infancy in this country but it’s growing rapidly. In the last three years, nearly 20 maker spaces have opened across India. And they’re not confined to the cities. Abhijit Sinha, 24, took a giant leap in the dark when he quit his tech job in 2014 to open a maker space in Banjarapalya Village near Bangalore. It has emerged as an alternative school where the village children and adults first learnt computers on their own — and then started making all kinds of projects picked up off the Net like a robot made from toothbrushes. “We want to reach out to people that the usual maker movement is not reaching,” says Sinha.

Or, consider this. At the third Maker Fest in Ahmedabad’s CEPT University in January, 150 makers showed their creations to 30,000 visitors. One seven-year-old from Kerala, Saarang, showed his cleaning robot. A school team built wearable tech devices for the blind. Others showed hand-made jewellery.

Says Palo Alto-based venture capitalist Asha Jadeja, who brought the Maker Fest to India: “The idea of taking a maker fest to the developing world came because I live in Silicon Valley, where entrepreneurship and innovating in your garage, your bedroom and your dorm is the norm.”

She first funded a Maker Faire in Cairo, which was a hit. It motivated her to bring it to India. “I knew the hunger is there everywhere. People want to make things. The idea is to provide a platform to story-tell about local maker activity and celebrate the maker culture,” says Jadeja. Adds Kishan Parikh, head, operations, Maker Fest 2016: “The maker movement has got a real push with the fest.”

What’s more, through her Motwani Jadeja Family Foundation, she also tied up with MIT’s Fab Foundation, donating $150,000 to open an MIT FabLab at her alma mater, CEPT, in 2014. There are some 10 MIT FabLabs in India now, which are spurring the movement.

Vipul Arora, manager, FabLab CEPT, says: “It’s located in a college but it’s open to everyone and it’s completely free.” Adds Jadeja: “I want to put India on the global maker map. Once people have the tools, anything can come out of it.” So, she has funded a Grade 8 student in Ahmedabad to commercialise a drone.

Indeed, the maker spaces are a hub of creativity. They’re all about open-source learning and build groups of people with diverse skills, who make things together. They constantly host talks and tool-training workshops. And while there are membership fees, it’s more about supporting the culture. “The community is our strength,” says Chhabra.

Take a look at the Mumbai Asylum on a typical weekend. In one corner, an iPad cover designer is sharing tips on crowd-funding. In another, hobbyists are huddled around a laser cutter. Elsewhere, civil engineering student Sachin Maheshwari and techie Aaradhya Dureha are puzzling over a satellite ground-station they’re building. And software engineer Viren Vaz, whose carpentry workshops are a sell-out, is building a frame for a “magic mirror” he’s making with an electronics engineer. “I can do carpentry at home but here I’m surrounded by people who understand what it is to build — and that’s the fun of this space,” he says.

Chhabra says they get some 1,000 visitors a month and have had seven hardware start-ups. Meanwhile, freelance designer and content head of the Delhi Maker’s Asylum, Premankan Seal, is promoting collaborations between artists and engineers. “Magical things happen when you get various disciplines under one roof,” he says.

Indeed, each maker space is carving its own focus. At Workbench Projects, Pavan and Anupama’s thrust is on “responsive innovation”. “We’re saying that it’s great to be a maker and learn all these cool things, but after that are we going to solve problems that haunt us in our own backyard?” asks Anupama. For instance, they ran an Enable Makerthon with the Red Cross, where 17 teams created affordable devices for the disabled.

Curiosity Gym’s co-founders Girish Nair and Jehangir Khajotia too have a three-fold aim: to run a maker space, take maker spaces inside schools — they’ve already set up one in a leading Mumbai school — and mentor start-ups. “We believe the maker space is a vertical where we can catalyse thinking and design and help entrepreneurs to realise their dream,” says Khajotia.

Meanwhile, the Banjarapalya space’s Sinha is focused on alternative schools and solving rural problems. He is crowd-funding for four more rural maker spaces with his Project Defy or Design Education for Yourself in places like the Matancherry fishing village in Kochi. “We will spark the interest and let the local community take it forward,” he says.

So, are Indians turning into nifty makers? Promoters like Pavan and Anupama and Bhutoria feel that India has never had a DIY culture. “DIY has now become a niche cult thing,” says Anupama.

But others like Jadeja feel that India has always been a “maker country”. She says: “We’ve been always making things from crafts to the technical innovations in our rural areas. Only the storytelling was missing. I feel the maker movement will spark off local innovation across India.”

Adds Chhabra: “Jugaad is our biggest strength because it’s based on need.” He sees maker spaces bridging the gap between jugaad and product incubators.

For now, the maker movement is still small. But, be it as a hobby or an enterprise, the maker space evangelists are all eager to get Indians to join in the fun of making.