Advertisement
Home / Culture / Many splendoured is my provenance

Many splendoured is my provenance

Conceived on the back of a nawab’s victory, laid out with care by the British, lost lovers’ point now, a politician’s dreamscape and birthing ground of PK-Chuni’s football progeny, Maidan's story 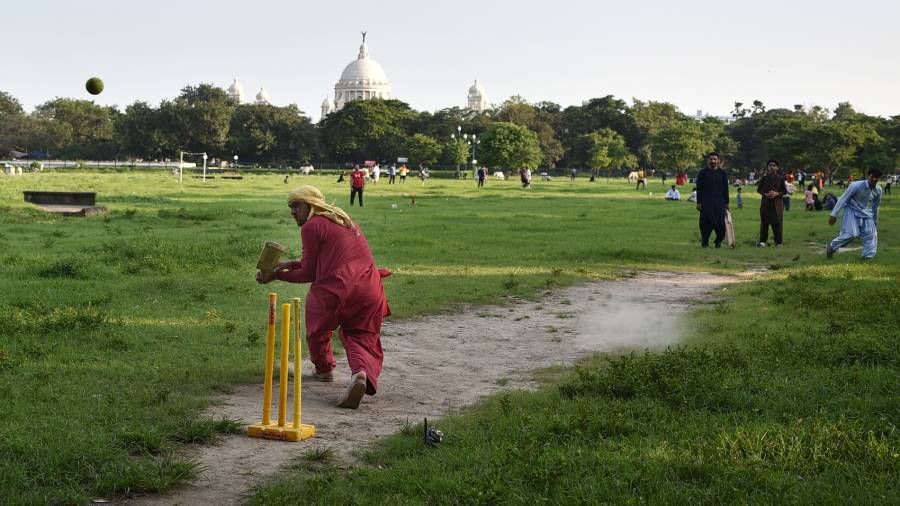 The construction of the fort and the clearing that was yours truly displaced hundreds of natives.
Biswanath Banik
Prasun Chaudhuri   |   Published 09.01.22, 12:11 AM

Only 260 years ago I was part of Gobindopur, a village interspersed with forested marshland by the Hooghly river . It was one of the three villages founded as Calcutta — the trading port of the East India Company — by a sahib called Job Charnock, in 1690. Gobindopur was the smallest — just 1,044 bighas, 13.5 cottahs — of the three, extending from Kolikata Khal (creek) in the north to Gobindopur Nullah (or Tolly Nullah) in the south. The creek originated from the salt lakes in the east and “debouched” into the Hooghly at present-day Prinsep Ghat, flowing through Beliaghata, Sealdah, Chandni Chowk and Hastings Street.

The jungle was thick and full of wild boars, jackals and tigers. Warren Hastings, then just an official (later governor general of the company), shot a tiger in the southeast corner where St. Paul’s Cathedral now stands. When Nawab Siraj ud-Daulah visited Calcutta, he set up a hunting lodge in the area where the Victoria Memorial Hall was later built; for some years the Presidency Jail was here. There were patches of arable land growing tobacco, paddy and cotton.

Some historians claim I owe my origin to Siraj ud-Daulah. After all, it was his attack on Calcutta that forced the East India Company to build a new and stronger fort on my precincts. The other Fort William, further north by the river, had been captured by him in 1756. After the company defeated the nawab and recaptured Calcutta, Lord Clive, the governor of Bengal Presidency, decided to demolish the old fort and build a new one, with an unobstructed field for firing. In August 1757, permission was issued to fell all trees for a clear field.

Clive commissioned Captain John Brohier as the chief engineer to build a strong fort capable of accommodating a garrison of 5,000. The estimated cost was Rs 19,11,569. Brohier started work towards the end of October 1757 but it got delayed. First, due to a dearth of labourers and erosion of the Hooghly. Then came the great famine of 1770. The fort was finally completed in 1773. The octagonal fort has five sides facing me and three facing the river, surrounded by a dry ditch that could be flooded by raising a sluice from the Hooghly. In the early days, there were drawbridges to cross the moat but they were abandoned later.

The fort and the clearing that was yours truly displaced hundreds of natives — weavers, fishermen, farmers, artisans, traders. The British claimed they had compensated with “money and grants of land”. The entire colony with their deity Gobinda Jiu and its historic shrine migrated to the north of Calcutta.

The sahibs loved my verdant greens that reminded them of Hyde Park back home in England. They planted trees, tended the grass, went for walks and spins in horse-drawn carriages. My open space started filling up with roads, monuments, gardens, parks, tanks, fountains and sports clubs.

In 1819, in the southeast corner came up the Calcutta Race Course, managed by the Royal Calcutta Turf Club. In 1835, Emily and Fanny Eden, sisters of Lord Auckland, the governor general, laid out gardens named after them at my northern end. Part of the garden later formed the Ranji cricket stadium, now famous as Eden Gardens. To my extreme south corner, in “a waste space”, the colossal St. Paul’s Cathedral was built and consecrated in 1847. Victoria Memorial, the most spectacular monument and park, was built between 1904 and 1935 in my southeast corner; and the jail was shifted to Alipore.

In the early 19th century, British administrators started decking me up with statues. These were statues of sovereign, viceroys, governor generals and distinguished colonial officials. Exquisitely carved by the best sculptors in Britain, these equestrian and pedestrian statues adorned my green acres. Then there were monuments — most prominently the Ochterlony Monument (later renamed Shahid Minar) — memorials and cenotaphs raised as tributes to commanders and soldiers who laid their lives to build the British Empire. After Independence, many of these were shifted out and in their place came up statues of Indian freedom fighters and dignitaries.

Post-1947, the Indian Army became my owner as the fort became their Eastern Command headquarters. After the 1950s, I turned into a football and cricket hub. Several clubs, tents and stadiums came up; every weekend thousands thronged. And when political parties chose me as their venue — especially the Brigade Parade Ground — hundreds of thousands flooded my lawns. There was a time when I hosted fairs. One such was the Calcutta Book Fair but, sometime in the late 1990s, there was a devastating fire and that was the end of it.

From being a humble local patch of green, my fame and name has spread far and wide. Now they call me the “Lungs of Calcutta”, I am compared with the central parks of New York, London, Paris and Moscow. In the just published book Fort William and Calcutta Maidan: The British Heritage of Calcutta, Dalia Ray and P.T. Nair have offered rich tributes to me. In one place old man Nair says, “To every Calcuttan, the lasting and best gift of the British is surely the Maidan.”