In praise of Frump

In times of lockdown, lines between public and private, formal and informal, seem to be blurring 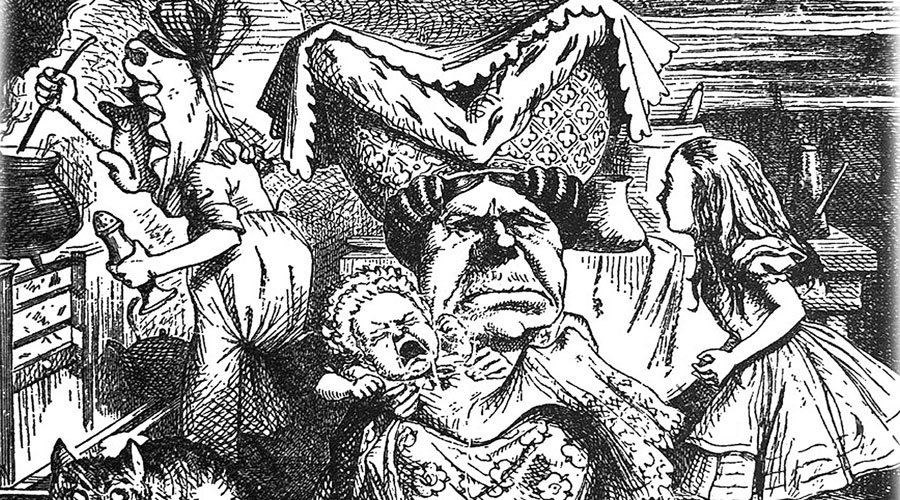 Imagine, if you can, the Duchess on Zoom. Yes, I do mean the Duchess from Alice’s Adventures in Wonderland. Imagine that she is both a duchess and a schoolteacher, taking an online class — say, on latitudes and longitudes. Like most men and women all over the world now, think of her as working from home, battling against not only pandemical gloom but also domestic chaos and unfamiliar technology.

Of course, if she were less duchess-like about the protocols of Zoom, she would have been sitting behind, rather than in front of, the kitchen table. She could have adjusted the table-top and her laptop camera to frame out the howling baby on her lap, the grinning cat at her feet, and the ill-tempered cook stirring that famously over-peppered cauldron of boiling soup. Only the upper half of her person, magnificently crowned, would then have been visible to her students. But the Duchess does not give a damn. And in her scowling, bewhiskered and supreme unconcern for appearances, she becomes, in the eyes of Lewis Carroll and his illustrator, the High Priestess — even a sorceress — of Frump.

The word, ‘frump’, evokes a type of person as well as a quality. The dictionary defines its modern usage as a “cross, old-fashioned, dowdily-dressed woman”, and hastens to add that it is rarely used for a man. Perhaps it’s time to salvage this word from the fog of 19th-century misogyny, and reclaim it for the vocabulary of our New Normal. It could even become a style once again — as it often used to be in the last century, in the lives of certain misfits and eccentrics of the West, compelled to make a virtue out of necessity.

While the physical gap between the home and the world widens with indefinite restrictions on gathering and mobility, the lines between public and private, formal and informal, seem to be blurring as well. We are having to get used to the levelling gaze of the little green eye in our personal devices, at once intimate and inhuman. The importance of the difference between Inside and Outside is giving way to the gentler tyranny of that between Above and Below. Our bodies are getting sliced, satyr-like, through the middle by table-tops and camera-frames. Above, we don white-collar smart or art-world chic; below, we wear the bottoms of our pajamas rolled.

Bodies and clothes — what we are, and how we wish to be seen — come together in the history of the word, ‘frump’, which goes back to the messier and plague-ridden Middle Ages through the verb, ‘frumple’: to wrinkle, crumple, ruffle, and disorder. The way of all flesh mingles here with the sense of a certain style of self-presentation, an indifference to personal appearance, popularly associated with the otherworldliness, natural or affected, of a life of the intellect. The absent-minded professor’s untidy clumsiness, or the blue-stocking’s disdain for fashion, often perceived as self-regard in disguise. Yet, the frumpiness of either is seen to have enabled him or her to break loose from the constraints of polite society toward a freeness of body and spirit that is enviably comfortable, even as it risks parody.

Alice, of course, found the Duchess rude, mad and “very ugly”. In 1869, a few years before Alice was written, the American writer, Henry James, then in his twenties, went to meet the fifty-year-old Mary Ann Evans, better known by her pen-name, George Eliot. He found “this great horse-faced blue-stocking” to be “magnificently ugly — deliciously hideous.” But this was only to begin with. “In this vast ugliness,” James wrote to his father, “resides a most powerful beauty which, in a few minutes, steals forth and charms the mind, so that you end up as I ended, in falling in love with her.”