It’s a Corner, for Palestine 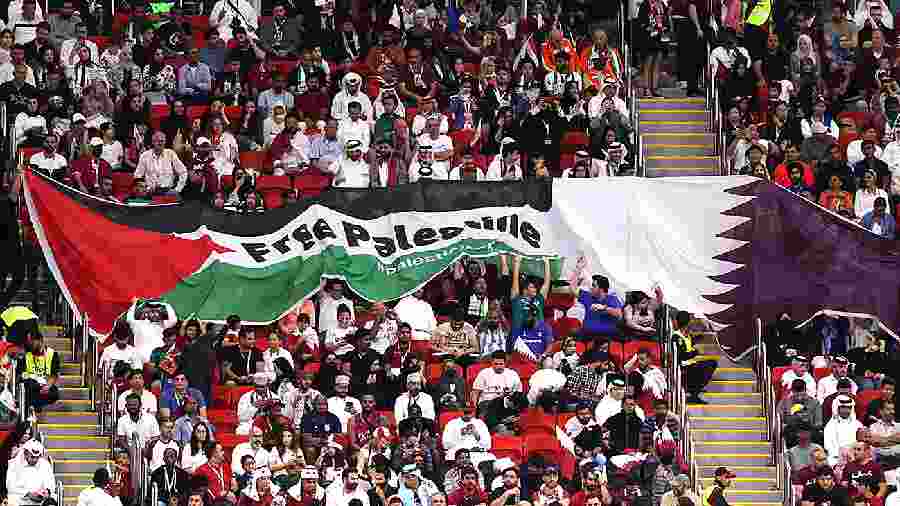 GAME POINT: Spectators hold up a ‘Free Palestine’ banner during a match in Qatar.
Photo by Catherine Ivill/Getty Images
Angshuman Roy   |   Published 15.01.23, 03:08 AM

Argentina had just beaten the Netherlands in the World Cup quarterfinals. The Lusail Stadium in Doha, draped in blue and white — Argentina colours — reverberated with the iconic song Muchachos. In the midst of it all, two men were shouting for a different reason. They were saying, “Palestine, spare a thought for Palestine.” In their hands was the Palestinian flag.

Turned out, Ahmed and Shaf were from London. Ahmed told The Telegraph, “There is no one to speak for the Palestinian cause. Look at the support Ukraine got. But why this double standard when it comes to what Israel is doing with the Palestinian people? The Western media conveniently turns a blind eye. We thought the World Cup will be the best platform to drive home our point.” Shaf nodded in agreement.

They were not the only ones who felt so strongly about this issue. From the start of the World Cup in Qatar, Palestine was the buzzword among the Arabs even though the Western media continued to lead with “migrant workers”. Messi and Argentina may have won the Cup but outside it was the Israel-Palestine issue that held sway. Palestine found its voice in hundreds of Moroccans, Tunisians and Lebanese.

When a football fan wearing a Tunisia shirt invaded the Education City Stadium pitch with a Palestinian flag during the group-stage match against France, he was apprehended by security personnel but the spectators in the stands chanted, “Palestine! Palestine!”

All of this must be understood in the context of the broader ArabIsraeli conflict, the more specific Israeli-Palestinian conflict and the support of the Arab league for the Palestinians. Morocco, Tunisia and Lebanon are primarily Arab countries.

“Palestine is very close to the heart of the ordinary Arab,” says Anirban Bandyopadhyay, who teaches history at the Kalinga Institute of Social Sciences in Bhubaneswar. Muddassir Quamar, an associate fellow at the Manohar Parrikar Institute for Defence Studies and Analyses in New Delhi, agrees. He says, “The show of support for the Palestinian cause among Arab fans in Qatar underlines that the issue continues to echo among common people although this may not be said about the ruling elites.” According to Quamar, however, these protests will not make any substantive difference to the peace process.

Ahmed, however, said, “The superpowers are with Israel but here, in Doha, even if we do our bit for the Palestinian people, it’s worth something.” The Palestinian at the laundry counter of the media centre at the Qatar National Convention Centre said, “Protests must continue. Whether it helps or not.”

At Doha, sports mixed with a variety of political issues. Morocco’s fans, most vociferous and noisy after the Argentines, were all over the fan clusters in Barwa Barahat in Al Janoub and Souq Waqif in downtown Doha singing and dancing all through the night. During the seven matches — including the third-place playoff against Croatia — the Moroccan fans voiced their displeasure at their monarch Mohammed VI’s decision to sign the normalisation agreement with Tel Aviv in 2020. Fifa had banned any kind of political protest in the stadiums but they managed to sneak in banners and posters.

Iran’s show of solidarity for the protests back home by not singing the national anthem before the England match looked like a flash in the pan when they failed to qualify for the round-of-16. Morocco’s amazing run, however, ensured that the Palestine issue was kept alive till the last day of the tournament.

Qatar, like many Arab countries, does not have any diplomatic relations with Tel Aviv, yet thousands of Israelis attended the games. Special arrangements saw Israelis flying directly to the Gulf nation.

Barring a taunt here or a stern look there, Israelis more or less managed to enjoy football without much hindrance. Roy Jankelowitz, a journalist from Jerusalem, did not have a problem travelling in and around Doha. But once, while he was browsing a Hebrew website in the Metro rail, someone cried out: “We have a Zionist amongst us on the train.” During one of the many security checks at the stadium, he was told bluntly by a security person that he did not feel nice that a Jew had come to cover the World Cup.

Indians, too, were branded antiPalestine by many of the protesting Arabs. Comments such as “Why are you so enamoured by Palestine when your government is clearly hobnobbing with the Israeli dispensation?” or “Aren’t you people with Israel?” were common. Said Shaf, “I must say we are let down by India’s stand.”