It’s time for a cuppa

The kettle’s on the boil as tea lounges open up in urban India’s malls and shopping complexes, says Ruhi Batra 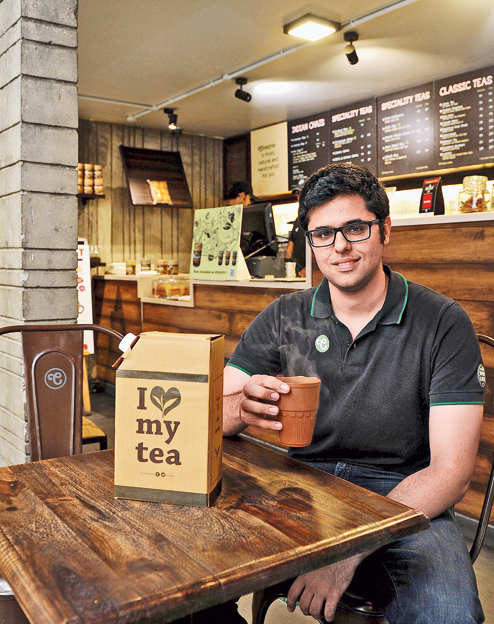 Would you like to try Lapsang Souchong, the Chinese tea that has a smoky flavour and might remind you of a peaty whisky? Or perhaps you’d prefer a Yerba Mate, the Argentinean green tea that footballer Lionel Messi is said to drink before every game? Well, you can have a cuppa of both these and much more at Tea Trails, the cheerful tea lounge located on the sky lounge of an office building in Mumbai’s Bandra-Kurla Complex (BKC).

The couple who put the Tea Trails kettle on the boil are Kavita and Uday Mathur, who made their mark in the education sector before moving into tea — Uday was a partner in the EuroKids International chain of pre-schools while Kavita was head trainer there. They’re targeting a new generation of 20- to 40-year-old Indians who are willing to explore a whole new world of teas. And make no mistake, they plan to have many kettles on the stove. “We want to open 500 outlets in five years,” says Uday, who is crystal clear that he wants to replicate the franchisee model that he perfected at EuroKids in double-quick time. Tea Trails has four outlets in Mumbai currently.

Cut to Delhi where Wagh Bakri, a 122-year-old Ahmedabad-based tea company, has opened three tea lounges — the latest is in the upmarket Greater Kailash neighbourhood. Wagh Bakri is famous for its mass market offerings that are highly popular in Gujarat and Western India, but at its lounges, it’s offering everything from Assam tea to Earl Grey and even iced teas, green teas and also organic Darjeeling tea brews for health-conscious connoisseurs. Wagh Bakri’s first tea lounge opened in Ahmedabad some years ago and it also has two in Mumbai.

Yes, it’s time for a cuppa or two and we aren’t talking about lattes or cappuccinos or anything with a coffee bean in it. The newest entrants to India’s bustling shopping precincts and malls are tea lounges that offer everything from sophisticated blends to strong masala chai that’s an uniquely Indian offering.

At a slightly different level, there are players like Amuleek Singh, who has started Chai Point, which serves tea at what it calls ‘micro hubs’ and also offers ‘chai on call’ delivery services — to offices and shops — from 72 locations across Noida, Delhi, Gurgaon, Bangalore and Pune. “We had seen the power of the beverage. We just gave people a more hygienic option,” says Singh, who worked in companies like Microsoft before spotting the opportunity in tea five years ago “because the average working Indian professional drinks chai”.

According to him, Chai Point serves and delivers nearly 100,000 cups of tea a day today, and has 60 companies from Infosys to Yahoo subscribing to its Chai@Work service. What’s more, Singh plans to take Chai Point to Mumbai, Chennai and Hyderabad later this year, and to triple his stores over the next two years.

One of the early players to spot the opportunities in relatively upmarket offerings was Rishit Patel, who’s a fourth-generation tea estate owner. Patel’s family owns several tea gardens such as Belfari in Upper Assam, and the family firm, Variety Foods, has been exporting tea for years.

“Since we were already packaging teas for high-end international brands, we thought we should get into retail on our own in India. But since doing only retail in high-end teas is not viable here yet, we decided to come out with our teas, pair them with food and open a tea lounge,” says Patel.

So in 2009, Patel moved from Calcutta, where he grew up, to Gujarat to open the first of his Varie Tea lounge in Vadodara. “Gujarat and Maharashtra are among the largest tea consuming markets in India,” says Patel, who is now based in Ahmedabad.

Patel now has three Varie Tea lounges in Vadodara, Ahmedabad and Surat. And it looks as if his reading of the market was correct. His high-end, large-format lounge model has found favour with tea drinkers who are looking for something different from a regular cup of chai.

“While India is predominantly a tea-drinking nation, a lot of this is milk tea. But we have differentiated ourselves by offering a range of teas, including our own signature teas,” says Patel. His lounges offer around 90 teas including 15 signature teas specially blended at his tea estates like the Rose Oolong, a mix of oolong, rose buds and lemongrass. Patel is now thinking big and is looking at 50 outlets in the next two years. He’s already set to open two more in Ahmedabad and also move into Bandra in Mumbai by November.

One person who has seen customer tastes change before her eyes is Anamika Singh, who offers bespoke blends at her Anandini Tea Boutique in Delhi’s fashionable Shahpur Jat. “Till about four years ago, people in India didn’t think too much about tea. It didn’t have the flavour profile that it has today,” says Singh, who grew up on Darjeeling’s tea estates and is a tea sommelier by training.

But that’s changed today. And Anamika has people queuing up for her bespoke blends like the handcrafted Indian Bouquet with its flavours of rose, chamomile, cardamom and lemongrass. “People are more aware of what they sip — and eat — today. And definitely tea appeals to a younger clientele as well,” says Anamika as she serves a pot of pine-wood smoked black tea along with some tea-infused naankhatais.

Apart from her own hand-crafted teas, which are sourced from the family-owned Manjhee Tea Estate in Dharamshala, Anamika offers a range of black, green and oolong teas and also gourmet teas like the limited edition needle tea in her tea room.

The players are all eager to take tea from the local street-corner to the high street, having taken their cue from the ubiquitous coffee chains that have sprung up across India. And they’re experimenting with different formats to brew their ambitions too.

Take Pankaj Judge and Nitin Chaudhary, who saw an opportunity in the corporate workers’ tea-drinking habits and came together to launch Chai Thela in Noida last year. Chai Thela runs tea kiosks across IT business parks and also at the Fortis hospital in Noida.

“We recognised the potential that tea had. It just needed to be packaged better,” says Judge, who wants to dispel the notion that coffee is a premium drink while tea is something that you drink from a street-cart. He adds: “If you offer the same freshly brewed cup of tea in a branded cup at Rs 15 and in a more comfortable environment, why won’t people buy it?”

On the other hand, IIT graduates Nitin Saluja and Raghav Verma wanted to appeal to everyone from young students to their grandparents when they set up their comfortable and affordable tea café, Chaayos, in the National Capital Region (NCR). It was the search for that elusive perfect cup of tea that brought the two tech firm colleagues together. They’ve billed Chaayos as a place where you can chill out with friends over a cup of desi chai — it can be customised from 12 ingredients — or even try an experimental aam papad chai.

“We didn’t want to set up a gourmet tea room. Chaayos is a place where my parents can eat vada pav with ginger tea and feel at home,” says Verma. The first Chaayos outlet opened in Gurgaon’s Cybercity in November 2012. It has since spread to eight locations across the NCR and he has plans to move into Mumbai, Pune and Bangalore within 18 months. What’s more, like Chai Point, Chaayos has also launched a ‘chai on demand’ delivery service in Gurgaon recently.

At Tea Trails too, the Mathurs are experimenting with different formats from tea cafés and takeaway kiosks in malls, to tea lounges in office buildings to a high-street café. “India is the biggest producer and consumer of tea. And, while the world has begun enjoying the health benefits of tea, we are still on coffee. So we want to be the first movers in tea,” says Kavita, who spent three years learning everything about tea before opening the first Tea Trail outlet in 2013.

Now, the Mathurs are ramping up quickly. Two more outlets are in the pipeline in Mumbai. And over the next year, they plan to move into markets like Hyderabad, Bangalore, Pune and the NCR.

Remember, the coffee cafés succeeded largely because most Indians didn’t brew fresh coffee at home, and so were willing to pay a premium for this out-of-the-home experience. The tea entrepreneurs too are trying to match this by offering out-of-the-ordinary teas. So, Tea Trails has over 100 teas from around the world. You can sip a Temi Black from Sikkim or try the gourmet white tea, Silver Needle, from Darjeeling. Then, there are green teas like Genmaicha and Sencha from Japan and also international teas like the Russian Caravan. Prices range from Rs 75 to Rs 160. “We swear by our tea leaves,” says Kavita, who’s also paired tea-infused dishes like Tea Marbled Eggs and a Burmese Tea Salad at her BKC outlet.

Others too, say customers are willing to pay for a great cuppa. “Tea is no longer a drink for poor people. Our consumer doesn’t mind paying Rs 2,000 for a kilo of tea,” says Wagh Bakri’s Desai.

At a slightly different level, Chaayos, too, offers 25 varieties of tea including surprising ones like aam papad chai and hari mirch chai. And even Chai Point, which offers six regular flavours, starting at Rs 20, such as dum (or strong), masala and ginger, feels compelled to serve innovative flavours like apple ice tea and a cold caramel ginger latte, priced from Rs 60 onwards.

Clearly, it’s more than just a storm in a teacup that’s brewing across the country.