Advertisement
Home / Culture / In Another Self 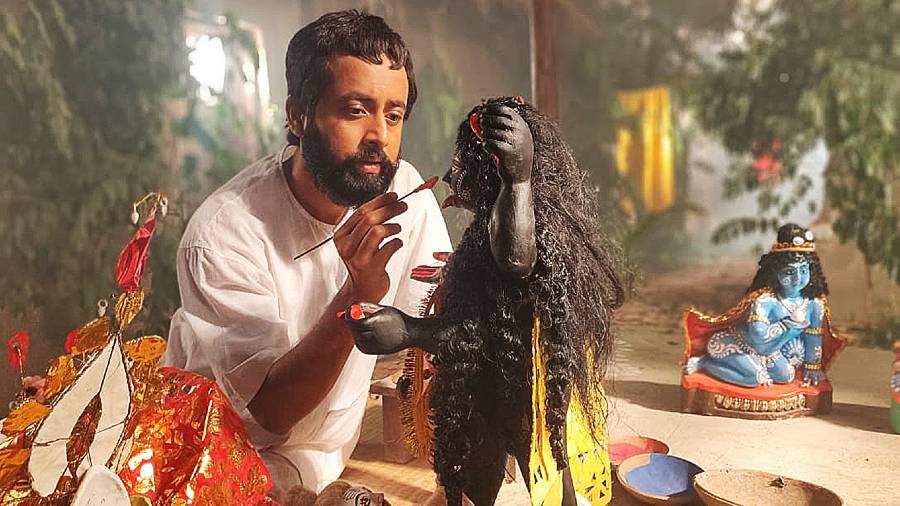 Let me put it this way — if Ramakrishna Paramahansa were to step out of the wall calendar, this is how I would expect him to be. This, as in the way Sourav Saha plays him in the Bengali mega television serial Rani Rashmoni.

I am not talking authenticity of representation here. But day after day, Saha channelises an essence of saintliness that is not out of sync with a broad understanding of the saint.

The serial itself is about Rashmoni, who married into the Kaivarta zamindar family of Calcutta’s Janbazar. “Rani Rashmoni had just completed the Dakshineswar temple, but was finding pujaris (priests) difficult to get because of her low-caste origin. Ramakrishna and Ramakumar eventually obliged,” historian Sumit Sarkar writes in the essay “Kaliyug, Chakri and Bhakti — Ramakrishna and His Times”. This serial has from the outset charted the story of Ramakrishna’s life alongside Rashmoni’s.

Ramakrishna lived not too long ago — 19th century — and there is enough material on him — how he walked and talked, what he said, how it was received, by whom and so on. The Sri Sri Ramakrishna Kathamrita records his conversations. In effect, this would not have been like playing any of the other characters in the serial.

In the parallel entertainment world that is Bengali TV serials, most actors are swallowed up by the characters they play. They collect awards in costume and it is by their screen names that they continue to be known, until the odd stardom rescues someone from this unreality. When I ask around, not too many people know who plays Ramakrishna. And yet Saha has been playing the role for two years now.

I ask Saha if he was chosen because of some physical resemblance and he tells me had I been familiar with the way he looked in real life, I would have been surprised. “A lot of effort goes into growing into the look,” he says. He has had to lose his muscle mass. But it is also a fact that he has a history of playing saints. He played Ramakrishna years ago in a documentary and he has also played the seer Bamakhyapa for another TV show.

How does he explain coming into those roles? “Playing these characters requires a certain acting ability,” he replies and is immediately apologetic. This is not a boast, neither is he passing judgement on those playing other roles.

Some of the other representations of Ramakrishna are Bhagavan Sri Ramakrishna, a 1955 Bengali film. Kanu Banerjee  plays the protagonist here; plaintive, depicting the saint’s struggles. There is the 1979 film Jato Mat Tato Path. Gurudas Bandopadhyay’s “pagla thakur” is high on drama. Mithunda as Ramakrishna in the 1998 film Swami Vivekananda is a surprise.

Saha is clearly not used to talking about himself, much less his craft. The first time I ask him a set of questions about becoming Ramakrishna, he answers thus. How did he approach the role? Bhalobasha. What determined his delivery? Bhalobasha. What keeps his acting in check? Bhalobasha. Mind you, he is not being facetious or trying to dodge questions.

In the course of our conversations, he admits that apart from the sensitive direction and fine script, so much of the performance is in the mind — processing research, compounding it with observation, leaving out, imagining and weaving in, assessing the medium and its reach — that once outside the mind it is not easy to tie it all up in words.

Saha tells me how he knew from his readings that in later life, Ramakrishna had developed corns under his feet. He kept that in mind when he developed Thakur’s gait. He also knew that the saint chewed betel nut, which in turn made his tongue heavy and made him stammer. But he left that out of his performance.

I came across this description in Romain Rolland’s The Life of Ramakrishna, “his eyes never very wide open, but seeing half closed a great distance both outwardly and inwardly. His mouth was half open over his white teeth in a bewitching smile, at once affectionate and mischievous”. Anyone who has watched Saha in Rani Rashmoni will tell you he has approximated that.

He harps on the shorir or the physical form. He has studied that rustic man at a railway station. “His gramya saralata or rustic simplicity permeates his movements. I have seen Thakur’s chhaya in that man,” he says, and explains that beyond acceptability, it is important to get the physicality right because it is the body that “conducts saintliness”. “If Gadadhar didn’t flap about so in agony and wonderment and delight, he wouldn’t be him.” Saha immediately apologises for even beginning to theorise about acting.

Is he religious or spiritual? He replies, “To be honest, I have practised neither.” I ask him about the difficult scenes. He replies, “It is a sleight of camera that delights audiences when they see an idol springing to life. But the actor is emoting with respect to something inanimate.” He continues, “Before the camera rolls, I have to close my eyes and imagine.” Again that word comes up — bhalobasha.

By now I realise that bhalobasha might mean love, but in performative terms it often connotes surrender.

At other times it means consideration.