The Face in Three Mirrors

On the eve of Independence Day, The Telegraph engages with a narrative of serial births on the subcontinent 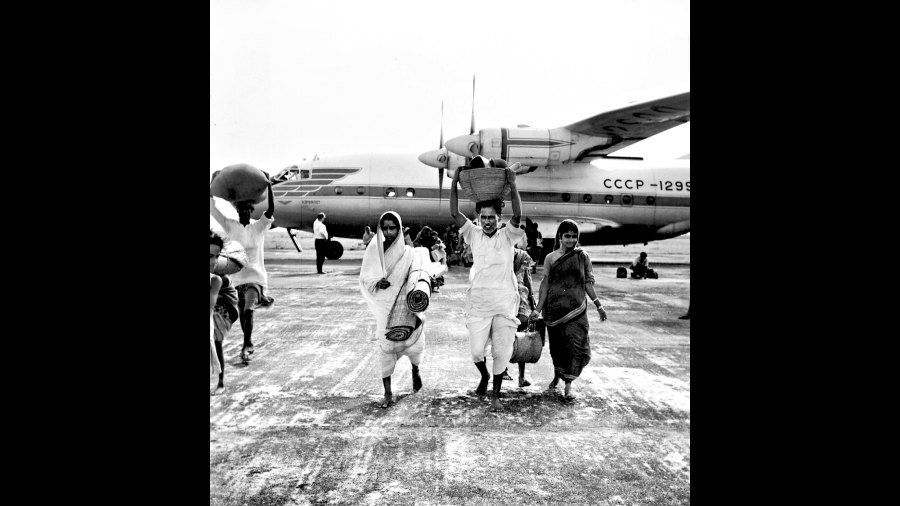 In the life of a nation, the 50-75 age box must be something like the end of early youth in human beings. That would explain the subcontinent’s newfound interest in freedom narratives beyond textbook versions and stirrings of a realisation that the birth of a new country could not have meant the same thing for everyone. That the promised moment, when it was delivered, came trussed in the umbilical.

In the preface to her newest book 1971: A People’s History from Bangladesh Pakistan and India, Pakistani writer-researcher Anam Zakaria, writes: “I knew nothing about the people with whom Pakistan shared 24 years of history. I knew nothing about how they remembered the war… textbooks deal with the subject in a cursory fashion… teachers don’t seem to want to delve into the topic… 1971 rarely comes up in family discussions.”

1971 is about Bangladesh or as Zakaria declares in the preface: “…this book is a Pakistani’s journey of learning, and in many ways unlearning, Bangladesh’s birth story through the oral histories of various Bangaldeshis, Pakistanis and some Indians”. But it is also about those moments in history that led to its becoming — Indian Independence and the creation of Pakistan.

There are 20 to 30 lakh Bengali speakers in Pakistan. They live in settlements, around 105 or so — Moosa Colony, Machar Colony, Lyari’s Bengali Para and so on. Zakaria tells The Telegraph, “This was the first time I spoke with Bengali Pakistanis.”

Flip geographies. Now, replace Moosa Colony with Dhaka’s Geneva Camp and you will be startled by the commonalities. You might be reminded of the detention centres in Assam and their inmates. In Bangladesh, there are three lakh Biharis living in 116 camps. Zakaria interviewed some of them too.

She says, “The interviews give insights into people’s experiences during 1971 and also shed light on what it means to share those with a Pakistani 50 years on. I come from Punjab, a province remembered to be at the forefront of Bengali subjugation. I grew up in a Pakistan that continues to deny Bangladeshi experiences. Some people particularly came forward because they wanted to speak to a Pakistani, to remind me of what had happened. They felt like it was their personal and political duty. Others chose not to share… I think it would have been an entirely different project had an oral historian from outside the subcontinent, even outside of Pakistan, had conducted these interviews.”

Why are there Bengali-speaking people in Pakistan? Adnan from the fishing village of Ibrahim Hyderi told Zakaria: “It’s as if you move from Karachi to Lahore today… there shouldn’t be any problem, right?” Indeed, he had arrived in 1965 from Chittagong. Another interviewee, Farooq, said: “Pakistan se mohabbat ki…” Zakaria says, “Bengali Pakistanis perhaps felt the need to assert their Pakistaniness to me, a Pakistani researcher.”

Both Adnan and Farooq spoke in Urdu but are Bengali speakers. This linguistic identity is what makes them not-quite-Pakistani. The state won’t issue them national identity cards or CNICs. Pakistani newspapers routinely carry reports with headlines such as “Rally demands CNICs be issued to Bengali community”, “Bengalis of Karachi demand urgent resolution to identity problem”, “NA panel asks National Database Registration Authority to rename ‘alien card”’.

Those who arrived before 1971 have to prove, with documents, that they were actually in West Pakistan before the war, but there is no guarantee that having proved they will get the coveted CNIC. Expired id cards are not always renewed. In the meantime — which could be some years or a whole generation — everything, from education to banking is stalled. Yes, for an id card.

In Bangladesh, Zakaria met the Biharis. By 1971, there were 15 lakh Biharis in East Pakistan; people from Bihar as well as other Urdu-speaking people from other parts of India and Pakistan. In the war, the Pakistani army had enlisted many of them to fight the mukti joddhas; after all, they knew the geography intimately and many understood the language.

Several thousands were repatriated to Pakistan after 1971 and up to the early 1980s; others remained, caught in clauses and technicalities that were the state’s making. Within Bangladesh, their story is known. Others may have seen Bangladeshi filmmaker Tanvir Mokammel’s 2007 documentary on the subject, Swapnabhumi or The Promised Land.

In 2008, the Dhaka high court granted citizenship rights to all but those who were adults at the time of the war. Pakistan clarified in 2015 that the non-repatriated were not its responsibility.

To date, all Biharis — even those born after the war — have to bear the cross of being “collaborators”. At a camp in Mirpur, they shared with Zakaria stories of rape and killings of Biharis. One person asked: “Many of our people died. What about (war) tribunals for them? We didn’t all collaborate with the Pakistan Army.”

Zakaria says, “In Bangladesh, the Urdu-speaking community I met with in camps asserted their Bangladeshi identity to me repeatedly. Being interviewed by a Pakistani in Bangladesh, in the presence of security, could of course create problems for them, especially if they were perceived as being nostalgic or pro-Pakistan.”

For these people, Bengali is the language of un-belonging. Khaled Hussain told Zakaria about his reluctance as a schoolboy to sing Amar Sonar Bangla, but years later it was his writ petition that was instrumental in securing Bangladeshi citizenship for post-war Biharis. The thing to understand is that the reluctance and the reaching out are not mutually exclusive things.

In both Pakistan and Bangladesh, in settlements and beyond, Zakaria realised, 1971 had altered the idea of native land.

In Pakistan, Zakaria interviewed Bengalis and non-Bengalis who had to leave or could never go back to what became Bangladesh. She says, “Some of them narrated stories of their parents still dreaming of the homes they had left behind, still aching to go back. But their children have been born and raised in Pakistan, this is the only home they know.”

Many of the signboards in the Bengali neighbourhood Zakaria visited in Karachi were in Urdu, and in classrooms at the Geneva Camp, several children spoke only Bengali. In Bangladesh, Zakaria spoke to those who had been students in the 1950s and 1960s. “For a lot of them the idea of home, of Bengal, of Bangladesh is still forming,” she says. “Events and policies after 1971 continue to create intergenerational impact and transformations too.”

In the book, Zakaria observes how it appears that the people of Bangladesh have left 1947 far behind. She writes: “What the Indian subcontinent was more than 70 years ago stands in stark contrast to where each of the three nation states are today…”

With talks of CAA swirling in the air again, it would probably be fair to suggest that the subcontinental drift continues.

Year of paradoxes: A tale of two abbreviations