Advertisement
Home / Culture / In the shade of the Great Shudder

In the shade of the Great Shudder

Amphan changed the institutional knowledge of the Sunderbans folks. The Telegraph recounts how they lived the countdown to Cyclone Sitrang 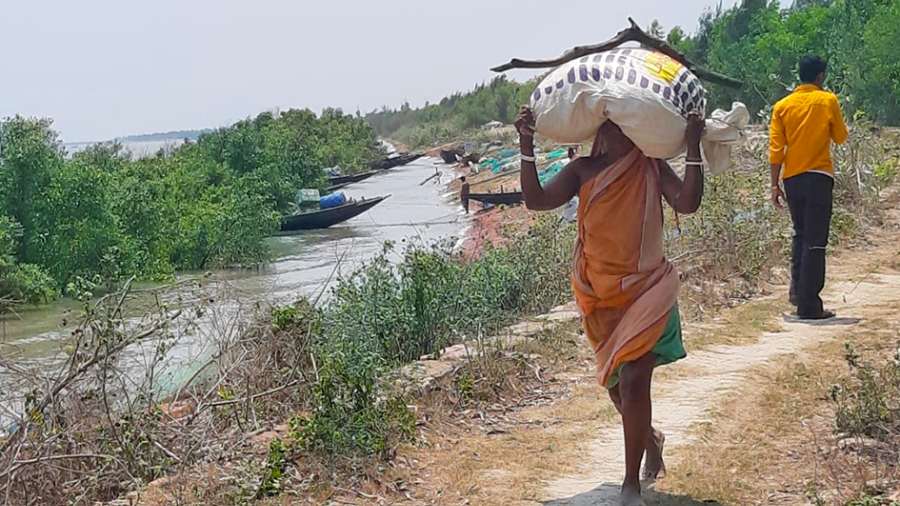 SPEED DEMON: A villager in the Sunderbans’ Kultali heads for the community shelter ahead of Sitrang; a destroyed hut in Gobardhanpur after Amphan.
Photographs by Ujjwal Sardar
Bitan Sikdar   |   Published 13.11.22, 04:15 AM
Gobardhanpur. 5pm, October 24

Shankar Das is taking stock of the luggage for the last time. Hurriedly, with fear-ridden eyes. Outside, the wind speed is changing. It will take time to reach the school building on the village outskirts. His family will accompany him. If it gets late, there might be no space for them at the Ramakrishna Mission Seva Pratishthan either. His neighbour Hari Santra has already left, the Mondals are still packing and the Hansdahs have set out for the shelters. Shankar’s 35-year-old son Bhola says, “The news said nothing would happen here. Still...”

Das doesn’t pay attention. Since May 20, 2020, he doesn’t take any chances whenever a storm is brewing. He says he saw “mahakal” and lived through it. The world knows it by the name of Amphan. Can anyone say for sure that Sitrang won’t be as bad?

The fear of a virus or a pandemic seems nothing in comparison to Amphan. Gobardhanpur took a great punch that fateful night. The village was among Amphan’s landfall zones. Nothing could withstand the impact except for a few coconut trees and shrubs. All the mud houses, including Shankar’s, were razed. Immediately after the cyclone, they claim, “saltwater rain” damaged the paddy fields and contaminated pond waters.

A cyclonic storm sweeps up seawater and sprays it onto the coastal villages. This is locally known as saltwater rain; it can kill vegetation, explains Ujjwal Sardar, who is researching the economic history of the Sunderbans.

“I could not reach the village by car as road connectivity was completely disrupted,” says Sardar. He continues, “Later, the villagers helped me get there on a scooty. It was a hellish sight. The leaves on trees had turned brown because of the saltwater rain,” remembers Sardar, who has always stood by the villagers of the Sunderbans in times of natural calamities.

But all that is in the past now; besides, the state government has taken up quite a few measures to tackle Sitrang’s impact. So why the haunting? “Measures,” laughs the 67-year-old. “You may have measures that involve pumping stations and electricity boards in your city. You may have innumerable modes of transport. Here things are not like that. Here everything takes time. We are not a priority.”

The villagers here have experienced Cyclone Bulbul, Yaas and many others. But nothing can match the destruction caused by Amphan, they claim. It took them many months to rebuild their houses. “For days, even months, the structures stood like ghost houses,” says Souvik Maity, a banker by profession and a social worker by choice.

Maity, who is also a resident of Baradapur village, recalls, “When Amphan was sweeping through our village, we were busy repairing the embankments to check the rising water level. Had they not been repaired right then, the whole village would have been washed away.”

People of this village in Gosaba block throng the flood shelter and village high school well in advance. “It’s surely going to spoil Kali Puja on our island,” says Tapas Kumar Mondal. There is a forecast that the cyclone might blow over the Bagna forest on the south of the island.

“Post-Amphan, we don’t actually wait for the latest update from the meteorological department. By chance, if the prediction is wrong, we’re gone,” says Mondal, who participated in the evacuation arrangements ahead of Sitrang.

“There is a common misconception about storms destroying the Sunderbans,” says Sardar. “People often think that the entire forest bears the brunt of cyclones or storms every time. It’s not like that. Amphan crossed through the southwest part of the forest. For example, villages located in the eastern fringes of the forest were not as affected as Calcutta was.”

“Similarly,” Maity adds, “The relief measures can’t lessen the fear of natural calamities here. Post-Amphan, many NGOs, private parties and the government did approach us with relief materials, and we’re grateful for that. But it’s not enough to remove the fear and apprehension of another attack from the minds of the villagers.”

At the time of this interview, Maity is ready with all precautionary provisions to tackle the impact in case Sitrang changed its course and rammed into their village. But then again, it’s not about provisions but raw fear, which no post-storm backup can alleviate.

“Negative events have more impact than positive ones,” explains psychologist Suvra Chunder. “A part of the brain called the amygdala stores these memories. Any trigger can reactivate those images and cause fear and anxiety. Flashbacks and memory images don’t allow us to forget these events.”

Formed on October 22 offshore the Andaman and Nicobar Islands, Cyclone Sitrang intensified and peaked as a high-end cyclonic storm.

Sitrang bypassed India and made landfall close to Barisal in Bangladesh. But Hari, Bhola, Shankar, Tapas and their ilk are not relaxing; they believe the cyclone is waiting to catch them unaware and they are determined not to let that happen.