There go the corpses, singing 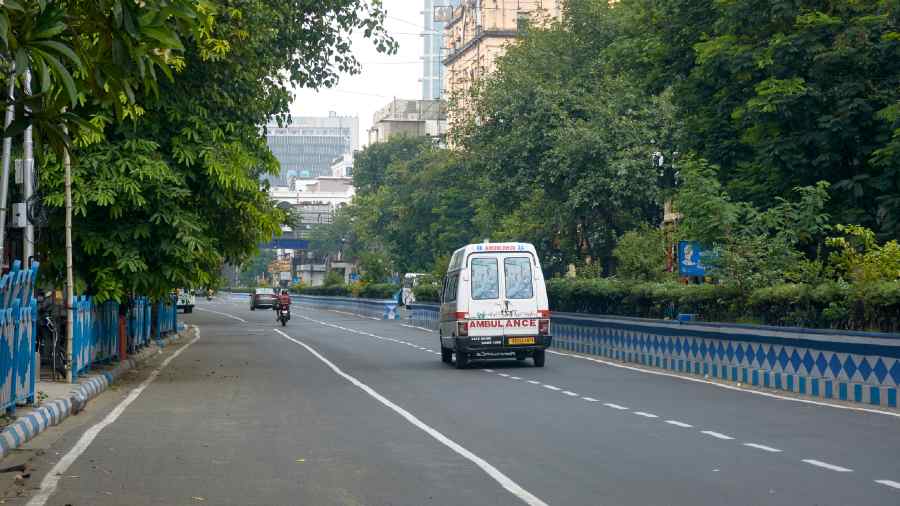 For the ambulance and its choral accompaniment, the siren, have become the sound of this decade ever since the pandemic began in India in January 2020.
Shutterstock
Uddalak Mukherjee   |   Published 30.01.22, 12:09 AM

The sound of music in the Swinging Sixties was, indisputably, that of The Beatles. There can be no argument about the fact that 60 years later, “A” has toppled “B” to claim the crown of the chime of the 2020s. For the ambulance and its choral accompaniment, the siren, have become the sound of this decade ever since the pandemic began in India in January 2020.

And the music is eerie.

During the first lockdown, as a corpse-like Calcutta lay still, the silence would be broken, repeatedly, by the chilling sound of ambulances whizzing past, their blue lights flashing, their sirens shrieking. Just as well, because human civilisation has been known to cast an anxious eye at the not-so-sultry siren. Sirens, the Greeks believed, lured sailors with their haunting music and then wrecked their ships. (Odysseus survived their songs by stuffing his ears with beeswax.)

Yet, originally, the musical notes were meant to strike a different chord. John Robison, physicist and philosopher, is credited with discovering the siren just as the 19th century — the age of mechanical wonders — was dawning on the horizon.

Robison’s sirens were meant to power the pipes of organs — this is unsurprising because the man had Scottish blood. The melody persisted over centuries: sirens have been used by a range of musicians, from Shostakovich to the Chemical Brothers, till Covid-19 changed the music forever.

This transformation — Kafka would have been proud of it — is striking. For the ambulance’s siren is supposed to be a symbol of order and civility synonymous with modernity, its soprano clearing the chaos of traffic so that the ill and the infirm can reach the designated centre of care. (The Red Cross popularised the use of the motorised ambulance during the time of another catastrophe, World War I, revolutionising the architecture of public healthcare.)

Yet, in the post-Covid-19 world, the siren, arguably, signifies the opposite by bringing to mind vignettes of a world turned upside down by a speck of a virus: entire landscapes forced to come to a grinding halt in order to protect themselves; ambulances with wailing sirens racing down dead streets to ferry stricken people whose swelling numbers have, time and again, overwhelmed hospitals. The messenger of hope and healing is, today, the harbinger of terror, real or imagined. Could there be a more bitter pill to swallow for the modern healthcare system and its minders?

A resident of Delhi confided that every time she drives past the All India Institute of Medical Sciences on Aurobindo Marg, she panics: for all that she sees in her mind’s eye at that moment is the serpentine queue of ambulances jostling to enter AIIMS during the second wave of the pandemic.

She cannot be blamed for possessing a feverish imagination. Ambulance Anxiety, evidently, is real. So much so that in March 2021, the state government in Manipur had urged ambulance personnel, along with sundry other occupants of the healthcare hierarchy, to mute the sirens of the white vehicles. The ensuring silence, the wise babus believed, would help soothe the frayed nerves of citizens.

Since then, one of the participants in the Vishwaguru Project has gone a step further. The Union transport minister declared, late last year, that the horn of the ambulance will be replaced by the strains of such traditional musical instruments as the tabla, the sitar and the conch. New India, after all, must have a new beat: perhaps because the horror of government impotence needs to be swept away by the crescendo of paramparic beats.

What the minister may have forgotten is that the conch, in Bharatiya parampara, is also the bugle of war. Kurukshetra, all those eons ago, apparently thundered with the echoes of the Devadatta as well as of the Panchajanya, the shankhs of Arjuna and Krishna, respectively. In Kalyuga, the siren of the ambulance seems to have shape-shifted into a bugle of war. An unending war.

In a televised speech, Narendra Modi had pledged that he would win the war against the coronavirus in 21 days — three more than what it took the Pandavas to win at Kurukshetra. Modi’s India is now being whiplashed by the third wave of the pandemic.

Some things have, admittedly, changed. The nation has been spared a lockdown — till now. The casualty count is, mercifully, low — till now.

But some other things remain the same. Omicron has begun to scalp nearly two lakh Indians on its daily visitations. And the ambulances have begun playing their uncanny music, once again.