Designers who thought about what other women (like her) would want in their closets (and later, their homes) and who solved that problem without elitism. 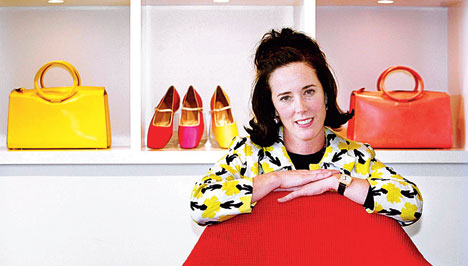 There is a lot of talk these days about the lack of women at the top of fashion brands — the statistics are terrible, the gender imbalance striking. It is one of the reasons Kate Spade, the designer who was found dead in her home on Tuesday morning, was so important to so many of us. She represented not just a terrific talent who built an idea about handbags into what became a billion dollar brand, but a critical figure in the continuum of women who have defined fashion in the US: Designers who thought about what other women (like her) would want in their closets (and later, their homes) and who solved that problem without elitism.

That’s why, in so many profiles over the years, Kate — or her brand, which she personified — was put in the same cultural bucket as everyone from Dorothy Parker and Nora Ephron to the fictional heroines Nora Charles and Holly Golightly. I always thought of her a bit as Mary Richards throwing her hat up in the air with joy at taking on the big city at the start of The Mary Tyler Moore Show, not because they had the same style, but because they seemed to have the same approach.

But it may be more instructive to think of her as a natural heir to Bonnie Cashin, Anne Klein and Liz Claiborne, and the predecessor of Tory Burch and Jenna Lyons during her J. Crew reign, not to mention Stacey Bendet of Alice & Olivia.
In the history of women spearheading fashion brands in the US, Kate Spade was a bridge between the early female icons of the sportswear era, and those of the current lifestyle age. She recognised the looming accessories boom, a bubble we’re still in today, and parlayed her success into all sorts of other areas where a design mind could legitimately have a claim. That seems like obvious strategy today, but when Kate Spade did it, it was wide-open territory.
Her work was fun

So while Kate Spade the company may have begun with a handbag — she Scotch-taped her ideas together out of paper when she was an editor at Mademoiselle magazine — it didn’t end there. It grew into linens, china, picture frames, clothing and personal organisers. She created accessible luxury before that was an official term.

She and her husband and business partner, Andy, mimicked the structure of great luxury houses, with a creative mind and a business mind building a company side-by-side (think Pierre Berge and Yves Saint Laurent, or Valentino and Giancarlo Giammetti). But high fashion is often aesthetically challenging and comes with its own velvet-rope-like barriers to entry, while neither Kate’s style nor her price points turned people away. They welcomed them in. They were not neurotic or conflicted or fraught with existential angst. They were fun. They were also fur-free before it became trendy. The name on the label was lowercase for a reason. Women who bought her products could imagine being her friend.

Mindy Kaling: I have worn her clothes many, many times. They were colourful, bold, cheerful, and encouraged women to find the twinkly person inside them. You couldn’t walk into her boutiques and not smile.

Lena Dunham: Kate Spade was more than a designer. She had a quirky visual language that captivated Bat Mitzvah girls and artists alike. She was also a staple of NYC who spread good will.

Chelsea Clinton: My grandmother gave me my first Kate Spade bag when I was in college. I still have it. Holding Kate’s family, friends and loved ones in my heart.

Each piece promised to brighten a room or an outfit (often literally, thanks to their colour scheme), and the assumption was, Kate Spade the person would too.

Which is also what makes her end so startling. She had been so effective at building her brand, so good at weaving what looked like cheer and wicker-bicycle-basket attitude into every product she made, so adept at consistency of message and mien, that the assumption — even after she left her eponymous company in 2007 — was that as the name was, so was she.

That she later reportedly changed her name to Kate Valentine Spade to reflect the name of a new company, Frances Valentine, and to distance herself from her former brand, seemed to suggest that she had sprung back after her sabbatical from whatever problems had arisen after Kate Spade was sold to investors and then began to change hands with dizzying speed. That she was back.

Though now it seems all those assumptions may have been wrong.

Whatever happened in her life, however, and whatever happens to the brand that still bears her former name, what should never change is the contribution she made: not just to a lot of wardrobes, but to the idea of the American woman. She stepped forward. She opened stores.
She moved all of us along.