Paro in Bhutan is the perfect getaway with its friendly people and the spectacular ‘Tiger’s Nest’ monastery, says SUPRIYA NEWAR 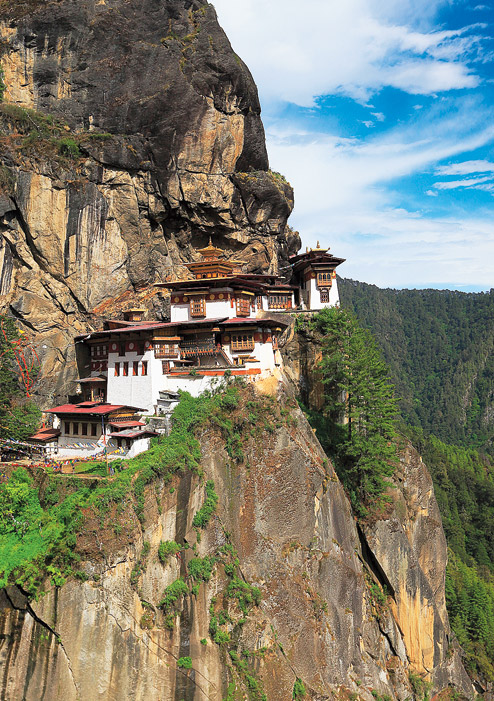 For a country touted as the Land of Happiness, Bhutan delivers every ounce on its promise. From the moment the 40-minute flight from Calcutta takes a sharp right turn towards the mountains and starts descending into the deep valley of Paro, the air is unmistakably different. The airport could almost pass off for a film set, with one lone runway, two flights parked and an open tarmac where you’re free to take photos and amble up to the main three-tiered airport building. Collecting your luggage from one of the two conveyor belts along with immigration (for Indians) is both a breeze and you’re out of the airport in less than 10 minutes.

We spotted our cabbie, Mr Subbu, who, like many other locals, speaks Hindi, Nepali, English and a dash of
Japanese, and drove straight to Gangtey Palace, a 100-year-old majestic heritage family home turned into a hotel. After a hearty meal of rice cooked with fresh asparagus and mushrooms that we picked up on our way, we decided to gaze at the mountains from Gangtey’s expansive sit out as we sipped on Sikkimese tea. With the sun shining, the nip in the air, distant wind chimes echoing out and the lush green Paro valley right upon us, even one of my complete beach-bum friends couldn’t but agree that it was indeed blissful.

It was an effort, but we managed to shake each other out of our mountain-induced reverie and took a walk down town sans a plan, map or guide. A 30-minute downhill tramp got us to the Paro or the Rinpung Dzong, an impressive example of Bhutanese architecture. Alongside the dzong flows the Paro Chhu (river) under a wooden cantilever bridge. Our walk along the river led us to an art gallery where we discovered the most magnificent albeit prohibitively priced thangka paintings.

Continuing our walk, we reached Paro’s main marketplace, a delightfully symmetrical row of traditional two-tier wooden structures with shops on the ground floor. Most of the shops are manned (or womanned!) by owners who are happy to greet Indians. From prayer flags and silver trinkets to glorious incense sticks, artefacts, Buddhas embellished with semi-precious stones, bells and whistling magical bowls and souvenirs galore, the marketplace was a riot of craftsmanship and friendly faces.

After browsing through the colourful ware and shedding quite a few Indian rupees (equal to the Bhutanese Nu and accepted in every denomination), we settled down at a café serving scones and tea. A chat with the locals revealed that we should be at a club called Insomnia which is where all of Paro hangs out on weekends.

Only a few yards away, Club Insomnia turned out to be a karaoke bar where young Bhutan lets its hair down over local brews and Takin wine, belting out Nepali-accented Hindi film songs and rock ’n’ roll. We were welcomed in and before we knew what was happening, microphones were thrust into our hands and our lungs and hearts, pumped with mountain air reached a crescendo of notes in a small blue blinking bar in Paro.

By the time we left Insomnia, the stars were out and the Paro Dzong was standing out in its white splendour in the pitch black stillness that enveloped the hilly town. Spent, we hit the sack, praying for a clear day that would allow us to climb the Tiger’s Nest.

Our prayers must have been answered because the next morning turned out just right for the climb. Taktsang Monastery, or Tiger’s Nest as it’s popularly known, is a sacred monastery founded by Padmasambhava, or Guru Rinpoche, who’s said to have flown from Tibet on the back of a flaming tiger in the eighth century and meditated in a cave for three months at this site. Located at 2,950m above sea level this is the most famous and the only cliff-hanging monastery in Bhutan.

Incidentally, this was my second time up and it was as arduous and delightful as the first. The pathway cuts through rocky mountain edges, forests lined with scented pines and the occasional flourish of blazing rhododendrons in full bloom.

All along, at every bend, there’s a prayer flag quietly cheering you and fellow climbers from all parts of the world, marching up. Midway, you get a chance to cool your heels at the Taktsang Cafeteria which serves momos, soft drinks and butter tea and offers a fantastic vantage point for photography.

This is the final point for those on horseback, because from here the bends and slopes get trickier and steeper and you find yourself stopping at the ubiquitous mountain springs for a gulp of fresh water. We finally made it up to the last few yards and negotiated the really steep steps right before the entrance.

The monastery stood gleaming in its white exterior with red adornments and a gold cupola roof, looking strikingly spiritual. As we finally entered, the priest urged me to roll the three-dice set in front of the deity. I willingly obliged and the dice rolled out in a trio of fives, adding up to 15. The priest in broken English jovially said: “Good number. Number of Guru Rinpoche. He like you!” Thanking the priest, I muttered to myself: the feeling is definitely very mutual.