Advertisement
Home / Culture / He who moved the movies

He who moved the movies

For years, when men, women and children shuffled into the theatre hoping to get lost in a make-believe world, he was there steering the dream ship 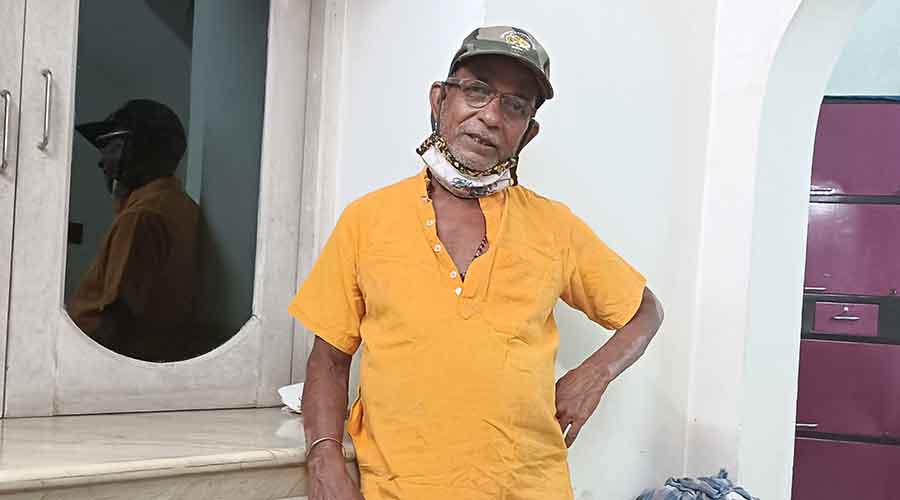 The hall was abuzz with people restlessly waiting for the film to start. It was 1961. The Uttam Kumar-Suchitra Sen starrer, Saptapadi, had just hit the screens. Bhowanipore’s Basusree, those days a “luxury cinema hall”, was the first to screen it. A 16-year-old was in charge of the projector. He had checked and rechecked the belt and the sound system. Says Sukumar Ghosh, who has been a projectionist for a half century now, “My handling of it had to be perfect. Even a small error of judgement would mean loss of scene, sequence and sometimes even the lyrics of a song.” Saptapadi is well remembered for its songs, especially the number Ei poth jodi na shesh hoy.

Ghosh is now 67, officially retired but still attached to Basusree. He tells his story animatedly.

He was a teenager when he got a job as a projectionist at Chhayabani cinema hall in the then suburban Rajpur. Ghosh’s father was not happy. “Out of nine brothers and two sisters, I was the only one getting into this line of work,” he says with a smile. Later, however, it was his father who introduced Ghosh to one of his friends. “Rabikaka was also a projectionist. It was he who told me about the job vacancy at Basusree. I took six months to learn and master how to operate high-end projectors. Basusree had three of those,” he says.

Saurav Bose, who is co-owner of Basusree, explains the workings of a projector.  “It is a huge machine weighing about 250 kilograms and as tall as a man of average height. It comprises two magazine boxes, one on top and one below. A 35mm film reel is loaded onto the top magazine box. A motor, somewhere near the feet of the projectionist, continuously unfolds the reel from the top magazine box and refolds it into the lower magazine box. During this process the film gets exposed to a blinding light from a carbon inside the projector. The image produced is magnified by a lens and is projected onto the screen.”

Two projectors kept side by side would work in tandem. The watchwords were “Start” and “Change Over”. And God was in continuity.

Ghosh says, “The reels had to be changed such that the film would continue uninterrupted — a blank screen was not desirable at any point.” He continues, “I would constantly stare at the screen — from my station at the small window beside the projector — without blinking. That was my job from 12 noon to 3pm, from 3pm to 6pm, 6pm to 9pm and 9pm to 12 midnight. The night shows used to be full.” And when a film like Saptapadi would run for 15 or 20 weeks, Ghosh would have to watch four shows a day of the same film, without a break.

Apart from the technical knowhow, there was a catalogue of protocol that projectionists had to follow. When inside the projection room, they were not supposed to talk to each other. Ghosh says,

“Whenever I needed something, I would tap my forefinger on the magazine box.”

In the early 1970s, when top stars would make Rs 1,000 per film, Ghosh made Rs 1,000 per month. He would cycle 35 kilometres every day to Basusree and back. Bose says it makes him sad now to think that not everyone in his family valued or even understood Ghosh’s skills.

“That is true for almost every projectionist,” is what Ghosh has to say.

But surely Ghosh made mistakes in his long career? “Never,” says our man. “There were glitches that were beyond my control. At times, the reel would tear. Those instances I would have to join it with a special glue. You had to be skilled enough not to lose any part of the film. Ensure no dialogues overlap.”

Then there was the motor that would act up. Says Ghosh, “And the screen would immediate-ly turn black. We would have to display the regret notice — ‘sorry for the interruption’ —  and as if on cue, the audience would start to boo. Next, the lights in the hall would come on and the spell of cinema would shatter.” It would take a maximum of two minutes to change the belt. But by then the manager would have telephoned. “The aftermath of such a failure would invite a show cause notice from the manager to the projectionist.”

Ghosh remembers how once he had to manually draw the film out from the top box to keep the show running. He says, “It is a very painful job; I could not have continued for too long.”

Till 2002, there used to be 15-22 reels for a movie. In 2005, Basusree started using digital projectors. Today, films are loaded onto a machine called 2K. It looks like the CPU of a computer machine, only double the size. “It is all about selecting a switch and letting the movie play,” says Bose.

Ghosh misses the cinema-going audience of the old days. “Though I hardly had any time to see what my audience was doing, I knew how they were feeling from the sounds. Saptapadi would end but people would float out laughing and talking.”

Street theatre speaks for the mangroves