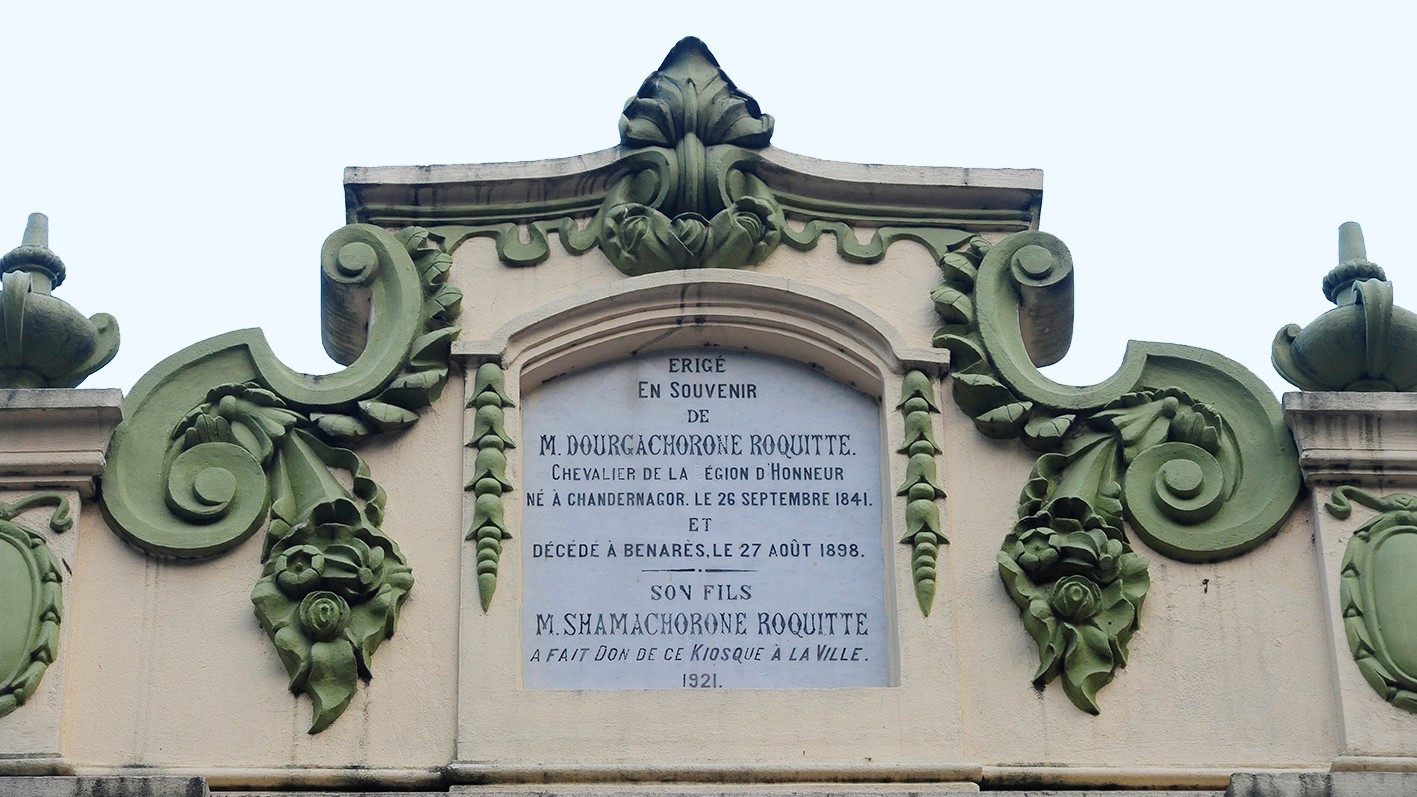 DUO LINGO: A plaque in French atop a Chandernagore house incorporating the Bengali sounds of the names of the owner
Pradip Sanyal
Upala Sen   |     |   Published 28.03.21, 02:08 AM

I first heard of Le Petit Bengali from Sharbatanu Chatterjee, a neuroscience researcher, based in Paris for now. Le Petit Bengali is the name of a French newspaper published from Chandernagore in the 19th century.

Chatterjee says in an email, “You see, I am very interested in how cultures respect and represent their dead, so I make it a point to visit mausoleums and cemeteries wherever I go. The South Park Street and Lower Circular Road cemeteries of Calcutta, tiny Swiss village cemeteries like the one in Morges, huge ones like Highgate Cemetery in London... When I moved to Paris, I was excited about the possibility of visiting the great cemeteries of Paris.”

The Père Lachaise Cemetery of Paris is apparently one of the most visited necropoles in the world and among those from India who rest here are J.R.D. Tata and the family of an old magistrate of Bengal. Says Chatterjee, “It is while researching this crematorium that I chanced upon Le Petit Bengali. The newspaper had reported the opening of the crematorium.”

Shubhrangshu Kumar Roy is a retired person based in Chandernagore who prefers to call himself a history enthusiast. He shares with me a page from the widely referenced book Sankshipta Chandannagar Parichay by Harihar Seth. The page has a list of newspapers and periodicals published out of the French town. Among a list of Bengali and English names — Samaj Darpan, The Beaver, Dhumketu, Tit for Tat, Bangaprabha — stands out the second entry with a French title — Le Petit Bengali, published in 1880 by Charles Dumaine.

Turns out, the Chandernagore municipality was created on August 1 in 1880; Monsieur Dumaine was the first mayor. There was most likely no official connection between the newspaper and the municipality.

Chatterjee, who has since clicked through scanned copies of the newspaper, says, “It carried news from French India, British India, metropolitan France, other French colonies, as well as advertisements, school results, declarations of births, deaths and marriages, poems, and jokes.” There were advertisements about a chateau on sale at “quartier de Gondolpara”. And notices in Bengali, alongside an English translation such as this one — “A reward of Rs 25 is offered by Mr Liotard to any person or persons who will give such information as will lead to the arrest and conviction of the thief or thieves and to the recovery of all the property stolen from his house, etc.”

On social media, where Chatterjee had posted screen shots of Le Petit Bengali, someone explains it is not to be misunderstood for a condescending title. Le Petit Journal and Le Petit Parisien were two of the largest dailies at the time. Chatterjee’s riposte, “Oh, I never thought of it as condescending! Having grown up with Tintin, I know of Le Petit Vingtième quite well!” Le Petit Vingtième was the youth supplement of a Belgian newspaper; it was edited by Herge and The Adventures of Tintin first made its appearance in this paper.

According to Roy, the French newspaper was printed in Calcutta. Around 1882, Teenkorinath Bandopadhyay of Gondolpara started a Bengali newspaper, Prajabandhu. He set up a printing press at his house. In time, Dumaine decided to print Le Petit Bengali out of Teenkorinath’s press. Of course, most of this is oral history.

Chatterjee points out how the French language managed to incorporate sounds from Bengali while transcribing names and events of Bengal into the Latin script using French phonological constraints. He cites an issue from 1883 that has a line or two about “Les vacances de la Dourga poudjah auront lieu cette année du 6 au 17 Octobre”. He also draws attention to a prize distribution list and the names on it — Premier prix Pourno Chondor Boiragui; 2e, prix Nondo Lal Dotto... “Many names spelt the French way are closer to their Bengali pronunciations than if they were transcribed the English way,” he observes.

Roy remarks that the paper was “unorganised”, a combination of many things but lacking in a definite editorial policy. It also had very little to do with Bengalis — the newspaper title notwithstanding — and Chandernagore.

A reader from Chandernagore complains in Le Petit Bengali how the place has become almost a colony of Pondicherry. Then there is a Note de la Redaction of a previous article wherein a reader from Karaikal is enraged that the newspaper has confused the lingam, which denotes “Civa” and the saligram, which denotes “Vishnou”.

Chatterjee’s social media posts about Le Petit Bengali elicited a fair number of reactions. I noticed one such thread about a French phrase. Thus went the exchange:

Chatterjee: Yes, someone finally noticed it! Very pre-1905, eh?  When I asked Chatterjee he drew attention to the wording below the newspaper masthead — from 1888 — in bold serif font. It read “Dieu et Patrie”, meaning God and the Fatherland.

Chatterjee explains, “By pre-1905, I was referring to the 1905 French law on the Separation of the Churches and State, which form the basis of French laïcité even in present day metropolitan France... Laïcité, the official French form of secularism, is very different from the official Indian form of secularism. Post-1905, it would have been taboo to have a newspaper publishing news of the French government to have the word Dieu in it, despite the fact that such freedoms and laws were not meant to be extended in the same manner to the colonies.”

He adds, “This laïcité in practice, that might forbid any visible ‘clues’ of religious symbols, is aggressively applied almost to a fault in the present day.”