In the early 2000s, London and New York woke up to Indian menus that served individual-plated portions of food, resplendent of the French nouveau cuisine 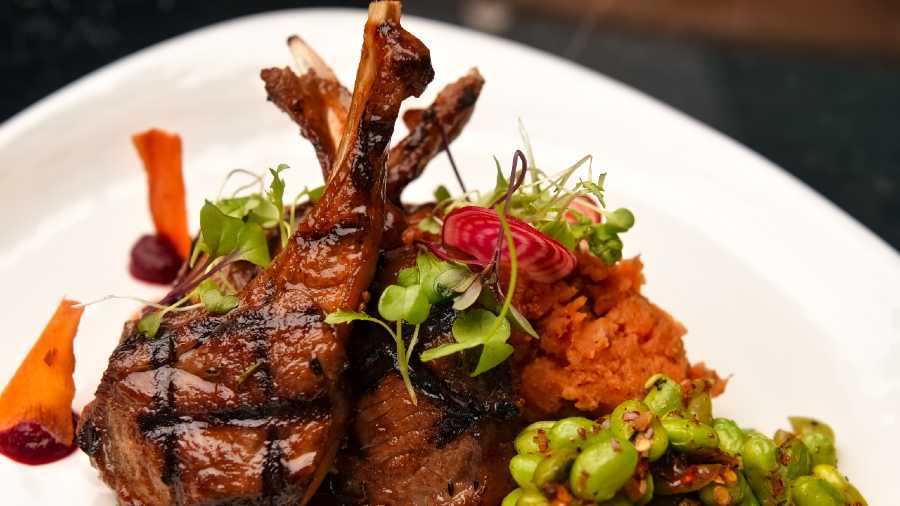 Last evening, as I was returning home from dinner, a terrible remix of a much-loved Bollywood song was playing on the radio. As every hair on my arm stood in revolt against this mashed-up tragedy, my mind wandered to my dinner, which was an excellent rehash of a much-loved food memory. The blue cheese naan, a staple at Indian Accent, has become a mainstay at many restaurants around the world. But not everyone gets it right — not every time. It got me thinking: Is modern Indian cuisine a good thing?

The modern Indian cuisine wave, some believe, is inspired by French nouvelle cuisine, which looks to produce delicate, light dishes with an added emphasis on presentation. Although, that was not always the definition of “modern” when it came to Indian cuisine. In the 1980’s, just presenting food in an elegant and refined manner to match the ambience of the restaurant was enough for it to be labelled modern. For more than two decades, that was the mainstay of the modern Indian restaurant. In the early 2000s, London and New York woke up to Indian menus that served individual-plated portions of food, resplendent of the French nouveau cuisine — the first step towards revamping curries and making them international. But, it wasn’t until Chef Gaggan Anand and Chef Manish Mehrotra entered the food scene that the dramatic changes we now see came about. Their food philosophies were simple. Stick to the flavours but cut out the fat. No, I don’t mean to reduce the ghee or oil in the cuisine — let me try and explain to you what I think modern Indian cuisine is.

Reinvention is a term thrown around rather loosely these days.

However, true reinvention comes when the essence of the food has not changed, yet everything else about it has. Molecular gastronomy is one of the ways of introducing textures in food. Think bursting spheres of yogurt, chutney foams, plastics that melt away the moment they touch your tongue and, of course, the ever pervasive liquid nitrogen, which is the bread and butter of most “modern” restaurants. The chefs who started the modernist movement used these techniques to enhance the visual and sensorial aspects of the dishes they served. Never were they meant to take away from the traditional essence of what that dish meant.

Soon, the fancy claptraps of spheres, foams and smokes became the highlights of the dish —hashtag worthy moments that looked great on the plate but disappointed the taste buds.

Internationally Indian food even half a century ago was relegated to a handful of curries, naan breads and kebab-style meats. Even in India, restaurants served the same kinds of food under different banners and price tags. The ambience changed, but the menus remained the same.

This comes as a shock since the Indian subcontinent has as many cuisines as it has languages. A truly Indian menu would look to pay homage to all of these diverse cuisines. This is the change that the modernist approach brought about — locally sourced ingredients presented in a fresh fashion deeply rooted in traditional recipes and techniques.

If you would consider the Mehrotras and Anands to have ushered in a second wave of modern Indian food, hold your hats because there is a third wave too. A move from seated multiple-course meals destined to show up on your calendar for a celebration, to an easy-going night out with friends. Spanish tapas-style small plates that don’t seek to impress with the gimmicky theatrics, but still root to make you happy.

Chef Thevar of Thevar, in Singapore, boasts of mackerel and tomato chutneys in dosai wraps and Chettinad chicken rotis on his menu, effortlessly incorporating modern values to age-old recipes. Closer home, Chef Manu Chandra is combining wholesome flavours with an international flair, much to the pleasure of his diners. Adding aam panna to vodka is a stroke of genius. It’s elevating a familiar taste to new heights with sensible, symbiotic additions — as I was saying, max the flavour, cut the fat!

Have you ever had a favourite comfort food demolished in the name of making it modern? I’m talking overcooked pasta in butter chicken gravy and an overdose of basil in the name of Thai pav bhaji! You’re not alone, but do be glad it didn’t almost cost you your life! In 2017, a cocktail made fancier with the ubiquitous liquid nitrogen burnt a hole in a man’s stomach! Thank goodness for an emergency surgery that saved his life, but led to the ban on use of chemicals in food in Haryana.

The awareness surrounding using these modern techniques is minimal. All products need to be treated in a certain manner to achieve optimal results. Try frying a croquette in cool oil, or baking a pizza in a toaster oven! You get the idea, if things aren’t respected and used the way they are meant to be, the final product will not shine. Nay, it will be inedible! Hordes of wannabe restaurateurs creating flash-in-the-pan modern Indian dishes have given the cuisine a bad name. They’ve been so focussed on the presentation and gimmickry, they’ve forgotten the essence of food — flavour and depth. To add to the dismal flavour profiles, the overuse of test tubes, syringes and miniature stainless steel crockery takes away from what food is meant to be. Diners, thankfully, are now waking up to shunning unimaginative food being paraded as modern.

Keep it simple! Form is temporary, flavours last forever. You will always remember the best bread, the creamiest ice cream or the most tantalising pizza you had. But, you may forget a dish fraught with theatrics but lacking taste. Jiggs Kalra, the force behind restaurants like Farzi Cafe and Masala Library amongst others, was an early adaptor of molecular gastronomy. He had said that he would play around with plating and form but wouldn’t touch the essence of the dish, and that is key!

Priyanka Chopra’s restaurant, Sona, in New York, serves dishes like Bengali Mustard Tofu, Feta Malai Kebabs and Dahi Kachori with Passion fruit Yogurt. It’s a nod to the modern while retaining Indian techniques and profiles that hit home, because it takes creativity to be truly authentic.

In the right hands, modern Indian cuisine has a very bright future! Now, please excuse me as I sip my tamarind-laced whisky cocktail to beat the heat! 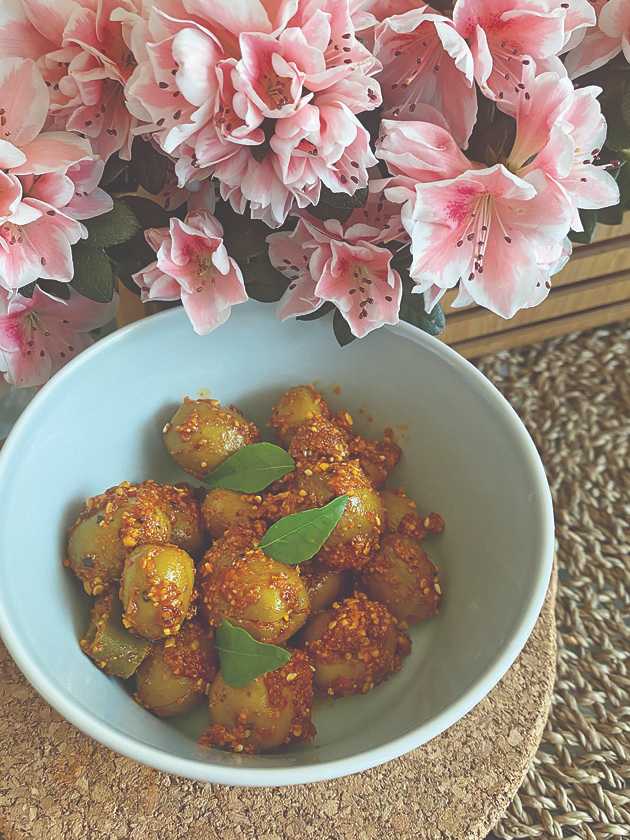 • Pimento stuffed olives (remove brine water and wash it) 1 can

• In a pan, heat the ghee, add olives. Let the ghee coat the olives.

• Add the malagapodi to the pan and let the olives coat everything very well.

• This is a good snack, can be used as a side with drinks. 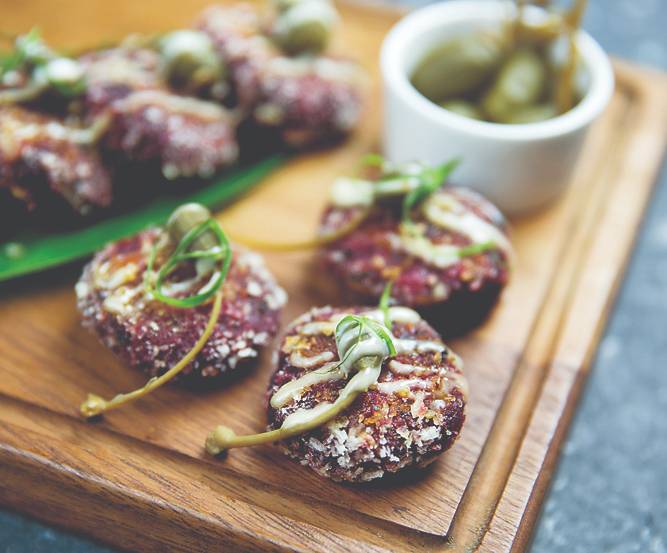 • Add grated beetroot, and grated potato, garam masala. Saute it and finish it off with coriander leaf and salt.

• Add roasted crushed peanuts and mix it. Make small balls of this mixture — put a dollop of peanut butter in the middle and make a ball.

• Dip the roundels in the tempura batter and then roll it in panko bread crumbs and grill it on the pan.

• Wasabi mayo: Take wasabi paste, mayonnaise, salt and lemon juice and give it a mix.

• Quinoa puff: Boil quinoa in water, drain the water out, pat it dry, bake in oven at low temperature, till crispy. 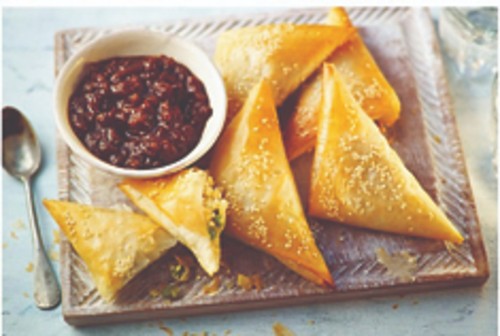 • Heat oil in a small non-stick pan and fry the mustard seeds until they begin to splutter.

• Add blanched spinach and peas, stir well and add the spices, mango powder, salt and a splash of water. Cook for 1-2 minutes, then remove from heat and transfer to a bowl.

• Unroll the pastry and cover with cling film and a damp tea towel. Peel off one piece and keep the rest covered so that it doesn’t dry out. Lay the pastry sheet flat on a clean surface and brush with melted butter. Fold in the shape of a samosa.

• Place one rounded teaspoon of the filling mixture and fold enclosing the filling and forming a triangle.

• Brush the outer surface with more butter. Place onto a baking sheet and cover while you make the rest of the samosas. Sprinkle over a few sesame seeds, if using.

• Bake in the centre of the oven for 30-35 minutes, or until golden and crisp, turning halfway through the cooking time.

• To serve, place the samosas onto a large serving plate with a bowlful of spicy harissa chilli oil. 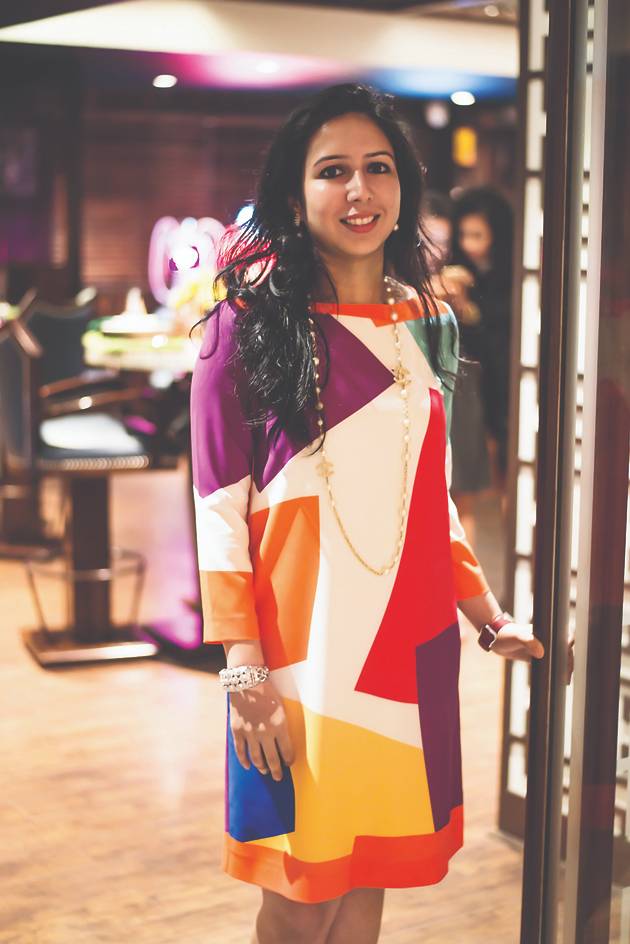