Advertisement
Home / Culture / Fetch the ghee and fritters, someone!

Fetch the ghee and fritters, someone!

The Telegraph brings you a generous serving of the festive khichuri 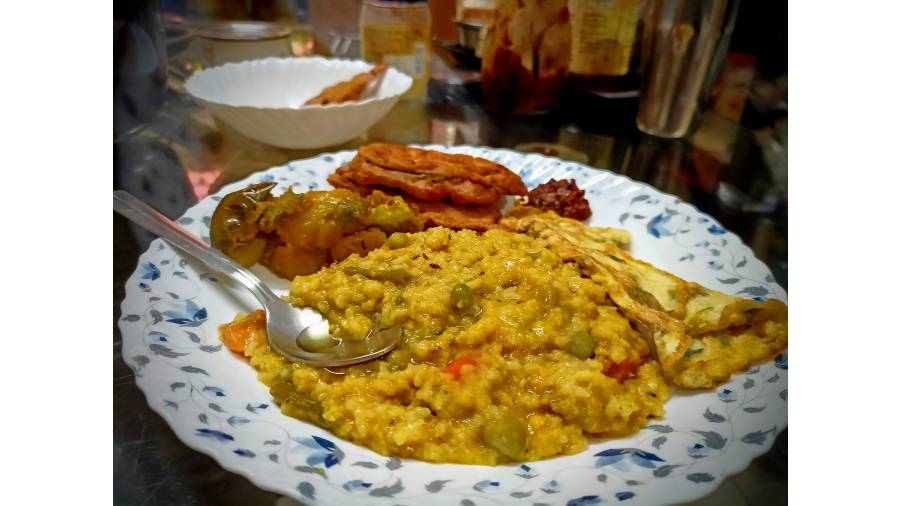 A fistful of moong dal and another of rice, the short-grained fragrant gobindobhog, cooked together and served with desi ghee. In Bengal, this dish is known as khichuri and it is the favoured offering to deities at any puja. Durga Puja is no exception.

It is a combo offering with labra, a medley of five to nine kinds of vegetables; bhajas or fritters; tomato and date chutney; papad, and payesh. “The same preparation cooked on any other day or any other occasion doesn’t quite taste the same. It is as if something of the divine enters the khichuri that day,” says Sulagna Bhattacharya, a Calcutta-based homemaker in her forties. She giggles like a teenager over the phone, then quickly clarifies that the very mention of khichuri lightens up her mood, brings back delicious memories.

“Lentil in a khichdi is a must,” says foodie and food critic Pushpesh Pant. He uses the almost generic term khichdi. Pant continues, “But khichadi is a kind of porridge. The first time khichadi was formally declared a staple food of the people of the Indian subcontinent was 1,000 years ago, when Muhammad Ghori invaded us. Persian scholar Abu Rayhan al-Biruni had come with him and it is he who made a note of it.”

In Pot on the fire: further exploits of a renegade cook, John Thorne and Matt Lewis Thorne write, “Because all cultures begin poor, some form of gruel provides the base note of all cuisines”. Khichuri, khichdi, khichadi sound like the lowest common denominator.

Ghori’s khichadi and the khichuri belong to the same family. As in Bengal, in Assam and Odisha too, khichuri is popular, has a religious association. Then there is the ven pongal of Tamil Nadu served on Tamil New Year’s Day. And the Kannadigas enjoy their bele huggi at Karnataka’s Shri Krishna Matt. All of them lentil and rice preparations in various permutations and combinations.

Khichuri in Bengal is always niramish or vegetarian,” says Nandini Deb Bourani, wife of Aloke Krishna Deb, a descendant of Calcutta’s famed Sovabazar Rajbari. Nandinidi, as she is known, has over the years developed a reputation as a custodian of traditional Bengali food knowledge, apart from being a fine cook. She explains how khichuri is made with gobindobhog, which is satvik or pure in itself.  “It’s aroma is unique. A non-vegetarian addition would disturb that.” But at the Sovabazar Rajbari annabhog or any kind of rice preparation is absent in traditional Durga Puja offerings.

“Khichuri is a full meal in itself; some even add seasonal vegetables to it like peas and cauliflower,” says Manzilat Fatima, a fifth-generation descendant of Nawab Wajed Ali Shah and an excellent cook herself. Some like to have it with fried egg, some will even break a whole egg while it is still cooking, others like to stir in fried cauliflower florets, and still others like to throw in whole baby onions in the dish to add a sweetness.

Married into a Bihari family, Manzilat has learnt to cook khichdi too. “It is a soupy dish and has masoor dal. There are variations too. Some make it with chana dal and call it kabuli. They add beef to it and call it khichda,” she says.

“Khichuri and ilish machh bhaja is something I used to relish,” says food entrepreneur Minakshi Lahiri. She is now based out of Delhi, but she spent her childhood in then Bihar’s, now Jharkhand’s, Dhanbad district. She says, “Whenever they’d declare ‘rainy day’ at school, I’d look forward to the mouth-watering khichuri which I knew my mother must have cooked at home. And the hilsa too.” But she remembers that her history teacher, also a Bengali, would talk about having khichuri with jhal, a spicy mutton dish. And some others preferred to add prawns to their khichuri.

Pant talks about Birbal’s khichdi made with nuts, pistachio and almonds. The Bengali bhuni khichuri has shades of Birbal’s khichdi. Balai Haluikar, who has his own catering business, says, “Bhuni khichuri is the most-wanted dish be it Sitala Puja, Vishwakarma Puja, Saraswati Puja, Loknath Baba... ” It is dry like fried rice and has peanuts, cashew and a lot of ghee in it; it is a little sweet to taste.

In the Mughal era, Prince Salim was served khichdi after he conquered Gujarat. Only, it was made with bajra instead of rice. “It is metaphorically suggestive of Salim devouring Gujarat,” says Pant.

The nawabs of Lucknow liked their khichuri stirred. Instead of moong dal, they used the mash ki dal or biuli dal and gosht was added to it. Says Pant, “While the Bengalis would have it with vegetables, the Anglo-Indians of Calcutta made it more like a jalfrezi — a mishmash with leftovers from the previous day, cooked along with rice and lentil.” This too was called khichuri.

In Egypt they eat koshari, which is very similar to khichdi. The story goes that when British soldiers travelled to Egypt during World War I, they introduced it there. Then there is that enduring quarrel about khichuri and English kedgeree, which came first and so on.

British journalist Bruce Chatwin had asked Indira Gandhi while she was campaigning for the general elections, “You have said the Janata Government is a khichri. In England we have the same word, ‘kedgeree’.” This must have been 1980. Indira replied, “Yes, we used to have it for breakfast at Teen Murti. Lady Mountbatten taught my father’s cook how to make it: smoked haddock, rice, and hard-boiled eggs. But in India khichri means mess.”

And that’s the beauty of khichuri, it will be whatever you want it to be.