Advertisement
Home / Culture / Festivals as messy and fun as Holi

Festivals as messy and fun as Holi 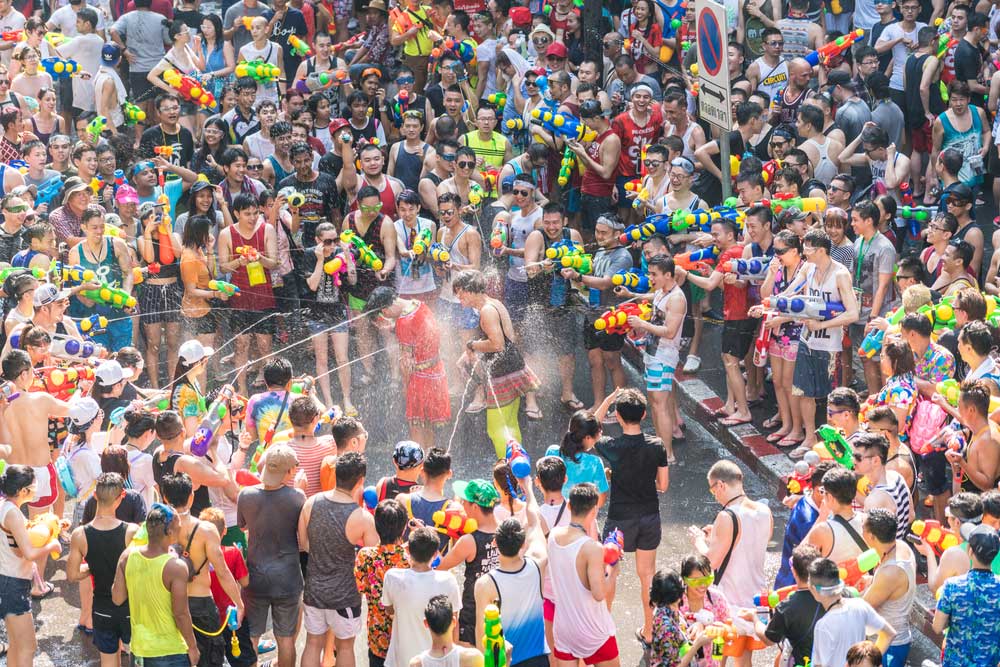 Holi the festival of colours is celebrated over most of north India to mark the end of winter and the advent of spring. In Punjab it is celebrated as Hola Mohalla, while in Assam it is called Basant Utsava or spring festival. In Maharashtra it is highlighted by the matki phod (breaking the pot) tradition where a pot of buttermilk is hung high and young men form a pyramid to reach it and break it. It’s another harvest tradition as the breaking of the pot is supposed to symbolize a good harvest.

There are other festivals across the globe that like Holi are messy and fun. Here are a few.

In mid-April, the Thais celebrate their new year with a big water fight. People run around the streets throwing water at everyone, a bit like Holi. Songkran, which means to move or pass into, comes from the Sanskrit word samkranti, which means astrological passage. Traditionally, Buddha statues were washed and people sprayed that water on friends and family as blessing. Over the years this turned into a water fight.

The Battle of the Oranges in Ivrea, Italy
(Shutterstock)

Battle of the Oranges, Italy

The Battle of the Oranges is a festival celebrated in the Northern Italian city of Ivrea which includes a tradition of throwing oranges at each other. One of the biggest food fights of Europe, nearly 500,000 pounds of oranges are destroyed over three days. Legend has it that an evil marquis tried to rape a young woman but instead she decapitated him. In the aftermath of his death, the people of the town stormed his palace in revolt. It is this revolt which is symbolized by the Battle of the Oranges every year. The town people divide themselves into teams and then hurl oranges at each other trying to ‘kill’ people from the other team.

Held on the last Wednesday of August, La Tomatina is officially the world’s largest food fight. It is held in Bunol, a small town near Valencia with a population of only 9,000. Over the years the festival has become extremely popular with tourists and in 2012, nearly 50,000 people descended on the small Spanish town to participate in the festival. Since then it has become a ticketed event and only 20,000 people are allowed into town. It was featured in the Bollywood film Zindagi Na Milegi Dobara.

The tomato fight is allowed for only one hour. After which fire trucks spray down the streets and the people. The festival is sponsored by the Spanish government and trucks full of tomatoes drive into the centre of town. Tomatoes are over ripe and come from a town called Extremadura, where they are especially grown before the festival.

Boryeong is a small town around 200 km south of Seoul where the annual mud festival takes place every summer. It started only in 1998 but has become extremely popular and nearly 4 million people participate in it. The festival started as a marketing gimmick to promote Boryeong’s cosmetic industry and its age-fighting mud.

The idea is simple, throw mud on each other either as individuals or as teams. No one believes in remaining clean.

Celebrated on the 29th of June every year in the small town of Haro in Northern Spain, La Batala del Vino or the Battle of Wine festival involves throwing wine at each other. Spain has declared it a festival of national and touristic interest. It all started sometime in the last century when priests started anointing patrons with wine rather than water during baptism at the chapel of San Felices de Bilibio, the patron saint of the city. In the ensuing years, the baptisms became celebrations and finally led to the wine battle.