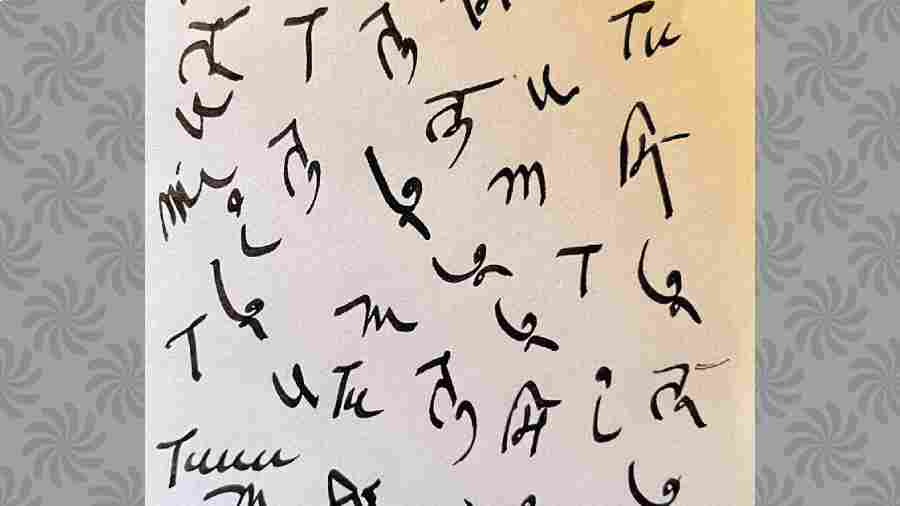 I have this reflex when strangers and young strangers address me as tumi. I flinch. It feels a bit like I have been dragged into a nudist colony. Then, unable to bark a correction, I play along, but much like a really uncomfortable fully clothed person among nudists.

Tumi is the second personal pronoun in Bengali. It connotes a certain familiarity between addresser and addressee. There is a Bengali saying that goes sneho nimnogami. It means sneho or affection moves in a downward direction, from those older in years to those younger in years. It is the same with tumi.

It blooms like endearments, when age meets youth. It also connotes a certain degree of intimacy. In black and white Uttam Suchitra films there was always that melting moment when the hero and heroine slipped from aapni to tumi. That cult song from Saptapadi that goes “Tumi bolo. Na, na tumi” could never have worked with aapni.

Aapni is more restrained, more about boundaries. Tui, no matter what the prescribed usage, has been an all-time favourite of mavericks and rebels. In the early 2000s, there used to be two talk shows, Ebong Rituparno and Ghosh and Company, both hosted by the late director Rituparno Ghosh. In these shows, Ghosh, very idiosyncratically, referred to many of his guests across age groups as tui.

It did jar the ear — and there is recorded testimony of the fact that Rituparno was aware of it — but as the show progressed, the viewer could work it out that the pronoun had not been sprung upon this di and that da. It was an established private practice. On the rare occasion, it even softened the blow like the time Rituparno reprimanded a popular TV and radio personality on the show for a comic act that had hurt certain sensibilities.

I am not getting into the abuse of tui to suit class/gender equations, but in The Origin And Development of the Bengali Language, 20th century linguist Suniti Kumar Chatterji identifies the nominative tui as “old singular, new singular, contemptuous or affectionate for juniors and familiars”. Against tumi he writes, “old plural, new singular, inferior and familiar”. About aapni, he says the extension of the sense from the reflexive to the honorific second personal pronoun is a recent thing, a New Indo-Aryan practice.

Chatterji cites early Bengali documents such as a letter dated 1555 from the Koch king of North Bengal to the Ahom king of Assam, where tumi is used in the respectful or honorific form and not apani. However, that was not the norm, not in the 20th and 21st centuries.

The last 10 years, Bengalis in Calcutta have started drifting from aapni. Should you ask someone, chances are you will be told it is an archaism we are better off without. It is possible that social media and texting have helped this oversimplification — everyone is either friend or follower or unfriended and unfollowed with nothing in between. Perhaps philosophically too, tumi is closer to the world-is-flat brigade with their easy access to multiple platforms and global citizenry.

Whatever be the reason, the impact of this grammatical drift is becoming apparent now; everyone is tumi-ing. “At parties and get-togethers. Where you meet someone for the first time,” says Ajantadi. “Girls in malls and beauty parlours,” adds Sucheta. Student to teacher, the teenage shop boy at the neighbourhood mishti shop to the obviously very senior citizen with a walking stick, the new-to-the-Metro person asking the complete stranger which train to take. “An artist’s wife who was visiting from Bangladesh had said to me how she finds the tumi culture among Calcutta Bengalis so offensive,” says Chhandasi.

Younger people said they were “okay” being addressed as tumi.

“Aapni makes me sound old,” said one. Those in their 40s and above objected to being tumi-ed for the same reason this young person and others like her said they felt uncomfortable being aapni-ed — age. Does this mean by the time the 20-somethings turn 40-somethings they will also develop an allergy to tumi? The very amiable senior NRI neighbour starts when addressed as aapni. Do I think he approved of that instance when PM Modi revealed in an interview that POTUS “Barack” and he were on “tu-taadi” terms? Nah. Then why now? Robert Frost said good fences make good neighbours. Good aapnis too.

My problem with the tumi brigade is they don't put any premium on consent when it comes to this usage. And yet, surely, in these boundary-conscious times, jumping into familiarity cannot be interpreted as a sign of being progressive, no more than jumpingonto another person withouthis or her express or silent consent? In both cases, you have to earn the intimacy, arrive at it.

You might be able to "hook up" with someone at first swipe, but can you even begin to inch your hand towards his/hers? A line by the poet Sankha Ghosh comes to mind. "Haater upor haat rakha khoob sohoj noy... To place one's hand over another's is no easy task."

I agree. And aapni?