On World Elephant Day, The Telegraph gets a candid interview and exclusive glimpses of the actor’s favourite elephant clicks 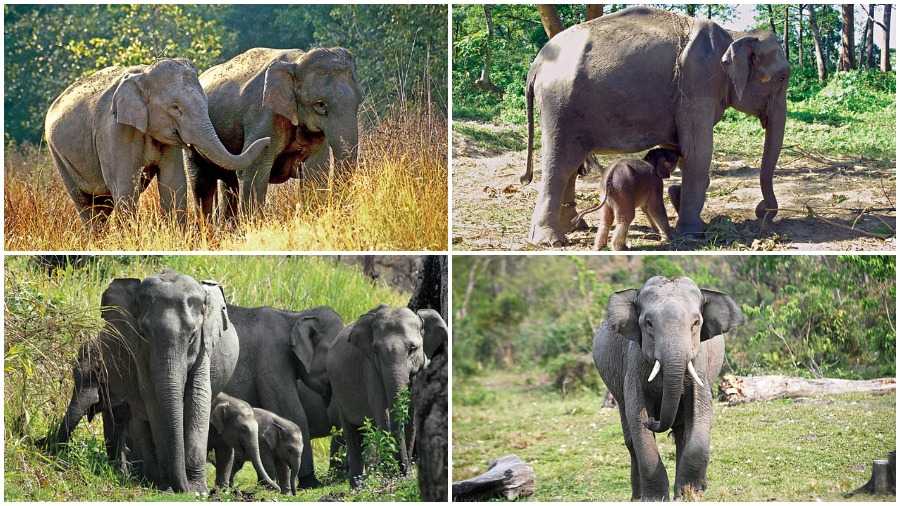 Actor Sabyasachi Chakrabarty’s passion for the jungle and wildlife is no secret. In a rapid-fire interview with The Telegraph in 2008, he had candidly claimed to like this passion over his acting career when he was given a choice between the two. Thirteen years later, on a recent Sunday evening, when t2 asked if he still feels the same way about his passion, he said: “Yes, definitely! If I have any tour planned and someone approaches me for shooting, I tell them that it is not possible to give a date around that time as I have a tour planned... I won’t do that film and will do some other film but my first love still remains. If the shooting date is given ahead, then definitely I won’t go for a trip around that time but when the plan is already made, I don’t do it... and elephants are my favourite wildlife! They are really nice.” Excerpts from the chat.

Firstly, we must consider what we are watching. Are we watching wild elephants, zoo elephants or trained elephants? There are three kinds. The elephants that live in the zoos have been captured and are habituated to staying in captivity, so they are different compared to the other kinds. I have walked into such elephant enclosures, fed and touched them. They are interacting with humans for a long time and the elephant calves who are born here are very friendly.

The Kumki elephants that are captured by the forest department and are trained to work for the department, help in capturing wild elephants, and take tourists for rides too. These elephants are quite reliable, except for a handful who are ill-tempered. Some are very reliable and I would like to mention two such elephants with whom I have toured many times and after whom watchtowers have been named too. Jatra Prasad was the name given to a huge elephant in Gorumara. It served the forest department extensively and was a very nice elephant. Chandrachur was another elephant from Gorumara after whom another watchtower was named. These two were very obedient and dedicated elephants of the forest department.

The third kind, which is absolutely unreliable, is the wild elephant. Watching wild elephants is a different thing altogether. We should not watch wild elephants from close proximity at all and should not intimidate them in any manner. Some tourists don’t know much about wildlife tourism. They come close and intimidate the animal by hurling words at them, which the elephants don’t like at all. The forest guides often ask them not to behave in that manner.

We should not make noises while watching them. They tend to get irritated, and they have a fantastic memory. They can remember things for very long. Their eyesight is not that great but their sense of smell is great. They identify well by seeing and smelling, and it stays in their memory. These elephants are very aggressive, if we cross any limits they can charge at us instantly. During my trips, I have had to face that at times. So, those who go to the forest to watch wild elephants should be very careful.

Shooting wild elephants is not really different from shooting other animals in the wild. But elephants tend to hide and they do not like tourists. If they are in a herd and the herd has elephant calves, then they become even more sensitive. So, one should be extra careful.

The elephants see the forest department people regularly, if they accompany tourists then there is no problem. But seeing just the tourist makes them feel nervous and they can behave unpredictably. We should not be overconfident. They can upturn big trucks; small cars are nothing to them.

As per my experience and from stories I heard from experts too, the worst elephants are from West Bengal, maybe because of the man-animal conflict. Assam’s elephants are not so aggressive. Elephants of North Bengal, Midnapore, Dalma could be very aggressive.

I have been to Tsavo National Park in Kenya, and over there elephants don’t come anywhere near humans. They are huge and hide behind the trees. The guides told me that the elephants there were scared as poaching used to happen there earlier. The government finally stopped it with stricter rules, but these animals have seen everything with their own eyes as they are about 50-60 years old, they have lost their herd members. But Maasai Mara’s elephants are way more friendly. They come very close to humans. They know that humans won’t do anything to them because they have not faced poaching as much as the elephants of Tsavo did.

While driving through Corbett we spotted these two elephants and stopped to click a few pictures. The driver and guide asked me to hurry up. I couldn’t understand why they said so. This frame with an adolescent male elephant and an aged female elephant was on the left side of our car, and on our right was a similar grass field with many elephants. I could see that these two elephants were a bit nervous. I was clicking them and after some time, both of them moved their ears and trunks and made a huge call taking their trunks up in the air. The guide told me to sit back immediately in the car. I was about to ask them why, when both these elephants started charging at us. The driver started driving very fast and we went to a distance and waited. Then we noticed that they were crossing the road to join their herd on the other side, and along with these two elephants, a 2.5ft elephant calf came out. They were thinking we were creating an obstruction for them to join their herd on the right as the car was parked in the middle and that is why they charged at us. No matter where I go, if I see an elephant, I stand a little far away from it. I don’t try to click pictures anywhere near to them because they are very unpredictable and we can’t understand what is making them angry. Before I understand, they will pick me up and throw me away!

We went to Madari camp inside Jaldapara, which is an elephant orphanage and specifically used for elephant training. Elephant calves that get separated from their parents are rescued by the forest department to put them back in their herd. But the elephant’s body smells of humans due to the human touch and when they are taken back, they are no onger accepted in the herd. The rescued elephants are brought to this camp and are trained to make them a part of the department. This big trained elephant in this picture had given birth to this small elephant just four or five days before our visit. I was amazed to know that. The guard pointed out the fur on its skin, just like human babies have a lot of hair at birth. The fur will come off naturally. I didn’t show much courage and clicked them from afar as the mother was staring at me. Later, the baby went and slept on a leaf bed and I went to take a close-up. Just like human babies, this baby elephant had long curved toenails. I was so surprised to see that. They told me that when the baby will start walking the nails will gradually fall off and the feet will be flat with stubs. That was the first time I saw a four-day-old cute baby elephant with big toenails. It was such a revelation!

This picture was another revelation moment for me about elephants. The place where this picture was taken was very nice, with a view of the river Brahmaputra. We had stopped for a few pictures, but after a while, the guide suggested that we should leave as he could smell elephants coming. So, we left the place and returned later to find that the herd was standing blocking our way. We waited for a long time, and the mother who is staring straight at the camera, standing on the left, was standing exactly like that and didn’t move. The kids and other elephants were moving about, but she stood still. After I clicked a few pictures, the guide instructed me to sit in the car. He started to talk to the elephant, addressing and gesturing her with a “baba namaste” and spoke the rest in Assamese. I understood that he was saying that we came here to see the forest and won’t harm you, we want to leave, could you please allow us to pass by. If you go back to the jungle, we can leave. And surprisingly, after five minutes the herd moved away. She was the last to move as she was the protector. It was a wonderful experience. It is not that the elephant understood what the forest guide was saying, it is the attitude. The forest department respects them a lot, and in turn, they are respected by the animals too. That was a great revelation for me, and that increased my love for elephants even more.

This was one of the scariest experiences. We were travelling around West Manas, and there was a watchtower beside which we spotted many elephants of different sizes. So, we started clicking pictures of them. This male elephant was there too, about 20 to 25 years old, and very energetic. They were moving towards their right, and I was clicking them hiding behind a car. He suddenly saw me, and I don’t know what made him angry, he charged. The speed is unimaginable! In a matter of a few seconds, he picked up a speed of 30 to 40km. I stood and watched the way he moved his ears, trunk and charged straight at me. I was standing very far from him, so I ran hurriedly and got inside the car. It didn’t come towards the car though. I always click from a distance, from behind a car or a tree, and didn’t understand what made him angry, but this charging is dangerous. He could easily upturn our Gypsy.