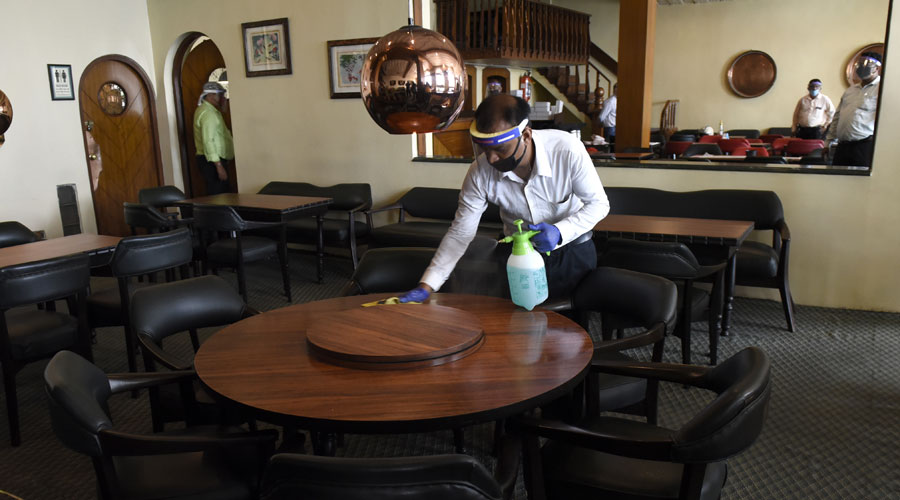 I decided not to tell my parents about the coffee date, nor my friends. It’s just coffee, I kept telling myself as I added a dash of lipstick. My pulse raced and I realised how unprepared I was to step out, cross the road and walk to the nearest café in the locality. That’s what Covid-19 and the three months of staying cooped up at home has done to me.

I was still not sure if it was safe to grab a cuppa with my husband, even when “unlocked”. Of course, I was in my armour — mask — and wielding sanitiser. But the what-ifs kept cropping up in my mind. It’s just coffee, I told myself again and again.

It was a mere 300-metre walk from my house to the café in south Calcutta’s Hindustan Park area. Twice I wanted to turn back, especially when it started to drizzle. Going out for pleasure in the rain feels like double sin post-Covid.

As I reached the large portico of the café, a man rushed at me even before I could shut my umbrella. He was equally anxious to check my temperature and save the world. More jitters! What if all the brisk walking had meddled with the body temperature? What if I was asked to stand apart?

But I was cleared and asked to step in, sanitiser in hand. I started to relax. The bustling place where I would often take my friends and pose for countless selfies had mellowed in these few months. Fewer tables, masked waiters and disposable crockery gave it a different feel. Even the old menu had made way for a makeshift one. I looked around for the regular faces. There was none. The few tables that were occupied were spaced out. I recognised a waiter who would often serve us. He waved his gloved hand from a distance. I am sure there was a smile behind the mask.

I remember spending hours here, but today I preferred to hurry my order. Two mochas, no food and make it quick, we told the waiter. We were in no hurry but too uncomfortable to hang out late. We felt we were wronging the world in some way.

And then came the moment of crisis.

As the steaming coffees came in takeaway cups, I was not sure what my next move should be. Should I remove my mask and keep it on the table? Should I hang it from some place? Should I remove it at all or just slide it down my face a little? Eventually, I gulped my coffee, mask in hand and sanitiser on table.

It was the quickest coffee date of my life and I was glad when it was over. Both my date and I were more taken up with sanitising our hands, seats, bags and phones, rather than making conversation. We walked back relieved, happy to escape from the scene of crime and determined never to cross the line again.

No photographs were taken, no eulogies written on Facebook and all evidence of the evening removed.

But we crossed the line again, the very next week. To be honest, this time it was an unplanned sin. We had been running errands near Ballygunge Place when a popular Bengali eatery caught our eye. Going for a meal to this restaurant usually entailed a wait. I would see serpentine queues outside its gates during festivals. But now it stood almost deserted. The temptation was too much to resist. The partner in crime and I made a beeline for the empty gates, emboldened by our first dereliction.

Again the mandatory checks. Temperatures recorded, hands sanitised and, this time, even our shoes were wrapped in blue plastic before we were let in. Empty rooms greeted us as we stood in our funny blue footwear. The tables had been reduced to half, the buffet discontinued and there was no other guest in sight. It seemed as if the whole place was waiting for us — a flattering yet daunting feeling.

The waiters admitted they were getting used to packing takeaways rather than serving guests. That Friday, we were their first customers at 1.30pm. Again, a quick meal on disposable plates and glasses, which we helped the cleaners dispose of.

We don’t touch the plates once we serve the food, said a waiter. The guests have to serve themselves and another batch of staff cleans up later. It felt odd to remove disposable plates from plastic covers, wipe them with tissues and serve each other daal and aloo bhaja with wooden spoons. The sauce with the fish fry came in a small plastic container. Only two tables stood in that room offering guests a lot of space if they did plan to drop in. We ate in peace with no hovering waiter, clanking crockery or noisy chatter disturbing us. Yet, after a point, we missed that free-flowing cheerfulness. The meal was good, but as we walked out I felt hungry for the not-so-sanitised old normal.