The bus I miss

A paean to a gentle giant called the double decker 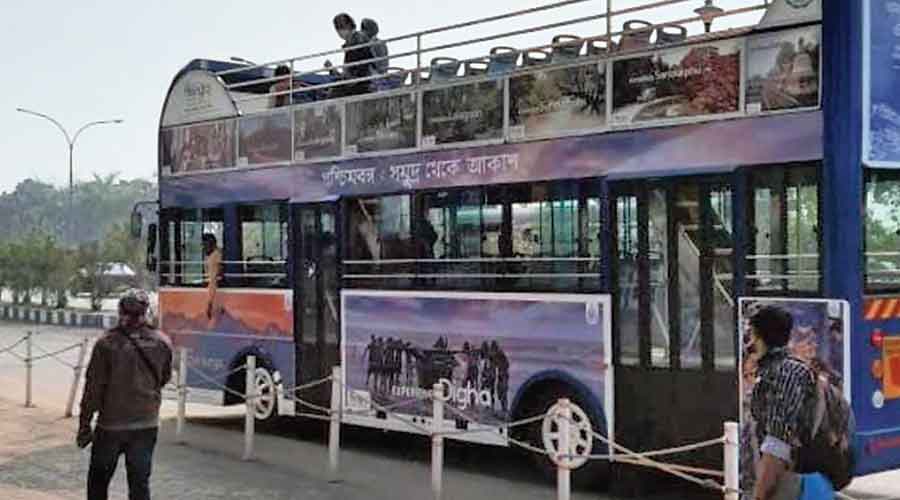 My double decker delight proved to be short-lived. Having read about its comeback for some months I was looking forward to the actual event. No matter that the natty open-topped indigo blue fleet — I saw pictures of them — was nothing like the wobbly top-heavy creatures that disappeared from the streets of the city in the 1990s. But then the virus wheeled in the pandemic and out went all real and imagined bus rides, joy rides.

Yes, I have a double decker connect.It goes way back to the mid-1980s, when I arrived in Calcutta from the steel town of Bokaro.

Those were overwhelming times for more reasons than one. Too many differences. In the Bokaro of the 1970s and 1980s, there were no public buses or taxis or autorickshaws; cycle-rickshaws and personal vehicles were the only options. In comparison, the roads here seemed garrulous. All kinds of vehicles, incessant honkings, the cries of conductors, the ting-ting of trams, hawkers hopping from bus to bus with their bottles of lozenges or packets of dhupkathi, and of course, the thick crowds.

I can still see my 18-year-old self as she stood then, transfixed as mesho (uncle) pointed to that which was to enable the daily commute to college.

There it was, a scarlet behemoth parked at the bus terminus in north Calcutta’s Paikpara. To the 18-year-old it looked like a red, many-eyed ogre — two front windows on top, two more at the bottom and a slot on the forehead with the route information right next to the little box that had “33” written on it in big white font. Below its black pug nose was the vehicle’s registration number. Before the teenager could internalise it all, her guardian hustled her to the rear end of the vehicle and led her up the stairs.

To date I remember the narrow climb up and the fear of bumping the head. That day, mesho and I were the first ones upstairs and we picked two front seats. It was only after we were seated did mesho reveal that he had spotted some passengers headed this way, prompting him to break into a competitive rush for the “best seats”.

As the bus lurched to a start, I clung to the window rails lest I got thrown out. But that wasn’t the end of my agony. As the vehicle turned left towards Belgachia, I had my heart in my mouth. And thereafter this happened every time the bus turned a corner, particularly a left turn. What with the weight of all those people hanging, if the bus toppled… I shuddered inwardly but couldn’t get myself to share my thoughts with my uncle.

Mesho in the meantime was excited for me. He kept pointing out landmarks along the route. The red Parshwanath Temple, R.G. Kar Medical College... When the bus drove to the highest point of the Belgachia Bridge, all I could see to the left were huge trees, shrubbery and some buildings, grey and coated in dust. After prim and propah and sparkling Bokaro, if all of it seemed rather off-colour to me, I cannot remember anymore. But I do remember being charmed by the view from high up. Up there, I was far from the madding crowd — those on the roads, sidewalks, those hanging from the doors and windows of other buses, and this one as well — passengers were not allowed to stand on the upper deck.

While returning from college that day and thereafter, I wasn’t always as lucky. The front seats were often occupied and the other seats on the upper deck were not as much fun as the view ahead was obstructed by the passengers’ heads. In fact, the first time that happened, I plonked myself in what I thought was the next best choice — a seat in the lower deck, up front and left, just behind the driver’s chamber.

Little did I imagine the scare I was in for. I hugged my college bag tight as the bus hurtled through Padmapukur, Entally, Sealdah, over tramlines paved with unevenly placed dark stones... Every jerk had me worrying that the ramshackle, jangling bus body would detach from the driver’s chamber. Added to that was the misery of being too close to the crowds. That’s not all, branches of trees threatened to poke one in the eye if the bus inched too close to the pavement.  Soon after, however, I moved into the college hostel and there was little occasion to fight for double decker seats.

The city’s first few double deckers had debuted in 1926, a Shyambazar to Kalighat commute. The way things are, what with the pandemic and the vaccine shortage, I have now revised my original plan. In 2026, when the Calcutta double decker turns 100, I shall take a ride.