Diving into the underground music scene 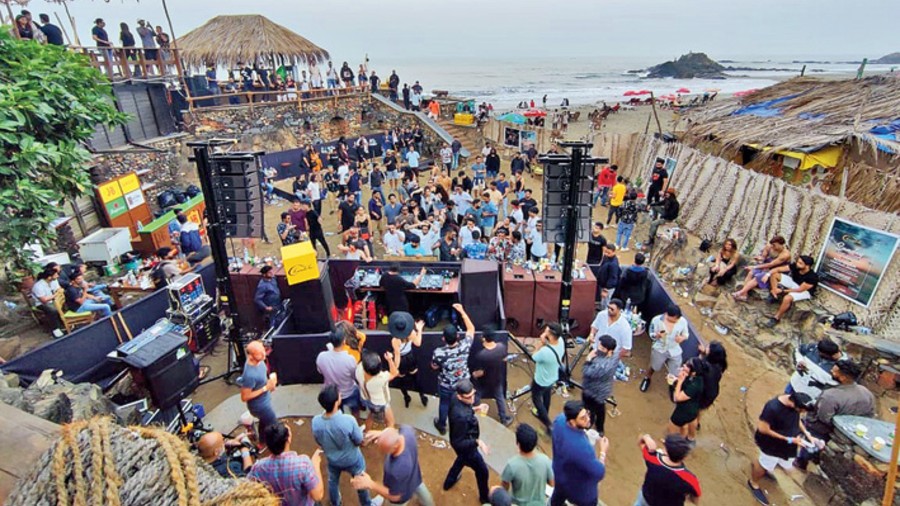 The first time I went to Goa with friends was back in 2017. A huge group of us were going for the reowned Hilltop Festival, which is a psychedelic trance music festival organised by Starling D’Souza and his team. Back then, I didn’t have much knowledge of what psy-trance was. Just rapid, repetitive beats with psych-type melodies. From then till now, I dived into the underground music scene and got a better understanding of what psychedelic trance is, along with techno and electronic music. That’s why during my trip in February this year, I had a better understanding.

Upon landing on Day One, I travelled to Vagator and made Chronicle the location of my first night out. Owned by Deepesh Sharma the open-air venue is right on the seashore where people outside the club can also enjoy the music. Chronicle was having a techno event that night and I had entered in time for Zeeqar Lakhani’s set. Zeeqar is a producer from Goa who plays around with techno and melodic house. It was a dark night and Zeeqar’s melodies and basslines created a super vibe with the crowd. There were smiles and people were making new friends. 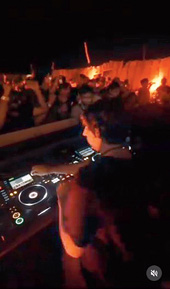 After stepping out of Chronicle, I could hear a very faint sound of another party that was happening not too far away and yes, I wanted to go. After a five-minute walk on the beach I found myself at Shiva Place cafe. Now, this was a strict psy-trance party where the music was more energetic than progressive and had twilight and dark sounds and melodies. Darkpsy is a sub-genre of psy-trance, which is on the heavier end with tempos around 148 BPM and above, approximately. The dance floor was packed till the end with people who wore art on them, literally! From the person who was tattoed from head to toe to the lady who wore sunglasses, a crown and a white dress and was smiling like a dollop of happiness, everyone was putting all of their energy into enjoying the music. I also matched my steps to darkpsy as much as I could, till I called it a night and prepared myself for Day Two. 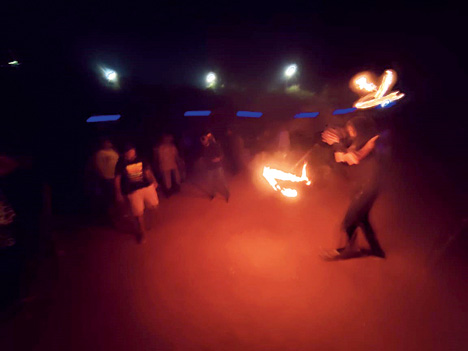 An artiste doing fire and flame tricks at Pinakin Beach

On Day Two, I was made aware of a promo party of a psychedelic trance festival that was happening at Pinakin Beach and I was glad to be present for it. Russia-based artiste Fungus Funk was down to play at this promo party and, of course, at the festival. So after devouring a king crab at Brittos in Baga and being provided with the set timings by DJ and organiser Mohsen Mehdiyan (or Moss), we stepped in to Pinakin Beach on Vagator. The moment I walked in, I knew it was going to be a solid night. A big stage set-up with trippy visuals with the DJ in the centre of it all along with a fire artist who was legit playing around with fire, using a pole, kerosene and, well, his mouth. The set-up was arty, colourful and mind-bending to an extent. The first act we got on stage was Shivadelic who was packed with energy. His set had a bunch of samples flying in all directions, with hard-hitting kick-drums and suspenseful build-ups. He was followed by DJ Dee, who’s set followed a similar pattern but took it a few notches higher with his personal touch. Following Dee was Corrupt Illusionist aka Mohit Jain. His set took a dark turn where the basslines were heavier than before and the melodies and samples would echo around, setting itself as a perfect opening set for Fungus Funk. 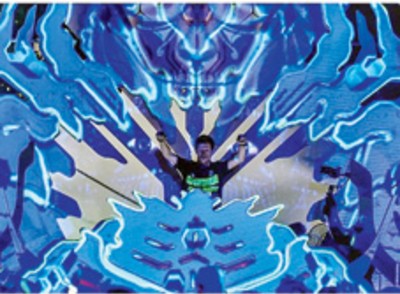 Fungus Funk’s set too was a highly energetic one. The intro to his set was slow and steady but it had a hint of suspense that told you that the set was going to blast, and “a blast” is what happened. His full set has different low-pitched and high-pitched frequencies that were lingering over the beats. Sometimes the build-ups and drop made the audience dance with all energy while some parts of the set helped them regain that lost energy. Fungus Funk or Sergei Prilepa was able to keep the interest alive throughout his set and at least I did not seem to feel lost at any point. 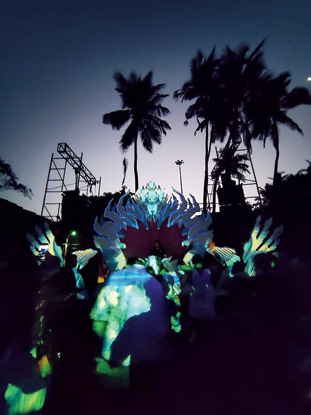 After listening to a night of really high BPM, I thought I would take it down a few notches on my third day at Goa. There was an exciting line-up at Larive Beach Resort on Anjuna and having heard about the place from so many people, I wanted to take a look at it myself.

Wooden flooring, open air and right above the seashore. You could take a nice look around the place given the fact that I was little raised from the ground, You could even walk down to the beach from the venue, which is already a comfortable spot to begin with. On the line-up was Priyanjana (Ghoshal), originally from Calcutta but based in Mumbai, Los Cabra (a Berlin-based producer), Minitech Project (an Amsterdam-based producer) and David Phimister from Goa. 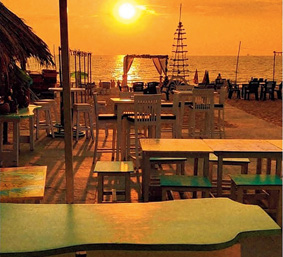 During Priyanjana’s set the crowd was already on the dance floor. Her melodies kept the interest alive and the smooth transitions were unnoticeable. Next up was Los Cabra who was a bit of a tease with the basslines. The way he used effects and timed them on his set created a feeling of excitement. I loved the way he switched between basslines effortlessly and kept the groove alive.

After such a fun night at Larive, a walk on the beach with some grub would have made for a perfect ending. So I rode to Vagator where the plan of a calm walk turned into a mini party. I was caught in the middle of two places that most visitors speak highly of, Curlies and Shiva Valley. Both right next to each other, on the beach, blasting their music. Turns out I was little late for the party as most of the people were gone. So I got myself a Maggi and stood in the middle, trying to figure out which venue I wanted to go to. Curlies, which is a shack done up with wood, two floors with vibrant interiors was playing techno music, which was light, chill, not too hard but enjoyable. On the other hand, Shiva Valley, which is done up with UV lights, portraits of idols with psychedelic art work, was playing full-on psy-trance. Full-on psy packs lesser energy than darkpsy and is mainly identified by it’s uplifting melodies. Going back and forth, I was unable to decide which sound I liked more. 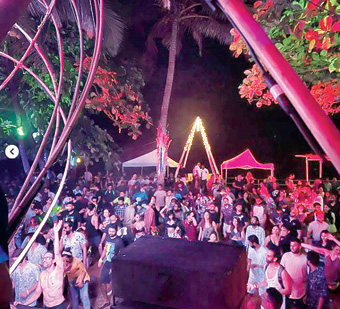 Before heading to Vagator on my trip this time, I got a bite to eat at this beautiful shack in Candolim called Flying Dolphin. After my three-day music-hopping scene, Flying Dolphin is where I came back to, to unwind. The interiors of the shack are bright and done with white and blue, while the tables on the beach make for a great place for an adda session. The staff there are super friendly and I was introduced to the owners, Michaal and his daughters Dolla and Latika… and let’s not forget Rocco, a happy well-built Alsatian to keep you company. The scenes at Flying Dolphin are more about having a good time and conversation with friends, with live music and great food. Sometimes they also host LGBTQIA+ parties. On my first day at Goa, while I was eating my spicy and tangy calamari I got to listen to some live acoustic music where the singer sang numbers like Stairway To Heaven effortlessly. Other than having a friendly environment there, they also help you out with different activities. If one person helped me out with 200 beads of Goan pork sausages, another offered to take me fishing or even do water sports. Flying Dolphin is a great place to unwind after a few intense days. 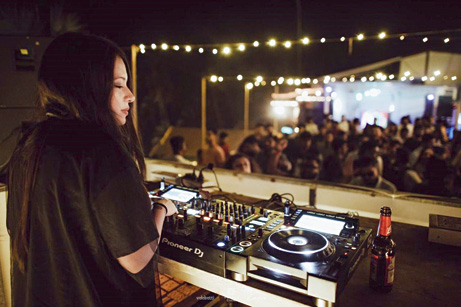 Techno DJ, Priyanjana during one of her sets at Larive Beach Resort

The night before I left I wanted one more night of banging music and word was out that Soro on Vagator was having a good scene… and off I went.

After wrapping up my five days in Goa it was great to see that some of the artistes I had attended had been in Calcutta earlier this year and were also coming down for a gig. For a few years now the techno scene has been booming in Calcutta and although psy-trance has taken a back seat, it is still a big thing outside with international acts flying down to perform. After my trip, Goa, played host to many festivals and acts like Hilltop Goa, which features names like Ace Ventura, Astrix and Greg Hilight, High Tide Festival, which is more techno and electronica and featured names like Dixon, Paji, Undercat and Space Motion. The list goes on and what seems clear is that techno is a genre to stay while psy-trance can be something to build back.