Advertisement
Home / Culture / Dancing to the Tunes of Change

Dancing to the Tunes of Change

The National Tribal Festival in Chhattisgarh highlights the arts, crafts and tourism potential of the state 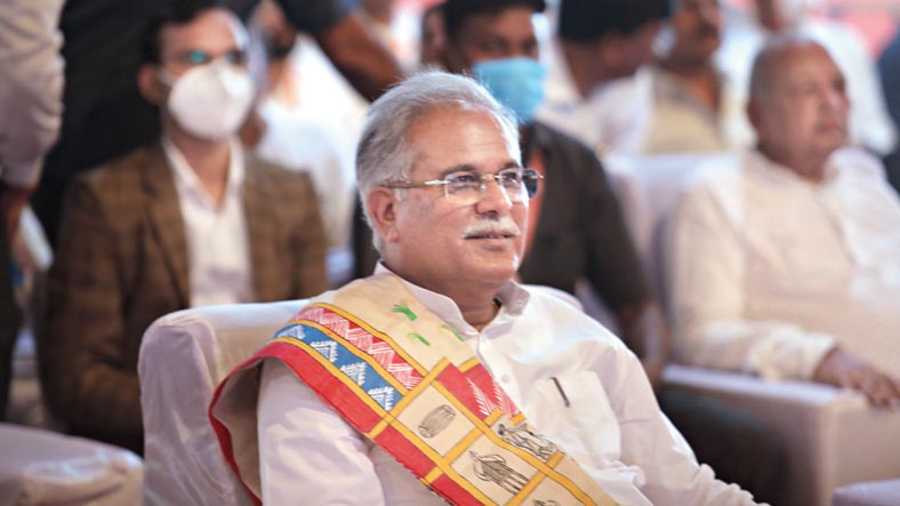 Chhattisgarh chief minister Bhupesh Baghel was enthusiastic about the potential of the festival to promote tourism in the state
Anannya Sarkar   |   Published 07.11.21, 01:49 AM

On the eve of world leaders gathering in Glasgow for COP26 in what is touted as the last ditch effort to save humanity from climate change, a motley crew of journalists, art and culture enthusiasts, members of administration and tribal dancers from 27 Indian states and six union territories gathered in Raipur, Chhattisgarh, for the National Tribal Festival that was held between October 28 and 30.

Organised as an initiative by the Chhattisgarh Tourism Board under the aegis of a government led by Bhupesh Baghel, the festival also saw participation from seven other countries, namely Uzbekistan, Nigeria, Mali, Sri Lanka, the Kingdom of Eswatini (Swaziland), Palestine and Uganda, and was particularly poignant in its expression of the inclusion of and reverence for the tribal ways of life that are historically known for being far-sighted in their ways of living in harmony with nature.

Held at the Science College ground, the tribes dressed in their colourful dance regalia were the centre of attention at the festival that also threw down a gauntlet — a dance competition with Rs 5 lakh, Rs 3 lakh and Rs 2 lakh as prize money for the top three positions.

Outside of the competition, the second edition of this festival (with a hiatus last year due to the pandemic) had the atmosphere of a fair, with stalls showcasing the best of wares by local vendors. That apart, there was a string of talks organised on the sidelines to provide a broader perspective on the preservation of tribal cultures in the fields of art, fashion, food, cinema, photography, social media and administration.

A recurrent theme emerging from all the talks was that of the importance of creating ‘Brand Chhattisgarh’ that would help in furthering the cause of the 21-year-old state to attract more tourism in a sustainable manner. So, while designer David Abraham (one half of the duo of Abraham & Thakore) emphasised the need for the local Kosa and tussores to be championed by the state on a bigger platform, chefs Prateek Sadhu and Manish Mehrotra talked about their introduction to local produce — such as mahua — and how to incorporate them into global dishes.

But Anjuna Dhir, executive director, Responsible Tourism Society of India, reminded us that perhaps it was time to revisit the Indian ethos of ‘atithi devo bhava’ with an infusion of a sense of responsibility to truly help increase tourism in a sustainable manner.

Chhattisgarh, apart from Arunachal Pradesh, is said to be the only state in which the total forest area has increased instead of decreasing and now has 44.21 per cent of its entire area under forest cover. Bastar, which is often called the tribal heartland of India, is a key area of focus for the tourism department of the state as they strive towards making it attractive to outsiders despite the infamy it bears for housing the red corridor.

“Development must come before tourism and the youth has a big role to play in both. We have a number of volunteering programmes for the youth but it is important to note that the youth is not an age but a movement — which is why the youngest volunteer we have is 90 years old,” said Bansal. Homestays, adventure sports and the Bastar Academy of Dance, Art and Language are all part of the state’s long-term efforts to instill ownership, the spirit of development and, thereby, woo tourists to the region.

So when 28-year-old Nisha Bothra of the Bastar-based Ocher Studio said, “I have grown up in Bastar and have never seen a bomb blast or anything like that till now. It’s sad that the violence of certain regions in Bastar is the only news that goes out but people should come and take a look for themselves”, it piqued curiosity about the region so rich in art and craft cultures and traditions.

The willingness of the locals to innovate and contemporise their traditions is manifest in the number of youth-led art studios I came across at the stalls with contemporary iterations in dokra and wood.

The handloom sector in the state seemed to enjoy their backing from the government with a handloom cooperative, amongst others, showcasing their exquisite range of Kosa and tussore saris.

“We recently learnt how to go online with UPI payments and we now do a lot of business over WhatsApp outside of the state too. These help in ensuring continuity for our business, even during the pandemic,” said Raj Kumar Devangan, who runs a shop in Raipur called Kosa Emporium.

Meanwhile, I spotted a couple of women weaving carpets at a stall nearby, alongside another stall with an adolescent boy sitting at the loom. Dexterity of hand and years of craft tradition seem to be an inter-generational thing in Chhattisgarh, with them lacking only on the front of opportunity, which tourism initiatives such as this festival hope to bring them.

Over tea and a vast array of local snacks, we met chief minister Bhupesh Baghel at his house. He was abundant with anecdotes about the state such as those about the famous Dussehra festivities of Bastar and the tradition of stealing the rath. On hearing I was from Calcutta, he brought up the story of Swami Vivekananda’s connection with Chhattisgarh that led the state to even name their airport after the spiritual leader. And outside of the warm reception at the chief minister’s house, he also explained how the state was especially working toward promoting the art and culture of Chhattisgarh to make it more attractive for tourists to come.

“Hope is a very big thing and it is very important that the government of Chhattisgarh has done this because it has provided an impetus to the local artisans and craftsmen and has put out the message that things will be okay and that the state is there with them,” said Yasmin, when I caught up with her at the venue of the festival.

Meanwhile, on the last day of our trip there, we learnt that the teams from Jharkhand, Odisha, Assam and Chhattisgarh won across categories at the competition.