A year since an Indian couple in Berlin had their child taken away by German protection services. The Telegraph talks to them and other parents about a disturbing First World trend 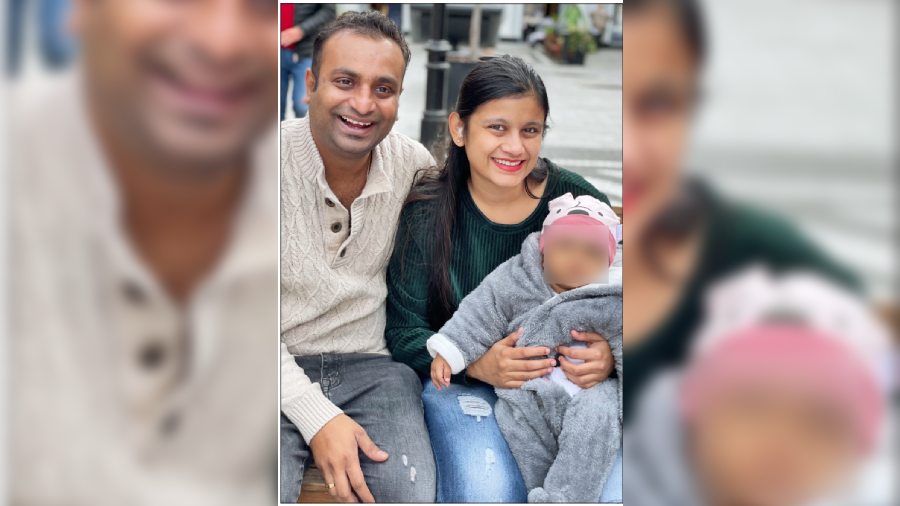 Throw us into jail, but repatriate our child to India,” says Bhavesh Shah. “In any case, without her home is like a jail,” he adds. Bhavesh, a software developer, arrived in Germany in 2018 on a work visa. His wife Dhara delivered a baby girl in February 2021 in Berlin. When the baby was seven months old, she suffered an injury.

What happened thereafter might seem fairly uncomplicated, but in a foreign context, it assumed nightmarish proportions.

On September 23, 2021, the child protection agency made the Shahs sign a document whose contents were in German and, took the baby away. The translator was Urdu-speaking and knew no Gujarati. The Gujarati-speaking Shahs don’t know Urdu. They know Hindi, though not enough to understand legalese.

The incident has since become a legal battle. It transpired that the visiting paternal grandmother had inadvertently caused the injury but was too embarrassed to speak up. The criminal case against the Shahs was closed post-investigation, but the civil custody case is on. In the meantime, somewhere in an undisclosed location, in foster care, their baby has started to walk.

The Shahs have their own set of complaints beginning with the removal of a breastfeeding baby from its mother; of language as a hurdle in communication at every step with every institutional set-up; of decreased frequency of permitted visitations and cultural obdurateness — their request to let the baby be raised on a vegan/vegetarian diet has been ignored.

Dhara has taken up a part-time job to cope with the legal expenses. She has learnt not to cry during visitations or in court. “They cite these to argue I am mentally unstable,” she says. Last week, they were handed a bill of thousands of euros for foster care services.

In a 2020 paper published in Children and Youth Services Review (Volume 119), Hendrik Ronsch of Germany’s Institut Familie, a private research institute for family education and upbringing studies, writes about the German model of “permissive parenting”. Since 2000, the German legal system does not distinguish between “mild customary physical, non-abusive disciplining such as smacks on the bottom” from actual, severe physical violence. Ronsch writes: “German legislation may criminalise parents and according to the European Parliament, (it) breaches fundamental human and parental rights.”

The Shahs were recently summoned for visa renewal and, without seeking their consent, the baby’s passport was taken away. If the baby is out of parental care for a long time, she can be put up for permanent adoption in accordance with the “right to continuity”. There is a chance that a child born to Indian citizens will grow up in a foreign country as if it were an orphan.

“This (child removal) happens if you have a child too young to talk,” says Debashish Saha. It was 10 days since he, an IT professional, and his wife had arrived in New Jersey in the US, with their one-year-old boy. The child suffered a head injury and the parents took it to a hospital, which quietly alerted child protection. This was 2012.

Debashish says, “We didn’t even know terms like ‘shaken-baby syndrome’ or what a child protection service does.”

Germany has a legal system driven by formal rules and yet no one told the Shahs about their legal rights even as their baby was being taken away. Just the day before the Sahas’ little boy was to be discharged from the hospital, Debashish was asked to appear in court. “I was more excited about having my son home after 20 days. I did not even have a lawyer to represent me. Child protection petitioned and got permission to move the child from the hospital into their custody,” says Debasish, who is now based in Calcutta.

In the case of the Sahas, language was not a barrier but language alone cannot communicate culture. Child protection focussed on the fact that theirs was an arranged marriage and they were, therefore, little known to one another. This argument would at some point have dovetailed into the blame game; Debashish says child protection typically plays to turn one parent against another.

What does child protection in any country achieve by any of this? “The fault is in the design of it,” says Suranya Aiyar, lawyer and activist who has been helping such families pro bono for the last 10 years.

Says Aiyar, “It is set up to surveil families through state schools, hospitals and welfare agencies, and to confiscate children, if required. The assumption is that family is a place of hidden abuse of the child. An elaborate state machinery is set up to place such children in foster care or adoption. Over time, the threshold for intervention falls and the amount of money budgeted for child services goes up per child. Social workers act as police and judge for all practical purposes and judges tend to rubber stamp their decisions. Those targeted tend not to have the wherewithal to fight a complex legal battle. The system goes after the poor, the unemployed, isolated single mothers and newly arrived immigrants. It is an Orwellian nightmare.”

Sagarika Chakraborty’s case from 2011 was perhaps the first such to get media attention in India. Those days, Sagarika (then Bhattacharya) — she now lives and works in the National Capital Region — was living in Norway with her husband and two young children, a five-month-old girl and a two-and-a-half-year-old boy.

The boy was beginning to show signs of what was perhaps a behavioural disorder typical to early childhood. Same old story. The kindergarten teachers noticed and alerted child protection, which sent two observers to the Bhattacharya residence. The observers were delegated to help the young mother. Instead, they took notes for days on end and even made racist slurs. Then, one day, both children were taken away, suddenly and without explanation.

Here, too, child protection played one parent against another, promised one custody instead of the other and succeeded. Sagarika has written the traumatic details in her book The Journey Of A Mother. The screen adaptation, Mrs Chatterjee Vs Norway, with Rani Mukherji playing the lead, will hit the theatres this year.

A 2020 report published on the Norwegian National Human Rights Institution website states that in recent years, the European Court of Human Rights has accepted 39 cases involving the Norwegian Child Welfare Services for hearing. It says, “Of the nine cases the Court has ruled on, a violation of the right to family life has been found in seven cases.”

Sagarika was united with her children after two years. The Sahas waited five months. Away in foster care, the Shahs’ little girl has started talking, but in German.

Dhara says, “Don’t believe us. Punish us if we are guilty. But please let our baby go home to India before it is too late.”

Off the Kin Ship

The queen who set in motion an epic