Advertisement
Home / Culture / Chef Suman Chakraborty sets out on a trip across Bengal in search of its hidden gems — Mishti!

Chef Suman Chakraborty sets out on a trip across Bengal in search of its hidden gems — Mishti!

Rice, fish, mustard oil and sweets are an integral part of Bengali food and culture, complemented by poetry, music and adda. I have always wanted to explore my state to the fullest and having just started on it, I’m surprised that there is a lot more to it than I had expected. My journey began in the 24 Parganas and ended in Dinajpur, and the focus was on finding out more about Bengal’s sweet tooth. 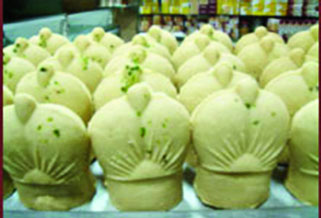 Rice, fish, mustard oil and sweets are an integral part of Bengali food and culture, complemented by poetry, music and adda. I have always wanted to explore my state to the fullest and having just started on it, I’m surprised that there is a lot more to it than I had expected. My journey began in the 24 Parganas and ended in Dinajpur, and the focus was on finding out more about Bengal’s sweet tooth.

My intention behind going to Chandernagore was to gather information on the influence of the French on the local cuisine, but I understood soon that the French are long gone and so is much of their legacy. Folklore has it that 150 years ago, a certain zamindar’s wife in Chandernagore’s Telinipara had instructed a sweet be developed that would unsettle her would-be son-in-law once he eats it, making for a humorous marriage function. The sweet was invented in the shape of edible jelly seeds of the palm fruit, filled with rose-flavoured sugar and jaggery syrup. The sandesh did the trick of deceiving the groom and was also the talk of the town.

The sandesh is primarily made of chhana and shaped as the palm fruit’s edible seed; it has a rich taste. Upon breaking, the fluid (nolen gur in winter) flows out, surprising you as promised — a must-try if you are in Chandernagore.

In Bengal, where the love for sugar is hardwired in the DNA, quality ingredients are a must. During the British Raj, innovation was encouraged when it came to making sweets. The shorbhaja is one dessert from the Bengali repertoire where chhana does not play a major role. It is made with the cream of reduced milk, flavoured with green cardamom and enriched by almonds and cashew nuts. It is then shaped into squares and fried. Adhar Chandra Das & Sons (Kuri) is a 115-year-old sweet shop in Nederpara of Krishnagar that makes the best shorbhaja.

My quest for nawabi recipes took me to Murshidabad. My finding — a delicious sweet meat made from freshly-made cottage cheese, deep-fried and soaked in sugar syrup. This dessert is available throughout the district, be it Lalbagh, Behrampore or Cossimbazar. To give this sweet a try at home, knead 200g of chhana (fresh, unripened curd cheese), 15g of refined flour and rice flour each, and make them into small balls. Fry in clarified butter and soak in sugar syrup flavoured with cardamom.

A small town in the district of Burdwan, Shaktigarh is known for its langcha, made from chhana and khoya. The origin of the sweet is unknown, though some claim that it is from Krishnagar and eventually made its way to Burdwan.
To make it at home, the following tried-and-tested recipe can be given a go: chhana 200g, khoya 100g, sugar 50g (for the mixture and 500g for syrup), water 1 litre, maida or refined flour 50g, elaichi powder 2g to 5g, a pinch of baking powder, 50ml of ghee or oil to fry.

Knead the chhana and khoya with sugar and add maida to it. Add elaichi powder and knead till desired; it should not stick to your palms. Divide the dough into small portions, hand-press each portion into langcha-like shapes and fry till brown. Transfer the langchas to the sugar syrup.

Foodlore has it that this sweet was first prepared by Bhairav Chandra Nag, a local sweet maker, for Lord Curzon when he came to confer the title of Maharaja on the king of Burdwan. The ingredients include kaminibhog rice powder, gobindobhog rice powder, basmati rice powder, gram flour, saffron and sugar. The mix is poured into hot ghee through a brass ladle with fine holes. The deep-fried saffron grains are then dunked in sugar syrup and strained.

Dinajpur is close to Jharkhand and is in the northern part of Bengal. The rasakadamba made here is a special round syrup-filled dumpling covered with kheer and coated with moderately roasted poppy seeds, and is slightly on the sweeter side. Ranaghat was also a stop on my culinary journey to Nadia district. Here, Jagu Moira’s pantua is really worth a mention. It is made of semolina, channa, milk, ghee and sugar syrup. Cardamom is used as a flavouring agent.

Malda is famous for its mangoes and is a major connecting link between north and south Bengal. Kansat is a lesser known sweet in other parts of Bengal and also to the rest of India, having the base of small cylindrical, poached chhana dumplings, covered with a grainy texture of khoya kheer. The dessert is an amalgamation of chhana and khoya. The sweetness of this dessert isn’t overwhelming and what really gives it the distinction is the milky aroma of the grainy kheer, which envelops the dunken dumpling.

On the western bank of the Bhagirathi river is the newly formed island of Nabadwip. Vegetarianism is at its best in this part of Bengal. Panchu’s 150-year-old Lakkhi Narayan Mistanna Bhandar perhaps sets the best kheer doi in town. The production process is unique. In the afternoon, the milk is put on range for slow simmering. After six hours, when the milk reduces to a considerable amount, it is taken out and sugar is added to it and then left for slow simmering for the entire night. Early in the morning, it is taken out and poured into earthenware curd containers. There is a special process that involves arranging and shifting the containers from time to time. It takes two to three days to set and without refrigeration, it has a shelf-life of almost 10 days.