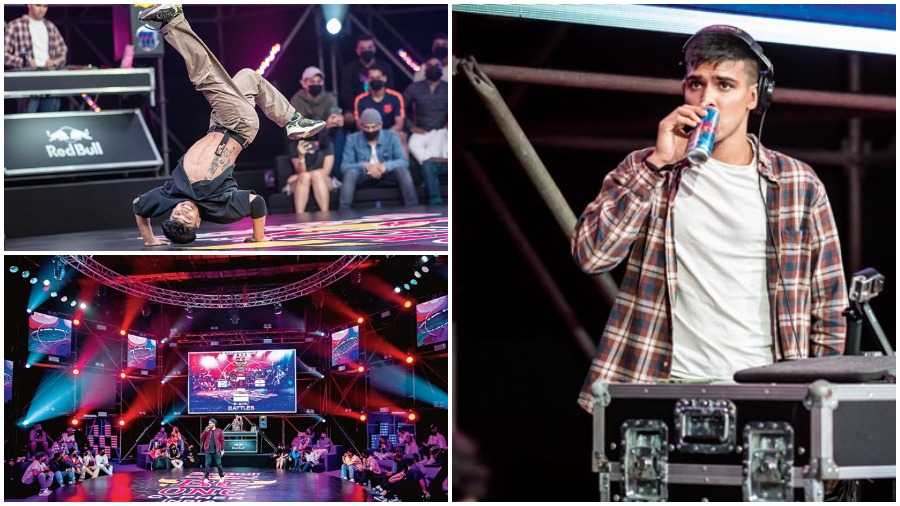 The Indian hip-hop dance community has been growing at a steady pace over the past few years and with a platform like Red Bull BC One, the community has been making a mark on the global map. Famous Studios in Mahalaxmi, Mumbai, played host to the sixth edition of Red Bull BC One Cypher India 2021, on September 4, where the best b-boys and b-girls gathered from around the country and battled it out over numerous rounds of breakdancing.

Over the past two months, all the qualifiers were chosen digitally from their Instagram feeds. The breakers were to upload a snippet of their moves, tag @redbullindia and use the competition hashtag #REDBULLBCONEIND21. From there, 16 b-boys and four b-girls were selected to battle it out before a live audience, something that happened after two years. Phew!

The winners? B-boy Wildchild from Mumbai and b-girl Jo from Bengaluru. This was Wildchild’s first win ever at Red Bull BC One while b-girl Jo defended her winning title. The two winners will now travel to Gdansk, Poland, to represent the country at the 18th Red Bull BC One World Final, to be held over two days, on November 5 and 6.

Keeping in mind the pandemic, the organisers had taken necessary measures to ensure safety of the participants and the audience. An RT-PCR report was to be submitted 72 hours before the event and upon arrival, an antigen test was required. Members in the audience were given masks and were asked not to take them off unless absolutely required. The audience was also seated around the dance floor where the action took place, all socially-distanced, giving the breakers ample space to move around. The judges of the event were Red Bull BC One All Stars b-boy Wing from South Korea, b-boy Junior from France and b-girl Sarah Bee also from France. They were present but virtually. A live recording of the event was also made so that hip-hop lovers can view the same sitting at home on Red Bull TV and YouTube. Only t2 took a seat in the audience.

Emotional moment: After years of practice, b-boy Wildchild finally won the Red Bull BC One Cypher India 2021. It was an emotional moment for him as he dedicated his win to his father and gave him a kiss towards the sky. During the finals, Wildchild was up against b-boy Flying Machine from Mumbai, who is said to be one of the biggest names in the industry. The battle was a close one but the two played it cool with small jokes. “I say, the timing is perfect and there was a purpose behind my waiting — in previous years, the time was not mine, however, this is now my time to shine. I’m very excited to now represent India at the Last Chance Cypher at the Red Bull BC One World final,” said Wildchild.

Happy vibes: Defending the winning title can be tough but b-girl Jo did it with smiles and sass. Not only was she smiling from ear-to-ear when she was announced the winner, she kept up that happy vibe going through her moves. In the final round against b-girl Pace, the two battled it out with freezes, stunts and footwork and ended the battle with a friendly hug. “During the second lockdown, I took time to build my training holistically. I kept my nutrition clean, practiced yoga to retain mental and emotional health and I put in long hours of training, even though there was no announcement of any upcoming jam. I did it for my own growth as a breaker. I’m so excited to win my second Red Bull BC One Cypher India title, and to now travel to another country for the world final. It’s going to be a new experience and I’m happy I took my journey seriously this year,” said Jo.

Both b-boy Flying Machine and b-girl Pace had put their best foot forward. While Flying Machine was the defending champion from 2019, Pace was just a small step away from bagging the winning title. “I could have won it again and that would have been the fourth time taking home the title, but I did what it took to stand till the finals. I saw the title slipping away in front of my eyes; I was a little hurt but it felt good to see Wildchild take it... more than anybody else. But I feel like I’ve been born again and the journey has just started. I’m making sure that I won’t let it get away easily the next time,” said Flying Machine.

“I am proud of myself; I have been breaking since 2018. And in such a short time I have been selected twice for Red Bull BC One. I am happy with my performance, for I was prepared. Jo is one of the strongest b-girls in India and to battle her was a great experience. I wish her all the best in Poland,” said b-girl Pace.

(Clockwise from top)  The judges of the event were b-boy Wing from South Korea, b-boy Junior from France and b-girl Sarah Bee. They are all members of Red Bull BC One All Stars and were present to judge the show virtually. They were also the judges in the digital selection round of the event.

To give breakers rhythm and an upbeat vibe, DJ Cosmic took charge of the console with some hip-hop beats.

The stage was the primary focus and a socially-distanced audience sat around it. The organisers had taken a lot of safety measures and emcee Nishit was in charge of keeping the energy alive.

Besides dancing: Skateboarding and rapping

After two years you finally won Red Bull BC One. How does it feel?

I’m feeling very excited and happy. After losing twice in the finals, back-to-back... this year, I knew the title was mine.

You dedicated the win to your father. How did your family react to your success?

It was not a big deal for me to win this trophy as I was ready for it and had trained hard for it. I lost my father last year and he wanted to see me win this title. After my father passed away, I made up my mind to make him proud. My family members are very happy about the win.

How long have you been practicing?

I was practising very hard and I always train hard because you never know what will come next. During the lockdown I came up with new moves and styles.

Your next stop is Poland. Plans?

I’m planning to stay longer and get down to another jam for a new experience.

A message for budding dancers?

Just don’t give up; there is hope and, most importantly, believe in yourself. Believe in God and train hard. And have fun.

A project you would like to feature in: Collaborate with b-boy LilZoo and b-boy The Wolfer.

Biggest inspiration: My problems; I’m inspired by my problems.

Describe your way of dancing in one word: ‘Wild’, like my name.

Is it tough to defend the winning title?

Personally, it was my turn with there being a two-year gap. I didn’t know what to expect... really.

What did you think about b-girl Pace’s performance during the final round?

It was really good. She was really dynamic and I felt that the level of competition was high this year. It was a good experience.

How did you keep in shape these last two years?

I started doing yoga at a very young age and I get back to it after dancing. And also breaking is my gym-time for the body, so I started to turn towards yoga to help with that. I also do breath-related exercises to stay calm and focused.

What do you plan to do in Poland?

I’m definitely going all-out for the competition. The weather is very cold, so I don’t know what to expect. It will be a new experience.

A message for budding dancers?

You also give yoga classes, right?

Yes, now I am doing it online but I will be starting my studio again in Bangalore.

A project you would like to feature in: It would be cool to have a hip-hop project, like Indian hip-hop with women, b-boys and rappers.

A milestone: This win.