Whole numbers and Half Truths is a journalist’s attempt to look beyond views, and do some serious myth-busting in the realm of data 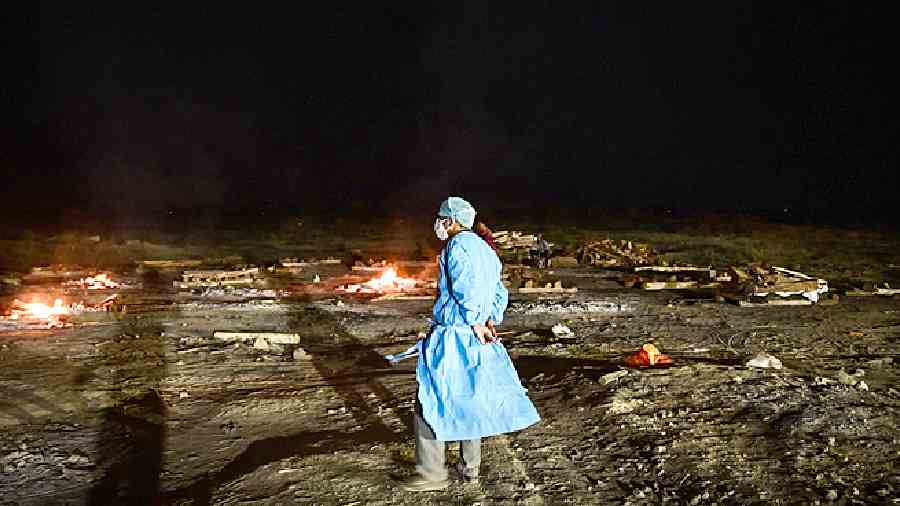 Coterminous with the chilling and insensitive nature of political apathy and the absence of healthcare infrastructure, the missing data succeed in hitting home the realisation: “India undercounts all deaths.”
Telegraph Picture
Deeptanil Ray   |   Published 27.05.22, 02:41 AM

Books: Whole Numbers and Half Truths: What Data Can And Cannot Tell Us About Modern India

Data, or their absence — in the times of search engines and teleprompters, communication overload, and electronic echo chambers of hysteria and high culture — can sometimes indicate what is wrong with the views we hold to our hearts about Indian society at large. These views are sometimes prejudices; at other times strategies of avoidance and evasion, if not the denial of reality; occasioned by State policies, fluctuations of social memory as well as acts of individual forgetting, they prevent us from comprehending society outside the bubbles that we live in. This book is a journalist’s attempt to look beyond views, and do some serious myth-busting in the realm of data — in the sense of what already exists out there as “hard facts” about Indian society in official records and reputable research findings of the last few years.

If the available figures are at all to be believed, argues Rukmini, we are in the middle of a frighteningly real information crisis, one that is worsened by a near-total absence of information on what is happening in the first place. This absence is less understood through blanket denial of all data, or the constant juggling of terms like ‘data opacity’, ‘data denial’, and ‘data paucity’ in television studios. Rather, there lies the need to understand why the available data were compiled, the actual complexities of compiling, and what insights those raw data can or cannot provide.

Consider the fact that India’s only source of statistical data on crime is the report compiled annually by the National Crime Records Bureau based on first information reports filed in police stations across the country. If journalists and politicians blindly cite NCRB data, they are in the realm of the unreal, explains Rukmini. The NCRB’s process of data compilation follows the “principal offence rule”, according to which the bureau circumspectly selects the “most heinous” crime from each FIR to prevent “artificially inflated” crime statistics. This rule sets the grounds for serious omission: for example, the violence perpetrated against Nirbhaya in Delhi during 2012, “only made it to the NCRB statistics as a murder, and not as a sexual assault, because murder carries the maximum penalty”. Similarly, the absence of penal sections under the law ensures that mob lynchings and hate crimes in India never get recorded at all. Rukmini’s sampling of the nearly 600 court cases of 2013 reveals another complexity unidentifiable in crime data: the greatest number of reported sexual assaults in FIRs concerned consensual relationships, usually inter-caste marriages criminalised by parents and the police.

The book draws you in, slowly, as it lays bare a wide array of numbers and percentages, while also explaining the sheer lack of information about the real state of elections, jobs, population growth, urbanisation, migration, healthcare, and death in contemporary India. Reliable figures about poverty and unemployment are for long non-existent, Rukmini observes, because statistical estimations through national household surveys have been severely downplayed at the level of policy since 2014. Even with available data, classificatory schema can befuddle understanding: Code 121 of the National Classification of Occupations lists unstable, small, one-person enterprises under “Directors and Chief Executives” — the principal occupation of urban men and the third most common occupation of urban women in India (who are not domestic cleaners and garment workers).

Data, however, reveal that you or your next-door uncle who delights in revelations shared on WhatsApp certainly do not belong to the “middle class” — a spending routine of more than Rs 8,500 per month finds you in the top five per cent of urban India. Outside the 298 urban agglomerations, 52 megacities and around 8,000 towns that officially make up urban India, there exist 600,000 villages. With sixty-nine out of every hundred Indians living in villages, India’s population is still predominantly rural. In 2019, India still had the greatest number of undernourished children in the world.

By the time the book proceeds to take stock of death and mortality in India, an overwhelming account of “undercounting” adds to the poignancy of numbers. Even before the pandemic, only 22 per cent of nationally registered deaths were medically certified, mostly in urban areas, and for people who could make it to the hospitals. In the summer of 2021, there were bodies waiting outside most urban crematoria, or blazing across make-shift funeral pyres in the villages. And as the corpses floated down rivers in silence, India remained a statistical outlier in global mortality indices. Coterminous with the chilling and insensitive nature of political apathy and the absence of healthcare infrastructure, the missing data succeed in hitting home the realisation: “India undercounts all deaths.”

Probably this book will be ignored. But for those who want to understand India’s strange data architecture or think about what missing data can tell about us as a society, Whole Numbers might serve as a good starting point.