Sobhanlal Datta Gupta examines several themes in Nikolai Bukharin's work, trying to place his writings within the wider context of his evolution as a Marxist thinker after the Russian revolution 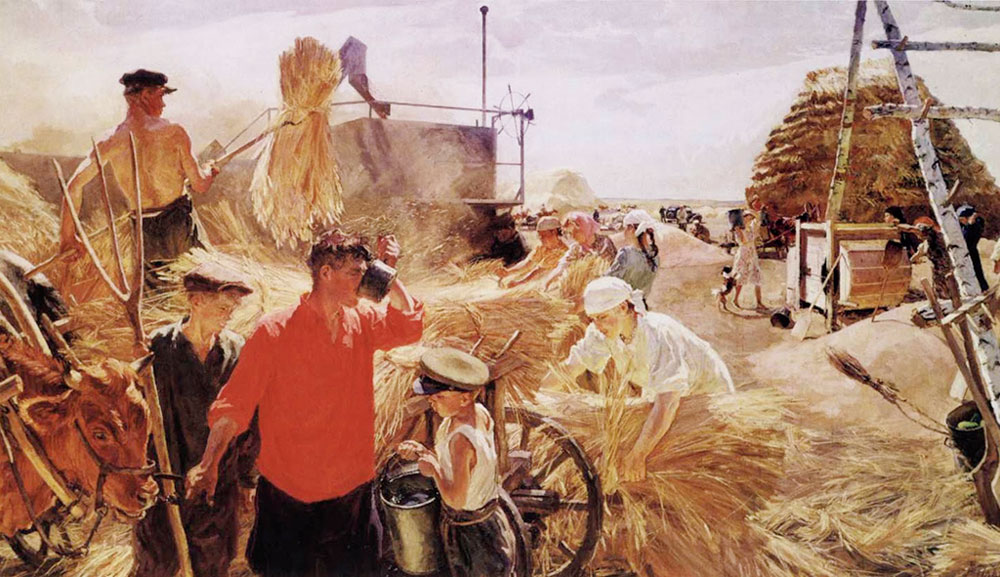 Threshing at the Collective Farm, a painting by Arkady Plastov representing the agricultural collectivisation that drove a wedge between Stalin and Bukharin
Wikimedia Commons
Kunal Chattopadhyay   |   Published 19.04.19, 06:39 AM

The collapse of the USSR resulted in, among other things, a resurfacing of critical studies of Marxism going beyond the Cold War polarities. One part of that was a recovery of the wide spectrum within revolutionary Marxism that had been flattened into the correct line versus the class traitors and deviationists under Stalinism and its kin elsewhere. Sobhanlal Datta Gupta has been one of the few Indian scholars seriously engaged in this project. The book under review is part of a series of studies he has been publishing. In it, he attempts to summarise a considerable body of work on Nikolai Ivanovich Bukharin. He also tries to examine several themes in Bukharin’s work, trying to place the last period of his writings within the wider context of his evolution as a Marxist thinker after the Russian revolution, and focusing mainly on the issues of socialist construction, and culture and philosophy.

Unlike many of the other figures whom Western Marxism has sought to appropriate, Bukharin was part of the Bolshevik leadership. This means that he had practical experience of the attempt to build socialism, and therefore, his views and his criticisms, have to be seen as an insider’s writings, and as writings that take practical issues seriously into account. Stephen Cohen’s biography of Bukharin, especially his response to Marcel Liebman’s review of his book, argued that Bukharin represented, more than Trotsky, a set of alternatives. Datta Gupta’s study of Bukharin and the way he presents the recovery of Bukharin suggests a more complex picture. Bukharin shared with Lenin and Trotsky the vision of a working class revolution, the rule of the proletariat, and a transition to a communist society where the market would be overcome. This was why Bukharin is not a forerunner of so-called market socialism. But where Bukharin’s socialist humanism stumbled, and where Datta Gupta’s analysis stumbles, is in the assumption that Stalinism was another (albeit harsher) route to socialism. That it was a distinct social group which had seized power (debates continue about whether it was a class or not, and what the economic mechanisms were) has to be recognised. Those who remained trapped within the framework of building socialism in one country and a one-party regime, could not see the transformation. This was why, even when Bukharin was to become a dissident, he would go on working for the Stalinist regime.

But that he could not be rehabilitated after 1956 shows that his ideas did retain a sting. It would be in 1988, the year of his centenary and into Perestroika and glasnost that he would be rehabilitated in the USSR. Contrary to the official Soviet writings of that era, however, serious studies showed that Bukharin cannot be regarded as the intellectual antecedent of Gorbachev. One needs to look at the actual texts of the Bukharin-Preobrazhensky-Trotsky debates of the 1920s. They all agreed that there was a need to move from the New Economic Policy to socialism. Datta Gupta does not bring in that debate. But his examination of Bukharin’s writings, in fact, show that Bukharin seems to have believed the ultra-left defence of War Communism (Trotsky’s writings of 1919-20 show a far less confidence in War Communism, contrary to the image created by Deutscher). Lars Lih claims that Bukharin never abandoned the spirit and rationale of War Communism.

Datta Gupta discusses, in two very interesting chapters, Bukharin’s writings on culture and philosophy. Bukharin supported the Proletkult current in the early years of the revolution. However, the post-1921 evolution of Bukharin showed several stages. In 1922, he argued that the resolution of cultural and educational programmes was most urgent. But Datta Gupta’s claim that this put him in opposition to Trotsky is doubtful. Between 1922 and 1926 Trotsky would write a series of essays stressing the need to integrate a cultural revolution with economic transformation. As the toleration of the 1920s gave way to a dogmatic Socialist Realism in the 1930s, Bukharin attempted a softer line. His report on poetry and poetics at the Writers’ Congress distinguished between natural and human sciences, and stressed the need for an ontological hermeneutics. A secret report of the People’s Commissariat for Internal Affairs looked at his critical views of contemporary Soviet poets. He called for diversity, opposed undifferentiated unity. He would do this again when he looked at fascism and culture.

Bukharin’s writings on philosophy are also treated, along with a consideration of the views of Lenin, Gramsci and Lukács on Bukharin’s philosophical positions. Gramsci provided a sustained critique of Historical Materialism. Bukharin’s re-reading of Lenin, Datta Gupta suggests, was a major factor in his shift to a more dialectical stance in the 1930s. The very brief treatment of the Philosophical Arabesques, however, is not very satisfactory. As an introduction to a complex subject, Datta Gupta has attempted to generate interest. But the simultaneous attempt to look at the wide range of studies on Bukharin as well as to look at Bukharin’s own writings all within the scope of such a brief text at times creates problems for the unwary reader.

Bukharin as a dissident remained trapped, because he could never think of a revolutionary overthrow of the bureaucratic regime. Datta Gupta is too scrupulous a scholar not to notice this. Hence he ends by suggesting that because Bukharin did not call for a direct attack on the regime, his critique remains an incomplete one capable of creating confusion.