The lights of Ghosh mansion

A serial novel; The Romantics of College Street 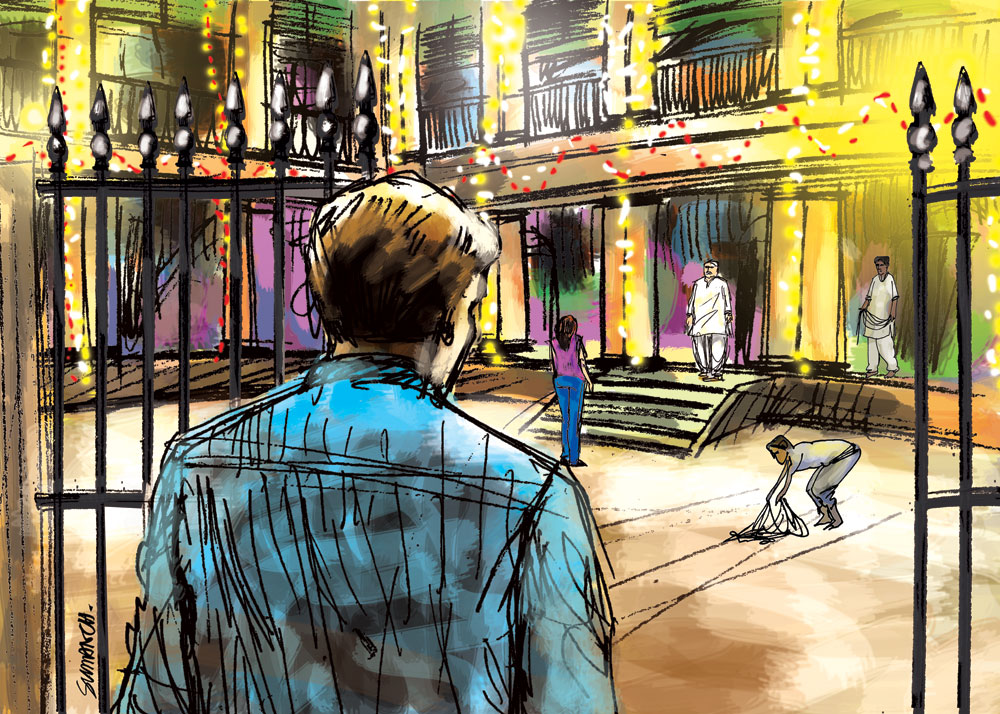 Recap: Lata and Ronny’s chance meeting at the tearoom leads to catching up and conversation. But why is Bobby Bansal, the unwitting architect of this encounter, so annoyed?

It took exactly five minutes for the tea to turn cold in the flowery porcelain cups and a further five to discuss the liaison-officering. Bobby had, in anticipation of this meeting, created a spreadsheet with the various functions leading up to the wedding, marking up dates, timings, important phone numbers, even going on to anticipate possible hiccups.

Lata, feeling weirdly naked without spectacles or lenses, squinted at the sudden multiplication of screens in front of her, trying hard to pay attention but feeling somehow hollow and vague inside, as though there were a faint ringing in her ears.

The plates and cups were cleared away. Bobby stood up and dusted off crumbs from her clothes. Following suit, Ronny and Lata stood up and filed out of the tearoom behind her.

“I guess I will speak to you tomorrow and see you at the ashirbad?” Bobby said. She added, slightly apologetically now, “Really have to run. I’ve had to park two streets away, and we must get to this meeting by 5.45.... Ronnyda?”

But Ronny was looking away. Into the traffic that flowed past. In the buildings across the street, men stood in balconies and sleepy women picked laundry off nylon lines that had been strung across the grilles.

“Where are you going?” Ronny asked Lata.

“I will go home,” Lata replied, “There are wedding things to do.”

“Bobby,” he said, measuring his words, “I think you should meet them by yourself. I might lose my temper — and that’s going to make things worse. I have to go towards the north anyway. So I’ll head in that direction with Lata. You don’t mind, do you?”

“Well then,” she said, her lips tight. She turned to Lata, “Tell Molly not to worry. Bye.”

In a flash, she had turned. As she crossed the road, her flying mass of hair caught the parting sun. Soon, Bobby had disappeared into the traffic and, in a while, the lingering traces of her displeasure began to dissipate too.

“She is quite dazzling, really,” Lata smiled, “You are lucky to have someone like that looking out for you.” Lata rested her palms on the iron railing that separated the pavement from the street.

Unconsciously, Ronny mirrored her pose. But it was only for a moment or two. Then he leaned forward and gently rested his elbows on the warm metal.

The silence swelled between them. It was not quite a companionable silence, the kind that sat between some married couples or many young children with iPads and their loving grandparents. But neither was it loaded with the weight of the past. It was breezy, quiescent, almost like the dusk that was waiting in the wings of the yet-blue sky.

The years that had gone by gently collapsed into one long absence and, then, as the minutes ticked by and the scent of the city went to their heads, into one long season, so that, almost counter-intuitively, now that the season was over they could become more like their old selves. The men in the shirtsleeves withdrew from the balconies across and returned with cups of tea; their wives had disappeared with the armloads of clean dry laundry that smelt of flowers.

“Manjulika Ghosh will be happy to see you,” Lata said, finally. “She has been following your career closely.”

And your love life, she was going to add. But then she didn’t. Let Manjulika Ghosh do the asking. Lata was not going to bring up Pragya Paramita Sen.

(Unless, of course, Ronny said something about relationships in general and she felt the need to respond in a casual, don’t-give-a-tiny-rat’s-ass kind of way.

“You’re being very extra,” she could hear Aaduri in her head. “Calm down.”

“I don’t understand this usage. What is ‘extra’?” Lata had asked Aaduri. “It’s what your generation calls OTT.”

“Oh, and suddenly you’re a different generation?” Lata had rolled her eyes.

“Yes. My target readership and I are one now. It’s a kind of communing.”)

“Let me call a cab,” Ronny said. “We really should get one,” Lata agreed.

But neither of them pulled out their phones. They continued to stand by the railing, unmoving, until the street lights began to glow, and the crowd at the tearoom reached such proportions that people congealed around them, noisy young people, full of young people problems they needed to discuss loudly. The years that had collapsed now began to right themselves. And when a few phones flashed in their faces — Lata realised Ronny had been recognised — they walked up ahead. Eventually, a cab was found.

“Do you still read as much?” Lata finally asked. “In the early days in England, I used to think of you when I went to bookstores.”

“Not as much as I used to,” Ronny confessed. “I read a lot of things online these days. Twitter’s great. If you follow the right people, there are all these fascinating links that show up.”

“Twitter is vile and people are nasty and nobody actually reads anything anyone shares!”

Ronny looked at her. Her eyes were dancing with mirth. “I thought you lived with the guy who ran Twitter in the UK?”

“Stalking me, have you?”

“Only sometimes, when I am down and out and miserable. And, then I go to Facebook and see everyone through their shiny filters.”

“Well, then you shouldn’t have been so high-minded and pursued art. Like the rest of us, you should have sold out, left Calcutta and put your economics degree to good use. But then again, who would have made those films? Don’t flatter yourself. I’m not saying there’s a dearth of good filmmakers. But others would have made other films. How would some of my secrets be immortalised?”

“Netflix. I’ll have you know I liked the children’s one better. The other one, I found her — what was her name? — quite irritating.”

“Though I did run away to Goa when I was 15 and hung out with hippies on the beach. Like Manjari.”

“And you did walk home from Presidency because you spent all your money buying that fat Vogue book but didn’t want to borrow 10 bucks from me.”

“We’d fought, my friend. I was storming off. You don’t ruin that by coming back for 10 bucks. Unless it’s a sitcom and I do not like sitcoms. I thought you portrayed that bit rather well. College Street, in memories. You made changes though. The collector’s edition Vogue became a first edition Tolstoy. Why? Vogue too declasse for your Manjari? And Manjari walked to Gariahat!”

“Not very dramatic, walking to Bagbazar from College Street.”

“And that’s my phone,” Lata said, waving her hands to explain the sudden music that had filled the cab. “Hey Molly. I’m on my way. Calm down, sweetie, calm down.” She put her phone away after further commiserating.

“Not sure. I couldn’t hear her through the sobbing. But I presume it’s something highly minor. Wedding nerves.”

And then, Ronny’s phone rang. It was Pragya. The conversation went on for a while. Lata pretended to look out of the window, then began to give directions to the cabbie.

By the time the cab drew to a halt in front of Ghosh Mansion and Ronny had to wind up the conversation with Pragya, he realised that this whole detour was a bad idea. He had promised to have dinner with Pragya at home tonight — her mother was still in Ranchi — and what was he thinking, sending Bobby off to such an important meeting by herself at such short notice?

Lata was the first to alight.

“If you are practising your

Hindi for the sangeet, then maybe you should practise the next few lines,” Lata twinkled. “After the aiye aiye bit.”

Ronny walked up and shook his hand. Ghosh Mansion was glittering with tiny golden lights. The last time he’d been here, it had looked precisely the same. (In fact, the Ghoshes had probably used the same damn decorator.) It was the night before Lata’s wedding to Aarjoe.