Advertisement
Home / Culture / Books / The Emergency: past as the present

The authors argue that Mrs Gandhi lifted the Emergency at her own choosing ... For our contemporary times, these lessons of history presented in India’s First Dictatorship must be revisited and analysed 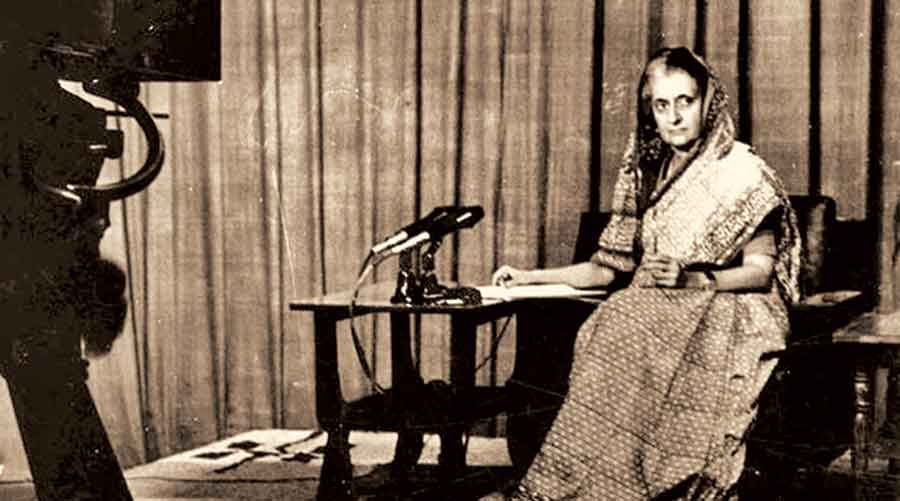 Christophe Jaffrelot and Pratinav Anil’s India’s First Dictatorship: The Emergency, 1975-1977 has an interesting back story. First conceived in the late 1990s by Jaffrelot and his publisher, the book was shelved, among other reasons, because the “interviews around which the book was supposed to be built appeared unreliable”. The project was revived and reshaped by the two authors only after the Shah Commission transcripts became available. For this reviewer, the biography of the book offers a cautionary tale regarding the limits of popular retellings, which seek to explain the historical significance of the Emergency regime through personality-driven recollections, tyrannical or otherwise.

To be sure, several scholars, beginning with David Selbourne in 1977, have addressed diverse issues of politics and polity of the era, but the enigma of the Emergency exceeds its historiography. Even today, questions concerning the Emergency’s status within democracy, its relations with people’s rights, or its role in the rise of the Right continue to provoke. The complexity of the Emergency goes beyond commonplace binaries as the myth of the ‘strong leader’ was not only enacted by willing aides but also secured by the compromises struck by ambiguous and anxious opponents. Also, much remains to be told about the Emergency’s afterlife, especially of the conditions which could portend its possible return. For these reasons and more, the arguments presented in India’s First Dictatorship have been worth the wait as they offer a comprehensive account of the regime’s character and its consequences.

Of the three sections in the book, the first presents facets of the Emergency’s authoritarian regime drawn from Juan Linz’s typologies. Since many of the features of the era are reasonably well-known, especially the roles that individuals and parties played or the ways in which institutions were subverted, only a few are discussed here. In one of the early chapters, the authors attend to the significance of populism within authoritarian regimes. Reviewing the populist measures of the period, they argue that the pro-people schemes and policies were deployed not to further a socialist ideology but to camouflage the regime’s corporate interests, which manifested themselves in an all-out attack on labour. As the authors say, the Twenty Point program was “Janus like” as the majority of the points seemingly promoted people’s welfare, whilst the remaining few “worked mostly to the benefit of the industrialists and the middleclass”.

The absence of ideology in the two ‘isms’, populism and authoritarianism, helped preserve the status quo in the face of an open class war that the regime waged against the poor. And, since Mrs Gandhi justified the regime in terms of defending the nation, the focus on fear and nationalism assumed the place and power of ideology and was responsible for the inevitable depoliticization of the polity. Concluding their discussion on the character of the regime, the authors argue that it was neither singular nor cohesive. The “unevenness” was spatially spread as the “footprint” of tyranny was most intense in Delhi and the Hindi-centric regions and less so as one went further, politically and geographically. There is a lesson to be learnt here: despite the presence of the “uneven impact of authoritarianism”, primarily prompted by federalism, the Emergency historiography, including data compilation, remains overwhelmingly ‘nationalist’ and Delhi-centric.

Beyond the discussion of the regime, what makes the book relevant to our present times is the issue of resistance. In a hard-hitting analysis on the lack of democracy’s defenders, the authors argue that historically, dominant leaders of the nation never embraced or espoused the core values of democracy. They agreed to it formally as it offered a collaborative arrangement between warring and competitive parties. Consequently, even while democracy as a concept best expressed and strengthened the nation’s diversity, it never led to a transformative and meaningful polity. During the Emergency era, this conceptual lack was compensated for by the term’s bargaining power for electoral purposes.

Predictably, barring individuals who dissented valiantly, sectors such as the media and the judiciary resisted the regime in a “circumspect fashion”. The Hindu Right’s resistance was ambiguous as the Rashtriya Swayamsevak Sangh chief negotiated from prison and the organization was more intent on opposing its ban than in defending democracy. While many mainstream leaders attempted to strike deals with the regime in the run-up to the national elections of 1977, the stance of political Left, or what was left of it after the Communist Party of India decided to support the Emergency, was ambivalent. The Communist Party of India (Marxist) refused to join the ‘rightist’ Lok Sangharsh Samiti but agreed to share seats with the Janata Party, which included the Jana Sangh. The authors argue that Mrs Gandhi lifted the Emergency at her own choosing since history does not show that she was compelled to do so because of the Opposition’s fight for democracy. For our contemporary times, these lessons of history presented in India’s First Dictatorship must be revisited and analysed.