The birth of Lord Rama 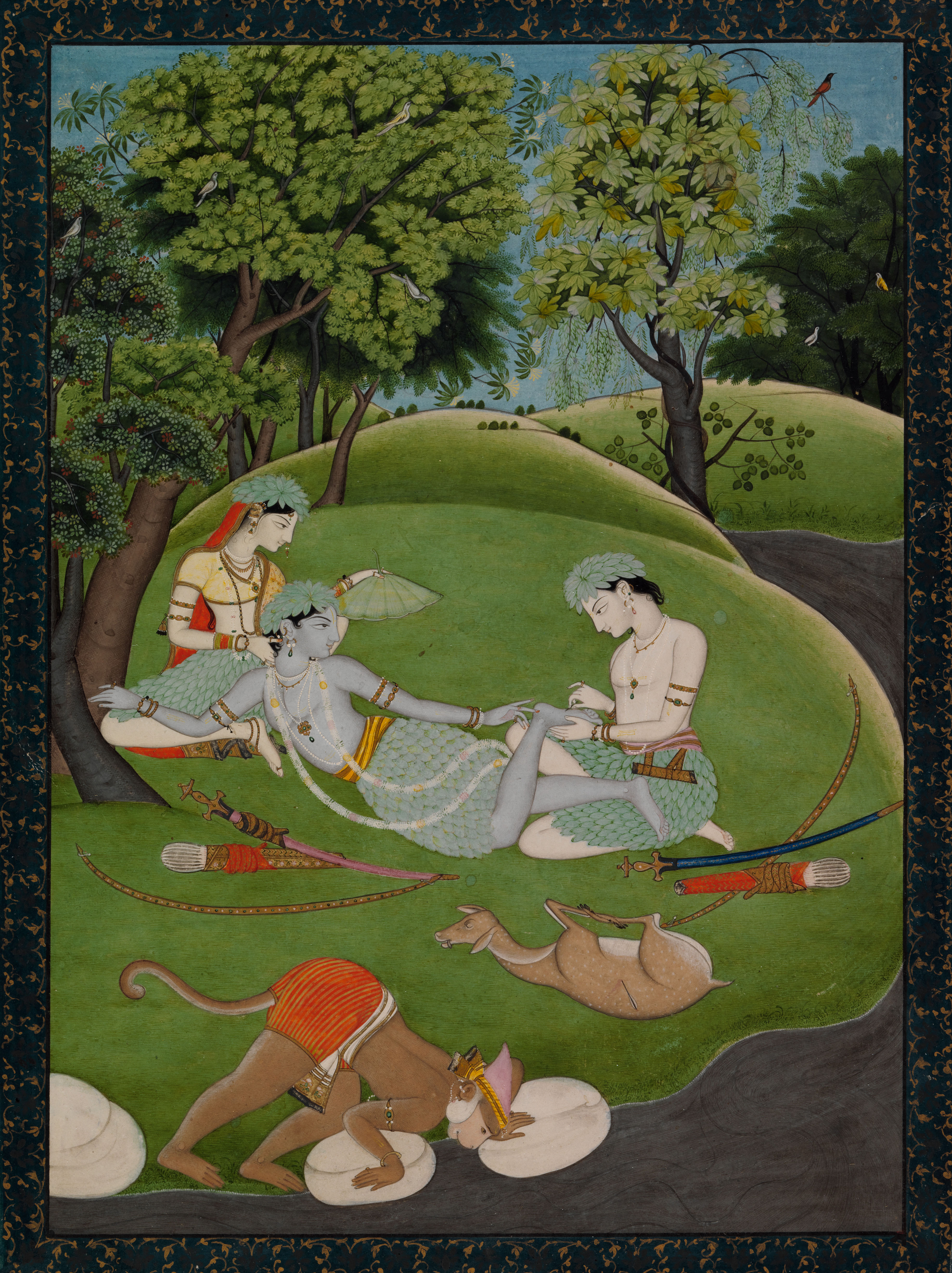 At that time, the effulgent king, the slayer of his enemies, was conducting a great sacrifice for the birth of a son. A huge being of immense strength rose out of Dasharatha’s sacrificial fire, heralded by a roll of drums. His dark skin gleamed with a red glow, his hair was the colour of a lion’s mane and he wore crimson robes. His voice was deep and resonant and he was adorned with all the auspicious marks. Tall and straight as a mountain peak, as mighty as a striding tiger, he wore celestial ornaments that were studded with jewels. Bright as the sun, glowing like a flame from a blazing fire, he carried a golden bowl that was decorated with silver and filled with payasa. He held the bowl out to the king, offering it to him as would a beloved wife.

‘King, know that I have been sent here by Prajapati!’ he announced. Dasharatha bowed to him and said, ‘You are welcome, blessed one! What can I do for you?’ The man sent by Prajapati replied, ‘Today you will receive your reward for worshipping the gods. Accept this divine payasa. It will produce sons for you and make you healthy and wealthy! Ask your wives to eat this one after the other and you shall beget the sons for whom you performed this sacrifice.’

Dasharatha’s queens were overjoyed with the events and their faces glowed with a radiance like that of the late autumn moon in the night sky. Dasharatha entered the inner apartments and said to Kaushalya, ‘Eat this payasa so that you can bear a son!’ and he gave half of it to Kaushalya and a third of it to Sumitra. Then he gave Kaikeyi an eighth portion and after some thought, he gave the remainder to Sumitra. In this way, he divided the payasa among his wives. His wives were filled with joy and they felt themselves truly honoured when they received the payasa.

Kaushalya gave birth to the fortunate Rama, who was endowed with all the auspicious marks. This son was a part of Vishnu and was the joy of the Ikshvaku clan. Just as Aditi’s glory was enhanced by Indra, so, too, Kaushalya’s glory was enhanced by the glory of her son. Kaikeyi gave birth to Bharata who was a quarter part of Vishnu. He was the essence of valour and was endowed with all the virtues. Sumitra gave birth to Lakshmana and Shatrughna, who were heroic and skilled in the use of all kinds of weapons. They represented the remaining parts of Vishnu. The four princes were born one after the other and they were all virtuous, handsome and effulgent.

The days passed easily and when spring arrived, Dasharatha’s mind turned to the sacrifice. He went to the godlike Rishyashringa. He bowed before him and asked him to perform the sacrifice that would produce heirs for the Ikshvaku clan. Rishyashringa agreed and said, ‘Have all the materials necessary for the sacrifice assembled and release the sacrificial horse!’

The king instructed Sumantra, the best among his ministers. ‘Summon the most eloquent brahmins and priests!’ Sumantra hurried off. With courtesy and respect, he invited all the priests who were well versed in the Vedas and their accompanying schools of knowledge, including Vamadeva, Jabali, Kashyapa, the royal priest Vasishtha and other excellent brahmins.

The righteous King Dasharatha honoured them all and spoke to them humbly, concealing nothing. ‘Despite my fervent wish for an heir, I have no son. That is why I have decided to undertake the horse sacrifice. I want the sacrifice to be performed according to the prescriptions laid out in the sacred texts. I hope to fulfil my heart’s desire with sage Rishyashringa’s assistance.’…

When the year stipulated for the wandering of the sacrificial horse ended, the animal was brought back and the king proceeded with the latter part of the sacrifice on the Sarayu’s northern banks. Led by Rishyashringa, the learned priests performed the rituals prescribed in the holy books for the great-souled king. Well pleased, the king completed this best of all sacrifices. Even for the greatest of kings, the horse sacrifice is not easy to complete, but it absolves the individual of all sin and ensures a place for him in heaven.

The king addressed Rishyashringa. ‘You who are true to your vows, only you can ensure the continuance of my clan!’ The best of all brahmins, Rishyashringa, said, ‘It shall indeed be so! You shall have four sons who shall uplift your clan!’

After meditating for a little while, the wise brahmin who was learned in the Vedas said to the king, ‘I will perform the rituals and recite the mantras prescribed in the Atharva Veda for the birth of a son. Your aim will be achieved by my recitation of these mantras.’ The sage poured oblations into the fire as he recited the prescribed mantras.

The gods, rishis, gandharvas and siddhas gathered to receive their appointed portions of the sacrifice according to custom. They took their places according to hierarchy and then spoke to Brahma, the creator of the worlds. ‘Lord, the rakshasa Ravana obstructs us all because of the favours that he has received from you. He is strong and brave and none of us can subdue him. Long ago, when you were pleased with him, you gave him a boon and now we have to suffer this constant oppression. Wicked Ravana is our enemy and he has already defeated the guardians of the three worlds. Now he wants to humble Indra himself! Intoxicated with the boon from you, that awful creature crushes divine rishis, yakshas, gandharvas, gods and brahmins. The sun does not shine and the wind does not blow in his presence and even the mighty ocean, garlanded with waves, is stilled. We live in constant fear of that rakshasa who has a terrifying face. You must think of a way to kill Ravana!’

Brahma thought for a while and then he said, ‘There is a way to kill this dissolute creature. “May I be invulnerable to gods, gandharvas, yakshas and danavas!” were the words Ravana spoke and I replied that it would be so. He was contemptuous of humans in general and so he did not ask for protection from them. Therefore, he can be killed only by a human being.’

Brahma’s words delighted and reassured the gods, the divine rishis and all the others. At that very moment, the effulgent Vishnu arrived at the gathering and after he had honoured Brahma, he took his customary place. The gods praised him with hymns and songs and then they said to him, ‘O Vishnu, we plead with you for the welfare of the three worlds! The king of Ayodhya, Dasharatha, is a righteous and truthful man, effulgent like a great sage. He has three wives and they are all chaste, beautiful and illustrious. Vishnu, divide yourself into four parts and go to earth as their offspring. Become a human being and destroy Ravana, the enemy of the three worlds, for he cannot be killed by gods or divine beings in battle! The rakshasa Ravana, encouraged by his own strength, obstructs the gods, gandharvas, siddhas and divine rishis. Destroy this creature who is the enemy of the gods, whose arrogance increases every day, whose roaring disrupts the meditation of ascetics. Release the holy ones from their fear!’… Vishnu considered the words of the gods and decided to choose King Dasharatha as his father.

‘This is what Sanatkumara told me long ago in the age of the gods. Tiger among men, you must go to Anga and bring Rishyashringa here yourself. Bring him in your mighty chariot with all the honour that is due to him.’

Dasharatha took Sumantra’s advice. After taking permission from Vasishtha, he went with his ministers to Anga. The entourage passed through forests and crossed many rivers. At long last, they arrived in the kingdom where Rishyashringa lived. They saw the best of all the brahmins, the son of Vibhandaka, blazing like a fire, seated beside King Romapada.

Romapada honoured Dasharatha and Dasharatha was filled with joy at their friendship. When Romapada told Rishyashringa about his friendship with Dasharatha, the wise sage was pleased and blessed the alliance. Dasharatha said to Romapada, ‘I have undertaken a very important task, ruler of the earth! Please allow your daughter Shanta and her husband to accompany me to my capital city.’ Romapada agreed and instructed Rishyashringa to take his wife and go with Dasharatha. Rishyashringa obeyed and Dasharatha embraced both him and his wife with deep affection as he praised the mighty king of Anga. Dasharatha bade his friend a fond farewell and then sent messengers ahead to Ayodhya so that the citizens could decorate the city for his arrival.

The citizens of Ayodhya were overjoyed when they heard of their king’s return and immediately set about to do his bidding. Dasharatha entered the beautifully decorated city and Rishyashringa was greeted with the sound of conch shells and drums when his arrival was announced. The people were delighted to see the brahmin entering their city, duly honoured by the terrestrial Indra as he would have been by the celestial Indra. Rishyashringa and Shanta were taken into the inner apartments of the palace were they were honoured according to the prescriptions in the holy books. The ladies of the palace welcomed the large-eyed Shanta and her husband with affection and happiness. Shanta and Rishyashringa, honoured even by the king himself, lived happily in Ayodhya for some time.

Even though he had performed many austerities in order to have a son, Dasharatha, who was great-souled, glorious and righteous, remained without an heir. One day, the king considered the matter again and thought, ‘Why don’t I perform a sacrifice to ensure the birth of a son?’ The wise monarch called together his ministers who were all intelligent men and said to his chief minister Sumantra, ‘Bring the priests and teachers here immediately!’

But Sumantra took the king aside. ‘Listen to the story that was told to me a long time ago by a priest who had performed many sacrifices!’ he said. ‘The blessed Sanatkumara told this story among a gathering of sages about the matter of your having a son.

‘It had been ordained that Vibhandaka, a descendant of Kashyapa, would have a son named Rishyashringa. This boy would live in the forest all alone with his father and would have no contact with other men and women. He would observe the double vows of brahmacharya that are well known in the three worlds and that are honoured by all the brahmins. Rishyashringa would pass the time looking after his father and performing sacrifices.

‘At this time, the brave and glorious king Romapada ruled in the land of Anga. But his misdeeds resulted in a terrible drought that inflicted great suffering on all beings. This made the king very unhappy. He said to the elders and the brahmins that had gathered at his court, “You are all learned in the moral and social traditions of the world! Instruct me in a suitable method of expiation!” The brahmins who were well versed in the Vedas replied, “Do whatever is necessary to bring the son of the sage Vibhandaka here with all the respect due to him! Then offer him the hand of your daughter, Shanta, in marriage.”…

‘And when Rishyashringa becomes Romapada’s son-in-law, a son will be born to you, King Dasharatha. This is what Sanatkumara, surrounded by sages, said to me,’ said Sumantra… 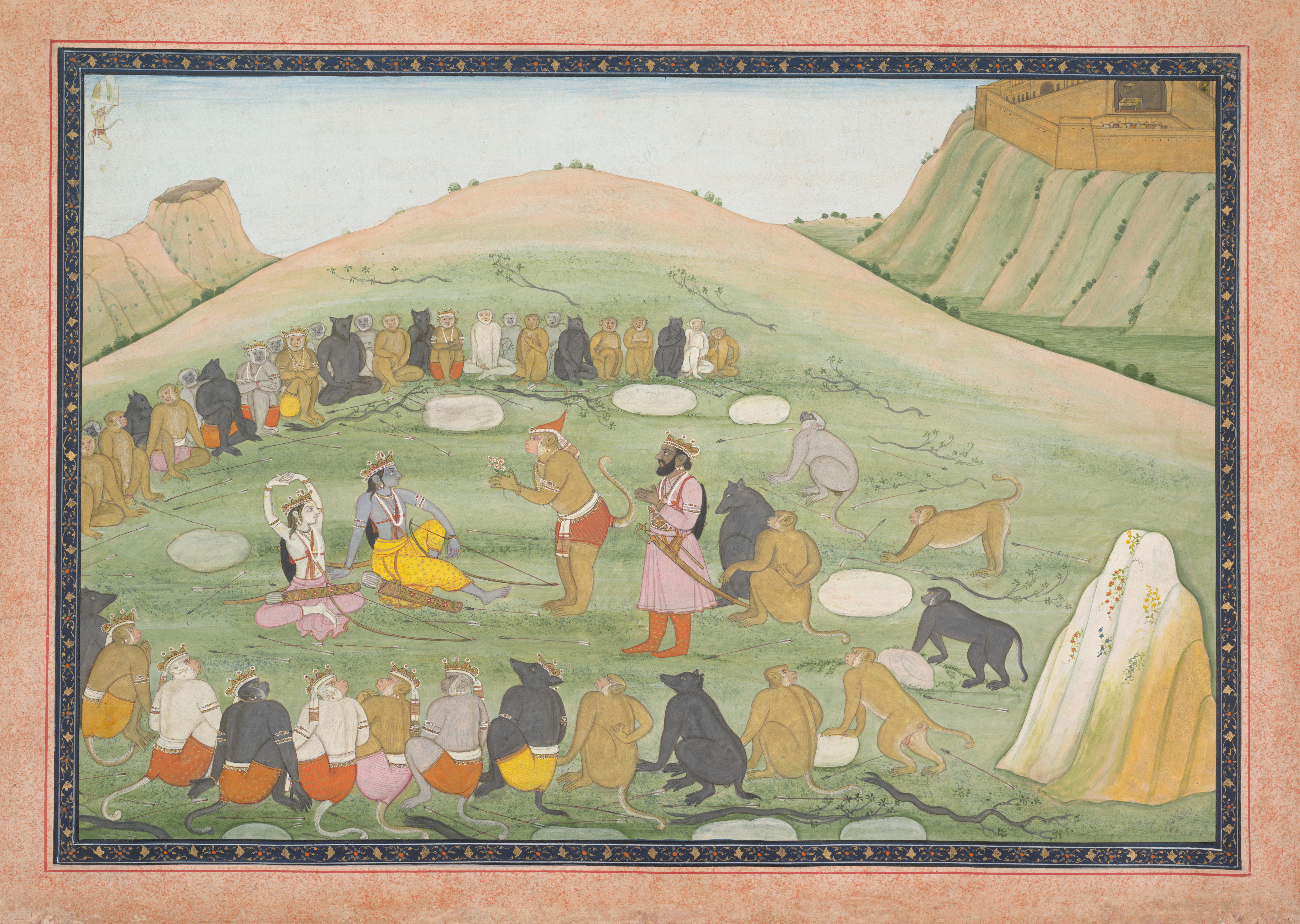 An ink and opaque watercolour on paper from the kingdom of Guler, Punjab, ca. 1790. The painting depicts Hanuman reviving Rama and Lakshmana with medicinal herbs
Photo Credit: The Metropolitan Museum of Art, Gift of Cynthia Hazen Polsky, 1987 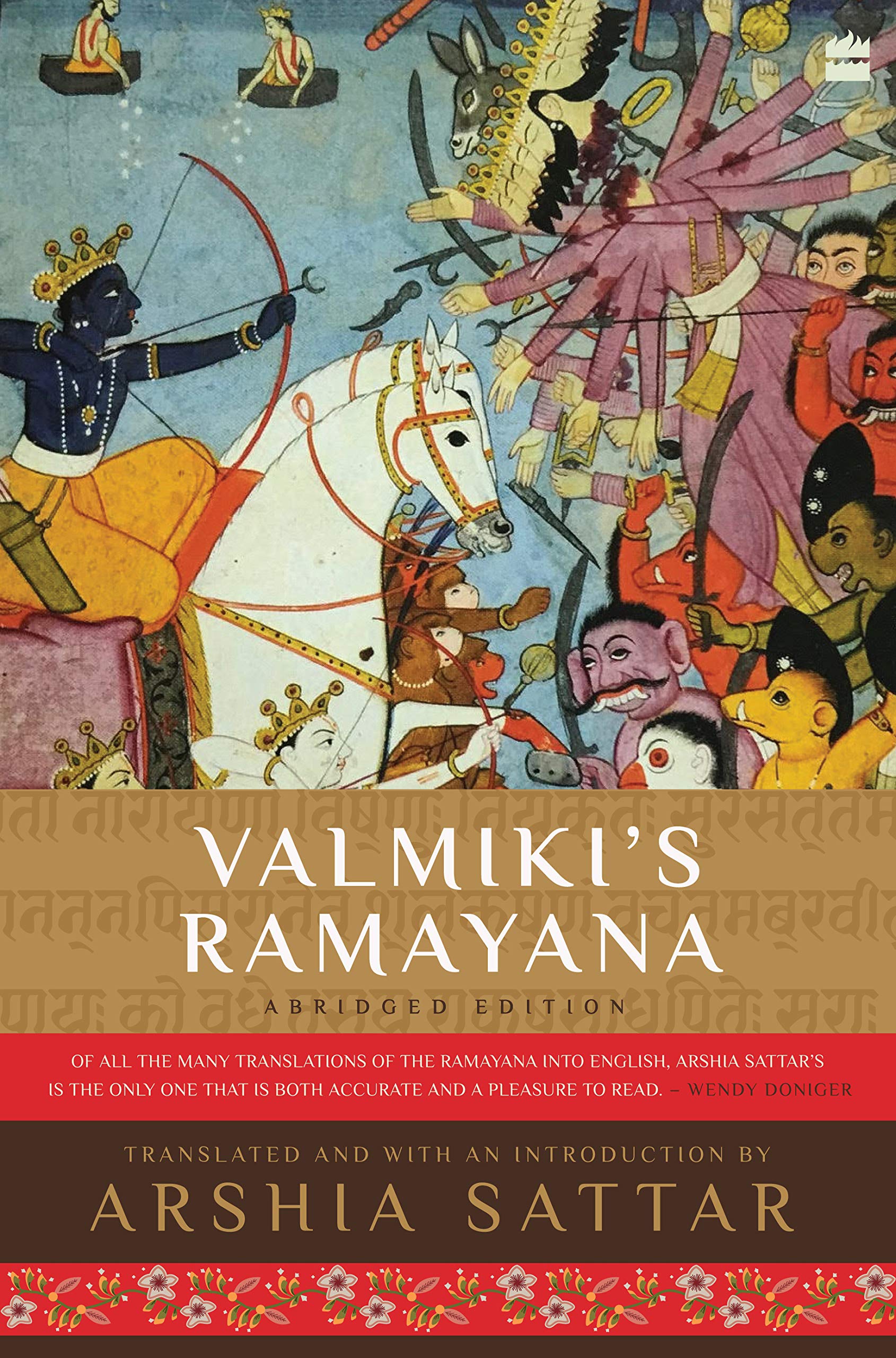