Story of a death foretold 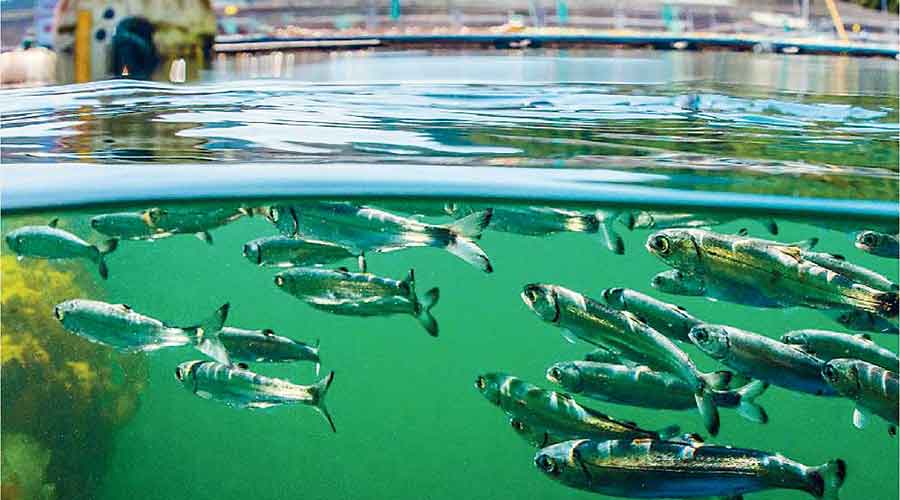 Representational image
Picture from Salmon: A Fish, the Earth, and the History of A Common Fate
Debjani Bhattacharyya   |   Published 25.06.21, 01:29 AM

Book name: Salmon: A Fish, the Earth, and the History of A Common Fate
Author name: By Mark Kurlansky,
Publisher, price: Oneworld, £18.99

A spectre haunts contemporary writing on the environment — and that spectre is Malthus. A beautiful book about a storied fish — the salmon — ends, rather unfortunately, with a note of fear for our earth with 11.2 billion people “demanding space and food”. One had heard such cries for lebensraum rumble through the killing fields of early 20th-century Europe. But this terrifying rumble has passed on to environmental writing without scrutiny.

In Salmon: A Fish, the Earth, and the History of a Common Fate, Mark Kurlansky has written a story of fish versus man where the fish — the wild salmon — are locked into a tragic fate in which the cost of mating is death in human hands. He asks whether fish and fishing can survive together? There is no denying that the salmon are dying. Human overpopulation aside, their death testifies to a transformed — climate-changed —ocean. Indeed, the salmon in this book are a lens into the history of the earth and our common fate.

Casting a wider net than the one he did when he wrote Cod: A Biography of the Fish That Changed the World in 1997, Kurlansky shows how overfishing, colonization, industrialization, urban expansion, the development of fish hatcheries and oceanic acidification are all contributing to the depletion of salmon stocks. The survival of wild salmon is the litmus test for the survival of this planet. As an anadromous fish — like the Bay of Bengal’s hilsa — they live partly in freshwater lakes and rivers and spend part of their lives in oceans. Thus, they act as a barometer, indexing changes in terrestrial and marine ecology and revealing the connections between human activities on the land and its cumulative ramifications on our oceans. If the effects of human actions on land flow through the rivers into the sea, then the salmon are an archive to read and write earth histories.

Interspersed with images of salmon and historical recipes, the early chapters take us through an oceanic, culinary and legal journey about biodiversity, food, law and statehood. Salmon had monetary value in 10th-century Europe and sometimes rent was paid in salmon during Anglo-Saxon times. From the Domesday Book to the Magna Carta, the salmon has been at the heart of English history, shaping common law traditions, regulating rivers, and solidifying property histories till the coming of industrialization when pollution became a sign of progress and the rivers of Europe turned practically salmonless. In contrast, the indigenous populations of Northern America fished its wonderfully abundant waters with spears, bone hooks and net weirs — the only form of fishing, according to Kurlansky, that would allow fish and fishing to survive together. Native American salmon myths contain allegorical warnings about overfishing. For example, what biologists today call ‘escapements’ — that is, a certain number of catches must be allowed to escape, spawn and replenish the stock — are nested in the various Native Americans stories about salmon.

Colonization of the Americas gave way to commercial fishing that depleted stocks as well as lumbering that destroyed habitat. For the colonists in the New World, nature was turned into a reserve: forest was timber, animals were hide, fish could be canned, and soil was subterranean property. That is why the remaining wild salmon populations are found in the Alaskan waters.

Moving between the scales of human and natural histories makes us realize this historically critical fish has a life cycle, which is rarely longer than six or seven years. This is unique for a sea-dwelling fish. But as Kurlansky documents, most salmon do not complete their life cycle as they are likely to be consumed by predators such as cormorants, seals, bear, fox, bald eagles, raccoons and, finally, humans. The humans stand out in this web of predators that encircle salmon life for it is ‘man alone who will eat themselves into extinction by killing off their food supply’.

Overfishing and salmon farming are among the main culprits in the story. While overfishing might have first been made possible by commercial trawlers and the European
colonization of the new world, the invention of nylon nets by the much-maligned DuPont in 1939 added to the woes. Throughout the book, Kurlansky is at pains to show how scientific progress in multiple areas has wreaked havoc upon the web of food in which the salmon live, mate and die. Farming fish and hatcheries are offered as the solution to the depletion of fish stocks, precisely because they allow us to bypass the destruction of habitats where the wild salmon thrive. Genetically modified hatchery fish, which are released into the ocean, are ultimately driving the wild salmon to the edge. This is where the solution turns into the problem itself.

As Kurlansky concludes, we may be left with the bland and tasteless salmon simulacra that is farmed and fished out of the hatcheries and may ultimately not know what the real salmon tasted like. And that will be the chronicle of the death of the earth foretold upon our very dinner plates.