A serial novel; The Romantics of College Street 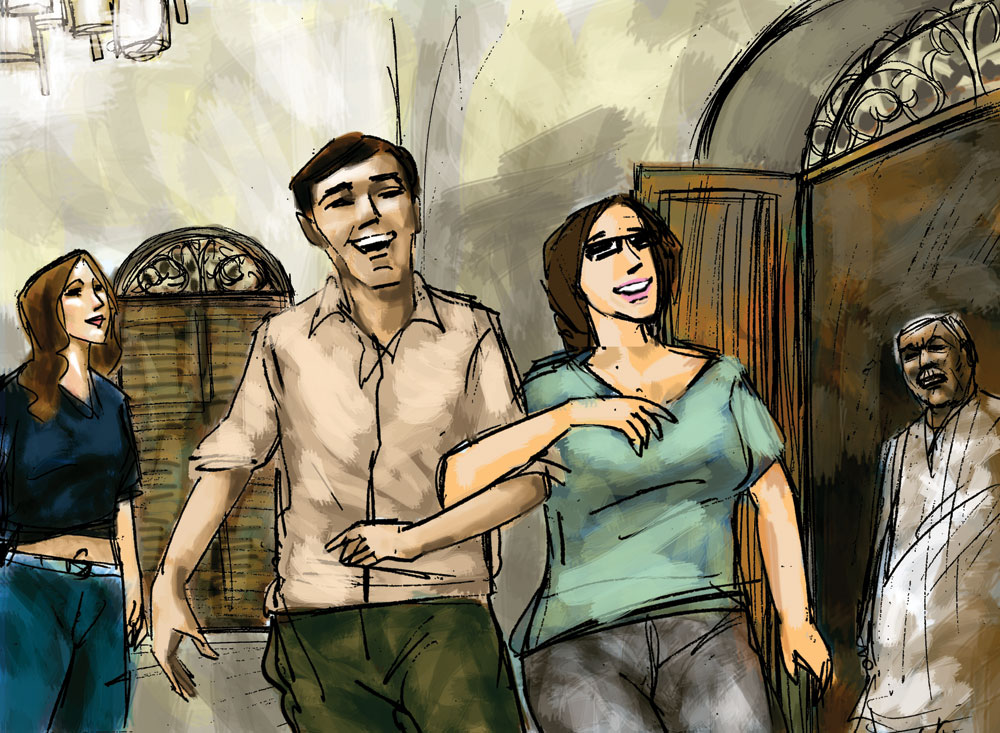 Recap: While Vik and Tilottama are well entrenched in Jampot — the latter lording over the management school, it appears — the city turns out to be somewhat of a dampener for Pixie as well as her mother, Nisha. And as Bappa tries to assure his wife that things will get better, it does so for Pixie that very afternoon when she makes a new (four-legged) friend.

In dating circles, there has always floated around a theory that every romantic relationship has a “reacher” and a “settler”. Like all self-respecting theories, it has, naturally, been debunked often. But whether because of some ingrained truth contained in its folds or simply because it sounds clever and cynical — we will never know for certain which — it persists.

If the autumn of 1997 was one long hot memorable Calcutta day, then in the brief dramatic dusk of that day, the sky streaked rashly with pink and orange, had someone sat Ronny Banerjee down by the quadrangle or the lovers’ lane in Presidency College and outlined this theory to him, he would have been the first to admit that as far as Charulata Ghosh was concerned he was the undisputed “reacher”. However, he would quickly go on to clarify, what he and Charulata Ghosh had, though, could not be called a romantic relationship. Not by a long shot.

“It can’t even be called a friendship,” Aaduri Bagchi would have said to that. She was the most likely candidate to have sat him down and sold him this theory. She kept up with global dating trends even though she had sworn off prem altogether. “What Luts and I have is friendship. What you have for Luts: it’s byatha, nothing more, nothing less.”

Byatha: as ubiquitous as prem in the vocabulary of Bengal but far subtler in implication. Prem was robust, a cat with nine lives. You might “fall” into it just as you fell into conversation about Godard or Derrida. Prem-e pawra was a rite of passage. But you could also, with varying degrees of agency or casualness, ‘do’ prem — prem kawra. Also a rite of passage.

Byatha was a different continent.

It hearkened to the sort of languid longing that Hindustani poets celebrated in Urdu poetry, that first prick of intense if sweet suffering, often unrequited, signalling the commencement of something momentous. It was also where our story really began, and to quote Aaduri Bagchi, “it was 200 or more years ago”.

Meanwhile, in the tea room off Park Street, with its fussy cutlery and famous cinnamon buns, the lost lens was not found. After her eyes had stopped watering and Ronny’s handkerchief had been put to good use mopping up her face, Lata reached two fingers into the other eye — Ronny winced perceptibly — and matter-of-factly extracted the other. “So much for my vanity,” she said and shucked the lone lens into a little white lens case that had emerged from her bag. “And now I’ll be squinting until I get home. I should have stuck to the glasses instead of trying to get lenses for the wedding!”

“Whose wedding?” Ronny asked casually, carefully concealing the sudden irrational panic that gripped him, a feeling that was so far-out and so ridiculous that he was embarrassed even in the act of careful concealment.

“Oh, I thought you knew,” Lata replied, her eyes finally focused onto his face. They were no longer wet. Even so, they seemed different somehow, Ronny thought.

“Molly, my cousin. Do you remember her?”

It was as though a weight had lifted. “Of course I remember Molly. In fact, I ran into her once or twice when she was studying at JU. I used to take a few classes for the film studies department those days.”

“Am I talking too much?” Ronny asked himself.

“So. Our Molly is marrying your friend Bobby’s cousin, AJ.”

“My colleague, Bobby. I have in fact been invited to this wedding. Posh one. Taj?”

“Oberoi,” Lata corrected him, “And Bobby and I have been designated liaison officers.”

In response, Lata merely smiled. Somewhere, a violin concerto started up and the hearts of stone gods melted a little. Ronny sat up straighter.

Lata tucked her hair behind an ear as she explained: “You know the Ghoshes and their propensity to wreck stuff? My job is to ensure that nothing unseemly happens, and the wedding doesn’t get ruined, in any way whatsoever, by our extended clan.”

“Boro Jethu?” It was now Ronny’s turn to smile.

Though it had been at least a decade-and-a-half that she hadn’t thought of it, Lata remembered the episode. Her twentieth birthday party. Ronny and Aaduri and the rest of the gang had been invited by Manjulika to lunch. Outside the formal dining room downstairs, Boro Jethu had announced loudly to Jethi, well within everybody’s earshot: “That’s the boy, the one with the hangdog expression. Saw him? Comes and goes all the time. Can’t expect Manjulika to run a tight ship or keep an eye on her daughter. I made it a point to speak to him. As a guardian. I presume all this photography, filmmaking nonsense will pass, and he’ll take the WBCS exam like his father. But good she’s found someone at least. I was always afraid she would fall into the oti-boro-sundari trap.”

That day, she now remembered, she had worn a pair of ripped jeans. It was the global rage that season and she had saved up for months for it, even though Manjulika kept telling her it would be cheaper to buy a regular pair and rip it herself. She remembered the hot flush that had passed through her as Boro Jethu’s highly audible voice entered the room, booming off its dusty corners. (Manjulika and Nimki were in the kitchen.) They were all Bengalis that afternoon and everyone knew the proverb — the greatest beauty doesn’t find a husband, the finest home-maker never gets her house — and even though they were all radicals, naturally believing neither in the institution of marriage nor in the art of home-making, Boro Jethu’s tone had lodged somewhere deep in Lata’s psyche.

But before her eyes could fill with tears, Aaduri had linked her arm with Ronny and hummed their new favourite Chandrabindoo song, “Jodi bawlo hyaan, BCS e boshe jaabo aami....”

Ronny joined her immediately, adding the gentle baritone of his beautiful singing voice to Aaduri’s. The two of them swayed their way to Lata: “Jodi bawlo naa, aaoraabo Joy Goswami.”

And, somehow, the afternoon of her twentieth birthday was redirected towards its original agenda: food, pointless never-ending conversation that provided such energy and joy, and music. At one point, Ronny forced them to see his documentary on a middle-class travel group’s journey to Sikkim (His family had been a part of that travel group and the “mockumentary”, long before mockumentaries became fashionable as a genre, was very funny. They wouldn’t dream of telling him that though. They’d complained constantly about having to watch it.) Eventually they hunkered down, listened to the mix-tape Aaduri had made Lata, and surreptitiously smoked ganja.

They were 20, Lata now saw them curled up on her four-poster bed. At 20, they’d felt they would live forever. They’d climb the highest mountains and dive into the deepest oceans — maybe simultaneously — and save lives and make art and find love and be happy. Oh, future happiness. They had never questioned its reliability or the specificity of its future location. Happiness was right ahead. They were just impatient to get to it.

“Boro Jethu, by the way, is now the custodian of liberal values. Ever since Goopy came out,” Lata smiled.

“Goopy wasn’t a half-bad guitarist, you know.” Ronny reminisced. “Much as we liked to loathe him.”

And then Bobby appeared. She had taken charge of ordering tea when she’d spotted the odd reunion. While in the queue, she had added up the details she knew about Lata and Ronny individually, working out how it all sat with his body language. Now she arrived at their table with a very large tray: pot of tea, milk and sugar on the side, and a tidy three-tier stand with little cakes and sandwiches.

Both Ronny and Lata stood up to help, but it was unnecessary. With single-minded efficiency, Bobby apportioned the tea into the dainty porcelain cups on the table, asking Lata how much milk and sugar, one sandwich, a piece of cake? It left them with nothing to do to stave off the awkwardness that had settled upon the table, one that Bobby, peculiarly, seemed to enjoy.

For all his spying on the comings and goings of “that boy”, Boro Jethu had never guessed that Ronny and Lata weren’t a couple, not exactly, not until the night of her twentieth birthday.

Ronny greatly preferred email to the phone. For one, Lata and Manjulika did not have an extension up in their quarters so he had to depend on the largesse of the eccentric Ghoshes to even get her to the phone. For another, his poetic soul soared with the written word, typing out long quotations and chatty missives almost daily.

The night of her twentieth birthday party, though, his email was brief.

“Should I be spouting Joy Goswami?”

Hers had been briefer.