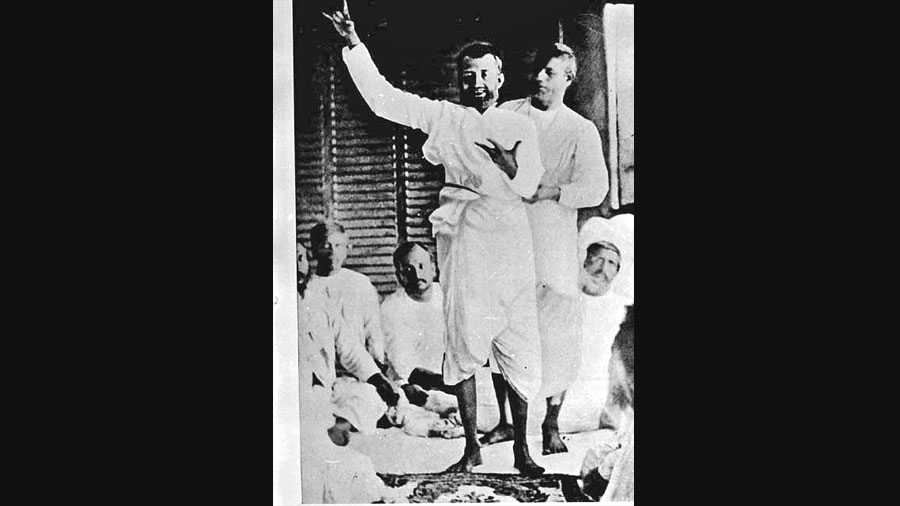 Is the Sri Sri Ramakrishna Kathamrita, a continuum of the oral spiritual tradition in India, similar to the Upanishads, the Bhagavad Gita and the Ramayana? Sreemati Mukherjee claims so in her newly published book, The Many Dialogues of the Sri Sri Ramakrishna Kathamrita. Mukherjee has written — not just another book about what Sri Ramakrishna taught but — a literary analysis of his dialogic method of teaching. It offers an interestingly different perspective from which to study it. Sri Ramakrishna had such a profound influence upon the intellectuals of his time that each succeeding generation has tried to understand it in its own mode and medium.

Debate was characteristic of social and intellectual life during the 19th century. Sri Ramakrishna encouraged his intellectual devotees to debate such questions as god’s existence and the nature of human responsibility in the world, making the text of the Kathamrita both timeless and contemporary. The dialogic method of the Kathamrita, Mukherjee points out, makes the characters come to life through their words and actions and recreates a mood and a picture in the reader’s mind of the traditional, colonial environment of 19th-century Bengal. The Kathamrita dialogues include “speech tags”, words that tell the reader who is speaking and how they are speaking, and a character’s background.

The Many Dialogues of the Sri Sri Ramakrishna Kathamrita by Sreemati Mukherjee, Hawakal, Rs 650
Amazon

Sri Ramakrishna convinced people of the truths he realized with a profusion of analogies from science and observation of everyday life with keen psychological understanding. For example, to show the power of Maya to bind a person, he points out that the minute one gets a pen, he will immediately start writing. He says, “If an Indian wears boots like the English do, he, too, will start climbing the stairs two at a time, as the English do.” In another example, for the people of Calcutta living in the midst of innumerable ponds dotting the landscape, he explains how the atman, in the joy of spiritual realization, is comparable to the fish swimming in a pond on Moti Seal’s property in Belgharia: “Satchitananda is like the clear water in a pond covered with scum. When the wind blew the scum away a bit one saw the water. However, soon the scum came dancing back again.” The scum represented Maya and the water, Satchitananda. To the writer, Bankim Chandra, who gives a saucy reply when asked about the purpose of life, Sri Ramakrishna replies, comparing a learned person with a vulture that soars very high in the sky while all the time its attention is focused on the carrion on the ground which it desires to eat.

The main dialogues in the Kathamrita are the subjects of the chapters of Mukherjee’s book. In one of these chapters, “Symphonies of Dance, Song and Epistemology”, Sri Ramakrishna’s dialogues with Narendranath are discussed. Mukherjee points out that the repetition of songs throughout the book gives a resonance to the text. Among other chapters are: “Sri Chaitanya as Affect and Epistemology”, “Sri Ramakrishna as Poet and Philosopher” — about his dialogues with Keshab Chandra Sen, “Redeemer and Redeemed: Girish Chandra Ghosh and Sri Ramakrishna”, “Science in Dialogue with Bhava or Ecstasy: Dr. Mahendralal Sarkar and Sri Ramakrishna”. Some of the other dialogues in the Kathamrita discussed are: “The Dialogism of Shakta Epistemology and the Upanishads”, “The Dialogue of Western Literature and Philosophy with Indian Myth and Sri Ramakrishna’s Thought”. In these chapters, Mukherjee analyses why the Kathamrita is a powerful book in terms of literary criteria. Hawakal has done a very attractive job of both the cover and the design of the text.