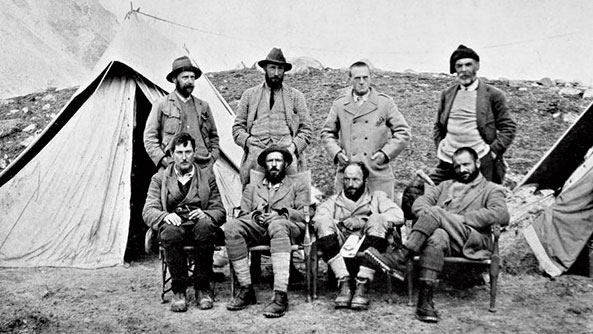 The peak that is now known as Mount Everest isn’t simply there as a fact of nature; it had to be invented. Although the planet’s tallest peak has been an indelible part of the Himalayan landscape for eons, its naming, classification, mystical aura and status as an object of a ‘hunt’ aimed at conquest (the “third pole” to be conquered after the North and the South) are intertwined with human histories. The great merit of Craig Storti’s account of the first Everest expedition of 1921 is that it shows how this British-led mission to find the mountain is a coalescence of multiple narratives.

The first narrative is geological — the highest point on the planet was “once at the bottom of the Tethys Sea”, but after a piece from the super-continent, Gondwana, broke off and collided with Asia, the Tethys sea-bed was pushed up to form the Karakoram-Himalayan range. One wishes that Storti had spent more time tracing the history of the Tibetan name for the mountain — Chomolungma — instead of offering a cursory discussion that spans two pages. This absent discussion could have traced local histories of the mountain and challenged the construction of the region as terra nullius by European men (note the gender).

The strength of the narrative lies in the way Storti plots the story of the ‘discovery’ of the mountain at the juncture of the history of mountaineering, the complicated and dangerous manoeuvres of the colonial ‘Great Game’ (Rudyard Kipling’s Kim, often erroneously attributed with coining the term, begins and ends with threats in the two hilly realms of the Game’s great arenas, Afghanistan and Tibet, which are also major settings in The Hunt for Mount Everest), the story of the Survey of India’s massive attempt at surveying and mapping the Indian subcontinent, and personalized narratives of some of the figures associated with the ‘hunt’, such as George Everest, Radhanath Sikdar, Francis Younghusband, Alexander Kellas and George Mallory, among others. Storti’s critical observations about some narratives are astute. For instance, in his discussion of the European history of mountaineering, he writes: “If Mount Everest had been discovered seventy-five or even fifty years earlier, almost no one would have noticed. Indeed, apart from the protection they offered as natural barriers, there was nothing about mountains that recommended them to mankind for most of human history... ”

Although mountain-dwellers would probably disagree with this unilateral depiction of “mankind”, Storti lays a finger on how advances in mountaineering in Europe, allied with the colonialist desire to conquer nature, made the planet’s tallest peak available as an object of conquest in the imagination of men. My emphasis on men in both paragraphs above is a gesture towards a consideration of the narrative form of masculinist tales of colonial adventure, which Storti’s account both draws upon and departs from. To Storti’s credit, his narrative voice maintains a critical distance from the anthropocentric hubris of imperialist adventurers. He also treats the nationalist desire to conquer ‘hostile’ nature with a critical gaze — an example is his sympathetic treatment of the personality of the self-effacing and conscientious Alexander Kellas as opposed to the subtle critique of larger-than-life, mythologized personalities like the “Russophobe” military-man, Younghusband. It is unfortunate that this critical distance maintained with the protagonists of the story dissipates towards the end of the narrative as they, and Storti, hurtle breathlessly towards the climax. Here’s an example where Storti quotes one of Mallory’s letters discussing the 1921 expedition’s sirdar, Gyalzen: “The organisation... never did run smoothly so long as we employed, as an indispensable Sirdar, a whey-faced treacherous knave whose... incompetence was only less disgusting than his infamous duplicity.”

If Storti glosses such quotations with his commentary in the earlier half of the narrative, here we move directly to another event without any expansion on his part. As a result, the narration skews towards Mallory’s perspective with no possibility for an alternative viewpoint intervening and complicating the tale. This remains as a disappointing element in an otherwise engaging narrative that covers a formidable amount of historical ground.