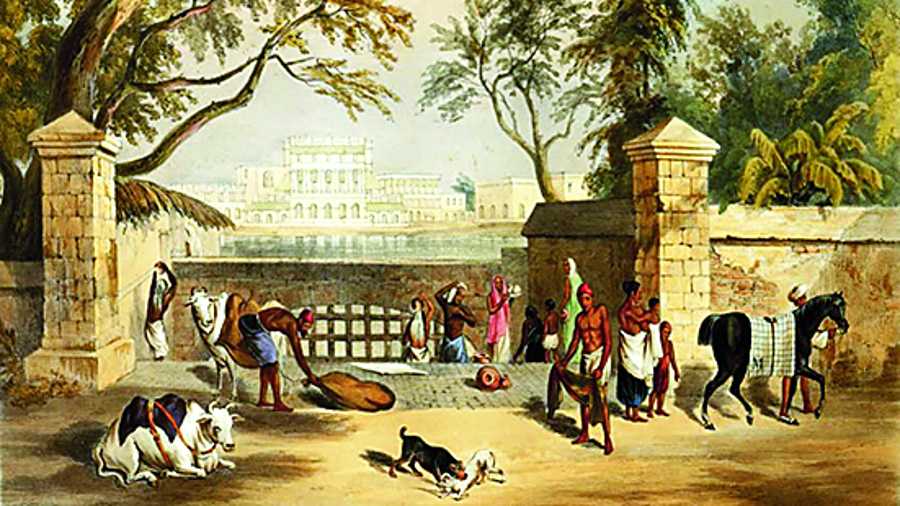 An illustration from Sir Charles Doyly’s Views of Calcutta and its Environs
Wikimedia Commons
Sumit Chakrabarti   |   Published 14.01.22, 12:27 AM

The title of Samiparna Samanta’s book, Meat, Mercy, Morality: Animals and Humanitarianism in Colonial Bengal, 1850-1920, provokes the curiosity of the lay reader and the trained academic alike. Three distinctly different, albeit related, paradigms of understanding the human are brought together within a singular framework of analysis and made to focus on one of the most widely-discussed rubrics of South Asian history, that is nineteenth-century Bengal. While Samanta draws from important works on related subjects of disease and cure, the practice of indigenous medicine, studies on epidemics, cultures of consumption in nineteenth-century Bengal done by historians such as Pratik Chakrabarti, Projit Bihari Mukharji or Rohan Deb Roy, her choice of subject matter has a novelty that would add newer perspectives to the field of South Asian history in general and nineteenth-century Bengal in particular. To my mind, Samanta’s intervention in this book will reassess the understanding of material culture in colonial Bengal, an analysis that has generally been trained either on the human or on the inanimate subject but rarely on the domesticated animal, or what the author calls the “non-human animal”. While pointing out this gap in the scholarship on South Asia, Samanta asserts: “I reframe the history of domesticated animals — cows, horses, bullocks, goats — that inhabited both urban and rural spaces to understand what their stories reveal about a colonial government.”

Samanta locates her analysis at the intersection of three distinct analytical frameworks — the history of science, environmental history, and urban history, and what emerges on the other side is a study of a complex network of colonial governance, modernity, indigenous belief systems, nationalism, and other fraught narratives of social and cultural history — all of them curiously read through the lens of cattle management and animal husbandry. In four elaborate chapters, the book illustrates notions of embodiment and speciesism read against the grain of imperial and cultural histories that straddle studies on humanitarianism and ethical debates, veterinary practices across synchronic and diachronic frames of the modern and the non-modern, cultures of food and consumption, and ideas of cruelty and animal protection. Placing the animal at the centre of her study, making it an agent of history, the author reframes or reformulates the debates on representation and historical practice within South Asian historiography. The question of the margin, of the relegated, of the forgotten is revisited not through the colonizer-colonized binary, but through the unique interface of the human-animal encounter, the possibility of a dialogue between the farmer and his bullock, or between the bhadralok and his sacred meat from kalisthan (the site of goat sacrifice for the goddess, Kali). The foreignness or derivative nature of the author’s choice of a theoretical framework is subtly countered by an unsettling of normative choices in the act of writing. Samanta provocatively writes: “It is an accepted scholarly practice that writing on specificities other than Anglo-American is constantly expected to qualify itself by name and location. As ‘Western’ is taken to be the norm, the local is often expected to be clarified. While fully aware that I am writing for a global readership, I will attempt to challenge this hegemonic discursive discourse in my book by taking the South Asian context as the norm.”

There is a nuanced dialogue in the narrative between the theoretical and the empirical, with post-human analytical tools used to unpack the archive, or the overarching rubric of scientific knowledge on rinderpest or other epizootics read against the grain of localized practices of cure and care done by the go-dagas (local quack cattle doctors) or the go-baidyas. Sometimes, the very idea of animal slaughter or the economics of consumption is read against philosophical arguments on compassion or the ethics of care drawn from ancient indigenous texts, or nationalist arguments on the virtues of vegetarianism. Drawing her examples from literary texts and contemporary vernacular periodicals, instruction manuals both indigenous and otherwise, the author opens up a crucial and erstwhile neglected critical space where a dialogue between the modern and the pre-modern, between emancipatory scientism and repressive imperial practice, is possible but from within a distinctly different paradigm of the human and non-human animal interface. No doubt, one of the most important class markers of nineteenth and early twentieth century Bengal, that of the bhadralok, is critically revisited and reassessed across the scope of the book.

There are, however, a few minor pitfalls in this otherwise significant monograph. Whereas it is inevitable that major tropes of the central argument will recur, some discussions, for example on science practice or compassion or the role of the Bengali middle class, may come across as repetitive. Likewise, the category of the Bengali middle class, significantly fraught and heterogenous, has remained largely unproblematized for most part of the book, although it is evident from the footnotes that the author is well aware of the nuances of the category of the ‘middle class’. As a reader, one feels that a more broken-down analysis of the middle class may have added greater texture to the important argument that the author is making in the book. Also, while the category of the bhadralok has been used throughout, and the author’s use of the term already explained in a footnote as early as Page 4 of the book, another footnote on the bhadralok well into the book — on Page 135 — seems somewhat unnecessary and confusing. This said, there is little doubt that the book makes a unique and significant contribution to the oeuvre of South Asian history and a particularly important intervention in the way one thinks about nineteenth and early twentieth century Bengal.